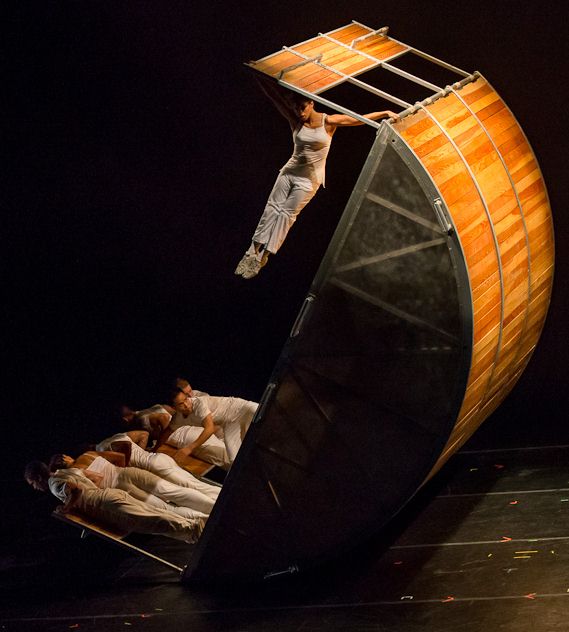 The World-Renowned Diavolo, a Los Angeles-based dance company known for its unique “architecture in motion” style

The world-renowned Diavolo Dance Company, a Los Angeles-based dance company known for its unique “architecture in motion” style,uses dance to explore the relationship between the human body and its architectural environment. The diverse team of dancers, designers, choreographers and engineers, create visceral and awe-inspiring works that reveal how individuals are affected emotionally, physically and socially…

The world-renowned Diavolo Dance Company, a Los Angeles-based dance company known for its unique “architecture in motion” style,uses dance to explore the relationship between the human body and its architectural environment. The diverse team of dancers, designers, choreographers and engineers, create visceral and awe-inspiring works that reveal how individuals are affected emotionally, physically and socially by the spaces they inhabit.

Diavolo performed L’Espace du Temps in summer 2014 at the Movimentos Festival in Wolfsburg, Germany. The performance at VPAC will be the first time that the trilogy will be performed in the United States and with live orchestral accompaniment. Works by Philip Glass, John Adams and Esa-Pekka Salonen will be performed by the New West Symphony and conducted by Los Angeles conductor Christopher Rountree. He is the director of Wild Up, Los Angeles’ modern music collective.

This American premiere of the full-length version is made possible by a re-orchestration of Salonen’s score, scaled to fit the ensemble in VPAC’s orchestra pit and to use instrumentalists who play in the other two pieces. Rountree, who is also a composer, will oversee the scaling down, with Salonen’s approval. Rountree and Wild Up have performed at Green Umbrella, the LA Phil’s contemporary music series founded by Salonen.

An Evening With Diavolo Dance Company

A wild mash-up between Cirque du Soleil and American Gladiators with Vegas-style showmanship.

For 20 years, Diavolo has been Los Angeles’ wild child, a company of daredevil dancers leaping and cavorting on pitching wheels, Goliath walls and other playground equipment from a super-size Wonderland.

Heim puts his feel for props, his knack for kinetic drama and his taste for danger in the service of a metaphor, and the result is dazzling.