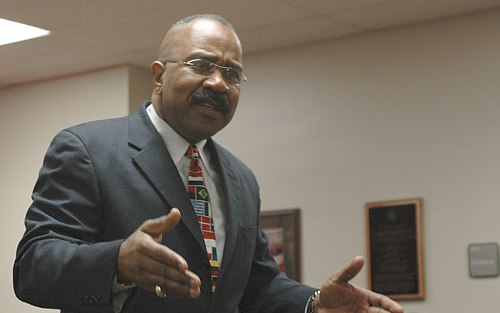 Dr. Dennis Rahiim Watson is a motivational speaker who has received hundreds of commendations, including ones from notable names such as President Barack Obama, President George Bush and Secretary Hillary Clinton. From Ord Road Paget, he is the son of Mrs. Eula Watson-Stewart. He attended school locally, dropping out of Robert Crawford School for Boys…

Dr. Dennis Rahiim Watson is a motivational speaker who has received hundreds of commendations, including ones from notable names such as President Barack Obama, President George Bush and Secretary Hillary Clinton. From Ord Road Paget, he is the son of Mrs. Eula Watson-Stewart. He attended school locally, dropping out of Robert Crawford School for Boys in Devonshire.

He went back to school, attended university and became the CEO of the Center for Black Student Achievement and Chairman of the National Youth and Gang Violence Task-force, both located in the USA.

He has lectured at hundreds of colleges and universities throughout the United States and the Caribbean. Mr, Watson has also spoken in numerous African nations; Africa; Senegal, Zimbabwe, Ghana, Nigeria, Gabon, Cote d’Ivoire and South Africa.

He has received literally hundreds of awards including multiple White House citations. Dozens of American cities have declared a “Dennis Watson Day”.

A quarter-century before Barack Hussein Obama was elected as president, he was portrayed by Dennis Rahiim Watson on college campuses across the country. Watson didn’t know the genuine equivalent to his one-man show ? “The First Black President of the United States” ? would become a reality within his lifetime. But he understood the importance of inspiring students to think and act in a manner that could lead them to reside at 1600 Pennsylvania Avenue in Washington, D.C.

“It seems like yesterday,” said Watson, a motivational speaker/activist who helped turn out the youth vote for Obama in 2012 and 2008. “The show included a mock press conference with the audience asking the president about domestic and foreign policy. Howard University was one of the first major institutions that brought me on campus. As a result of the response I got there, I’ve spoken at more than 200 universities and been known as ‘The First Black President’ for 30 years.”

A second term for the nation’s 44th president was far from guaranteed during the 2012 campaign. Many observers questioned whether young voters, predicted to play a crucial role, would demonstrate as much energy and participate as they did in 2008. But according to the Center for Information and Research on Civic Learning and Engagement (CIRCLE), the turnout for voters aged 18–29 was 50 percent in 2012, the same rate as in 2008

About 60 percent of those young voters supported Obama, and they were especially vital to his victory in the battleground states of Florida, Ohio, Pennsylvania and Virginia. “If you wipe out the youth vote [in those states], or if you allocate the vote for [Obama and Mitt Romney] 50-50, those states switch from blue to red,” CIRCLE director Peter Levine said in a conference call with reporters. “It’s enough to make Romney the next president.”

Watson said the effort among young voters ? 70 percent of whom had at least some college education ? was “phenomenal. There was a lot of enthusiasm, particularly among White students and Hispanic students,” he said. “There was more enthusiasm in 2008 because Barack was a novelty and George Bush was hated. Now that Barack is a known commodity, people got reserved. But when Romney was chosen, the energy jumped up.”

Energy levels don’t seem to be a problem for Watson, who in addition to making numerous speaking engagements, also serves as chairman of the National Youth and Gang Violence Task Force, as well as president and CEO of the Center for Black Student Achievement. He’s preparing to embark on a 26-city national tour to deliver what he calls “a Barack Obama message” for students of color: “No Excuses ? Think, Talk, Dress and Act Like a Winner In a Globally Competitive World.”

Watson is concerned that too many students are taking their studies lightly, viewing their college experience as one big party. He’s concerned that a growing number are engrossed in trivial matters such as celebrity gossip and scandals as opposed to consequential developments in their communities, nation and worldwide. And he’s really concerned about the deteriorating language skills among some students, especially those who hardly can communicate without peppering their comments with curse words.

“Black students have to learn to master the English language and learn to debate at the same level as Barack Obama,” Watson said. “Other ethnic groups on campus are moving ahead and getting entrepreneurial skills while we’re listening to nonsense and engaged in high levels of profanity. We’re at major academic institutions and acting like we’re in the ghetto.

“Barack and Michelle Obama have been a blessing from God for Black people,” he said. “They’re family people, married for 20 years. They have two wonderful children who are on the right track. We have this window of opportunity when we should be turning out doctors and lawyers and thinkers at a phenomenal rate. There’s no time to play. If Obama hadn’t won the second and third debates, it’d be over. Debating for us has to become the norm, and we have to stop celebrating foolishness.”

Watson acknowledges that the majority of students don’t fall into that category. But he’s worried about the “knuckleheads” who lead groups of people in the wrong direction and distract students who are serious about success. One of his workshops delivers a pointed message to women, in which he questions the choice of partners who are “thugs, playas, nuts, fools and crazy men.”

He has firsthand knowledge on knuckleheads; he was one growing up in New York, kicked out of high school 37 times. But he overcame the odds and went from Harlem Preparatory School to study at Fordham University, Pace University and New York University. He has spent the last three decades on a mission, inspiring young people to be “visionaries, thinkers, entrepreneurs, activists, job creators, innovators and academicians.”

Obama’s presence in the White House helps. But it also can create a false of sense of achievement, a feeling that any and all battles are over. Watson nips that thought in the bud for students.

“I’m trying to bring an end to violent speech, profanity and lowlife fashion,” he said. “We have no time to play. Every ethnic group in America is dying for leadership positions. We’re still at the bottom. I have to share with students the ABCs of leaderships, success and achievement.”

An Evening With Dennis Rahiim Watson

Think, talk, dress and act like a winner in a globally competitive world!

The State of our Black Community

We know what our young people need, especially our boys. They need education and opportunity, and strong role models who can lead them toward responsible adulthood away from the temptation of gangs and making a quick buck. You have been such a role model, working tirelessly in high schools, colleges, churches and prisons and many other places where there are people who needed to hear the message that they can do well for themselves and be a blessing to their neighbours at the same time. For over three decades, you have been a strong voice for good in our communities.

Word has reached me that you have established an outstanding record of community service. I congratulate you on your achievements. Some of the most important values on which our nation was founded are duty, commitment, acceptance of personal responsibility, and respect for every individual, a respect that is expressed through direct or consequential action. Efforts such as yours show that these values are still embedded in the American character. Barbara joins me in wishing you every success as you continue to set a fine example for your friends and neighbours.

His tireless efforts to encourage and inspire black youth to be responsible citizens by promoting peaceful solutions to conflicts.