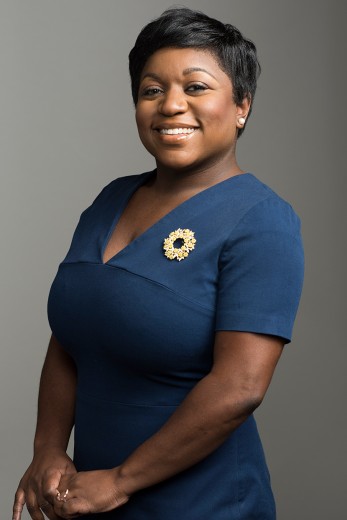 A Philadelphia native, Deesha Dyer’s unconventional story is woven together by themes of heart, dedication, and an incessant quest for excellence. After graduating from Milton Hershey School, a private philanthropic boarding school in Hershey, PA, college seemed inevitable. She enrolled in a four-year university, but returned home shortly afterward due to financial hardships. Never one…

A Philadelphia native, Deesha Dyer’s unconventional story is woven together by themes of heart, dedication, and an incessant quest for excellence. After graduating from Milton Hershey School, a private philanthropic boarding school in Hershey, PA, college seemed inevitable. She enrolled in a four-year university, but returned home shortly afterward due to financial hardships. Never one to be deterred by setbacks, the self-proclaimed “come-back kid” began strategizing her next move.

Deesha landed a position as an assistant at the Pennsylvania Real Estate Investment Trust, where she honed her skills of detail orientation and project coordination. Her side-gig as a freelance hip hop journalist was the perfect complement to her day job, teaching her how to exercise resourcefulness and work with a variety of personality types to complete her story assignments.

At the age of 30, Ms. Dyer returned to school and pursued a degree in women’s studies. While taking classes at the Community College of Philadelphia, she became an intern in the Office of Scheduling and Advance at the White House. This opportunity would be the start of her seven-year tenure at the White House, where she served the Obama Administration in a variety of positions such as Associate Director for Scheduling Correspondence (2010), Hotel Program Director (2011), Deputy Director and Deputy Social Secretary (2013).

In 2015, this around the way girl from Philly took on her role as the Special Assistant to the President and Social Secretary, further making what seems extraordinarily impossible, possible. Her effervescent personality and unmatched work ethic were ideal for this challenging position, as she oversaw a team that coordinated the monumental visit of Pope Francis, State Dinners with heads of states from China, Canada, and Italy; and booked legendary performances by stellar artists such as Beyoncé, Bruce Springsteen, and the cast of the Broadway musical Hamilton. An event she co-produced, BET’s Love & Happiness: An Obama Celebration, won a 2017 NAACP Image Award for Outstanding News/Information Special.

In addition to her expertise in event coordination, logistics, protocol, and statecraft, Deesha’s heart beats most loudly for community service. She’s worked with the Youth Health Empowerment Project, was a CARE advocacy volunteer and board member at Action AIDS, and serves as Executive Director of beGirl.world, a global empowerment and education travel program for teen girls she co-founded in 2014. A passionate advocate for women, she seeks to inspire them to believe that they are enough and can achieve their wildest dreams – just like she has.

Deesha has been featured in national media outlets including TIME, The New York Times, Marie Claire, Essence, Vogue, Refinery29, Forbes, The Root and Washington Post. A charismatic speaker with unbridled optimism, she now shares her message of hope, hard work, and living life on your own terms with audiences across the country, while running her private consulting firm.

BREAKING BARRIERS AT ANY AGE: HITTING THE RESET BUTTON ON LIFE
When Deesha dropped out of college at age 17 and went back at age 30, the last place she thought she would end up is 1600 Pennsylvania Avenue. In this talk, Deesha recounts how she pressed her reset button and used personal experience and willpower to break barriers to become a Senior Official for the first African-American President. Participants will leave energized, inspired and focused on achieving goals that will empower their workplace, home life and overall wellness.

DIVERSITY IN THE WORKPLACE: CREATING INTENTIONAL OPPORTUNITIES FOR PEOPLE OF COLOR
In this discussion, Deesha will navigate you through hiring people of color, not just as entry and mid-level staff, but also in executive positions where decisions are made and their voices are heard. You will hear about the challenges and benefits of creating opportunities for leadership, mentorship and promotion for diverse staff in any productive, collaborative space.

MANAGING THE NATION’S SOCIAL AFFAIRS: CULTURAL DIPLOMACY, PROTOCOL & ENTERTAINING
Deesha will navigate the audience through a step-by-step process of planning the perfect social affair tailored to the needs of the invited guests. In this talk, participants will also learn about the protocol of hosting foreign visitors to maintain and positively enhance relationships to benefit the company’s global reputation and revenue.