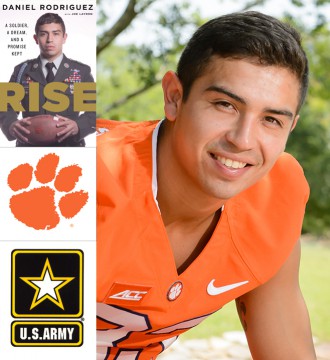 Daniel Rodriguez has quite a story, but before we introduce you to the modern day man, let’s take a trip back in time. Daniel started playing football at the age of six. Though he didn’t know it at the time, it was a passion that would eventually shape his future. With several Division II and…

Daniel Rodriguez has quite a story, but before we introduce you to the modern day man, let’s take a trip back in time. Daniel started playing football at the age of six. Though he didn’t know it at the time, it was a passion that would eventually shape his future. With several Division II and III schools recruiting Daniel by the time his junior and senior years of high school rolled around, the future looked bright.

Four days after graduation, however, Daniel’s father Ray suffered a massive heart attack and died. Ray, a military veteran, had played a pivotal role in Daniel’s life. He wasn’t just a father; he had been his son’s mentor and coach.

In the wake of losing his father, Daniel made the decision to enlist in the Army. His first tour was a 15-month deployment to Baghdad. After returning home, Daniel spent an additional year in training before leaving for a 12-month tour in northern Afghanistan. He had just celebrated his 20th birthday.

On Oct. 3, 2009, Daniel was one of 53 Americans who battled insurgents after nearly 400 Taliban attacked the American Combat Outpost Keating near the town of Kamdesh. For more than 12 hours Daniel continued to fight with shrapnel embedded in his neck and leg and bullet fragments lodged in his shoulder. Eight U.S. soldiers were killed during the skirmish, including Daniel’s close friend, Kevin Thompson. Daniel was awarded a Purple Heart and Bronze Star Medal with a “V” Device for Valor.

Upon returning home from his tours of duty overseas, Daniel often found himself feeling unfocused and displaced amidst the normalcy of stateside life. As a result, he turned to drinking to calm his anxieties and soothe his mind. The darkness that accompanied his diagnosis of post-traumatic stress disorder made Daniel’s transition from combat to classroom difficult when he enrolled at Germanna Community College just three months after returning from Afghanistan. Somehow Daniel dug deep and found a way to power through.

The following autumn, Daniel returned to school with renewed determination. Having survived the wounds of war, both physical and emotional, Daniel found himself at a crossroads. He could continue down a path of drinking and despair, or he could make the decision to turn his life around and focus on the future. In a moment of clarity, Daniel remembered a promise he made to a close friend who had died in combat. In order to get back to football, Daniel formed a plan to remain focused on academics, transfer to a different school and walk on to the team of his dreams.

Achieving the goal would not be easy, however. Along with the plan came a regimen that included a strict diet and six hours per day worth of workouts with a trainer. In addition, Daniel self-produced a recruitment video that would ultimately flood the inboxes of hundreds of college football coaches after going viral on Twitter and YouTube.

In the wake of the video, Daniel fielded interest from the likes of Virginia Tech and NC State, but when Clemson University Head Coach Dabo Swinney reached out, something in Daniel’s gut told him to pick up the phone and call. It was a conversation that would change Daniel’s life.

Swinney offered Daniel the opportunity to walk onto the team and take part in the preseason camp. After a mad rush and daunting application process that included getting waivers from the ACC and NCAA in order to make him academically eligible to play, Daniel headed off to Tiger Nation for summer classes…and the rest, as they say, is history.

At Clemson Daniel played in 37 consecutive games primarily on special teams. After graduating in December of 2014 as a two time All ACC Academic Daniel kept on pursuing football by training at EXOS in Los Angeles California.

He is now currently signed with the St Louis Rams as an undrafted free agent!

Determination, Grit, and Perseverance: The Journey from Kamdesh to Clemson
Daniel Rodriguez shares the unforgettable story of how he survived one of the bloodiest battles in Afghanistan and lived to pursue his dream of playing college football. Never asking for a handout, only a chance, he reminds audiences what it means to take control and work to succeed. With grit, determination, and the power of social media, he inspires audiences to tap into their potential and work to make their lives meaningful. An emotionally-moving storyteller, he shares how he found his way out of darkness and accomplished his unlikely dream, coming back from the edge of war in order to honor his friend’s life and create a new one for himself. This powerful keynote resonates with anyone who has ever fought for what they wanted. 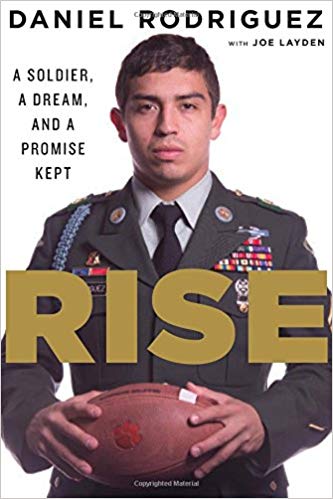 Rise: A Soldier, a Dream, and a Promise Kept

Daniel was amazing at our Safety Awards Luncheon. His story, personality, humor, and stage presence was incredible. We have received so many awesome comments about him and his speech…thanks for making this event truly awesome for us! I had the opportunity to spend some 1-on-1 time with Daniel prior to and following the luncheon and got a really good feel for the amazing man that he has become.

Daniel was outstanding! It was an excellent program. Our students really connected with him and he with them. I could not have asked for anything better.

Daniel was absolutely outstanding. Not only was his presentation incredibly inspiring and uplifting (the entire crowd was on their feet), but he is one of the brightest, most personable, and well met people that I have ever had the pleasure of meeting. We couldn’t have found a better presenter or a greater life story anywhere.

I think he was great. It was very real. He made an impression and we appreciate seeing that.

We have been receiving all glowing comments about Daniel. Our Veterans Center Director was thoroughly pleased. He worked most directly with Daniel during his visit. Daniel spoke to our veterans and guests at their recognition banquet, our radio station, and at his keynote. Everyone who came in to contact with Daniel was impressed with his passion, his commitment and determination, and his positive and thoughtful demeanor. We would be very glad and proud to recommend a visit from Daniel to any organization, school, community groups, veterans organizations, etc. Definitely positive all around. Thanks for everything you did to help make this a success for CWU and our veterans.

Daniel was the luncheon speaker on the first day of our 2016 Annual Convention. Over 800 people gathered to hear his story of coming of age through the shock of warfare, substance abuse, loss, perseverance and redemption. He is an amazing young man with a powerful, well-delivered message. As his story unfolded he established an immediate connection with the audience and something deeper with the dozens of individuals that waited after his talk to meet him, shake his hand, share a hug or exchange tear-filled whispered words. Daniel made time for them all. It was impossible to tell who got more out of the experience – Daniel or those that he took the time to speak with. Our attendees responded to him in a way that exceeded all expectations.