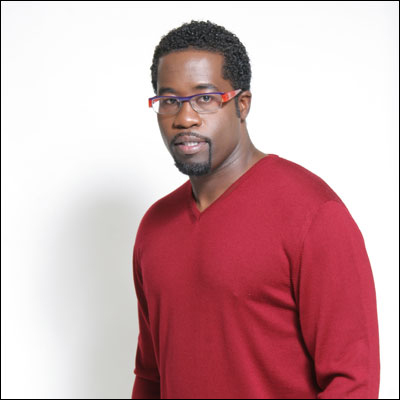 Daniel Beaty is an award-winning actor, singer, writer, and composer. Recently he had an extended off-Broadway run of his acclaimed solo play Through The Night produced by Daryl Roth. For this production Daniel received the 2010 AUDELCO Award for Outstanding Solo Performance and the 2010 Ovation Award for Best Male Lead Actor. His critically acclaimed…

Daniel Beaty is an award-winning actor, singer, writer, and composer. Recently he had an extended off-Broadway run of his acclaimed solo play Through The Night produced by Daryl Roth. For this production Daniel received the 2010 AUDELCO Award for Outstanding Solo Performance and the 2010 Ovation Award for Best Male Lead Actor.

His critically acclaimed solo play Emergence-See! ran off-Broadway to a sold-out, extended run at The Public Theater in the fall of 2006 for which he received the 2007 Obie Award for Excellence in Off-Broadway Theater for Writing & Performing and the 2007 AUDELCO Award for Solo Performance.

Daniel is also the recipient of the 2007 Scotsman Fringe First Award for the best new writer at the Edinburgh Festival and was presented with a Lamplighter Award from the Black Leadership Forum in Washington D.C. In the spring of 2008, Emergence-See!, now re-titled Emergency had a sold-out seven-week engagement at the Geffen Playhouse in Los Angeles and was awarded two 2009 NAACP Theater Awards including Best Actor.

Daniel has worked throughout the U.S., Europe, and Africa performing on programs with artists such as Ruby Dee, Ossie Davis, Jill Scott, Sonia Sanchez, MC Lyte, Mos Def, Tracy Chapman, Deepak Chopra, and Phylicia Rashad. He holds a BA with Honors in English & Music from Yale University and an MFA in Acting from the American Conservatory Theatre. His ensemble play Resurrection received its world premiere production at Arena Stage in Washington D.C. in August 2008 (where he was awarded the 2008 Edgerton Foundation’s new American Play Award); followed by engagements at Hartford Stage, the Philadelphia Theatre Company, and ETA Theater in Chicago.

Daniel’s newest solo play Mt. Joy appeared at the Riverside Theatre in May 2012. In the upcoming season, his ensemble musical Breath & Imagination – The Story of Roland Hayes premiered as a co-production with Hartford Stage and Pittsburgh City Theater. He also has a new solo play on the life of Paul Robeson – The Tallest Tree in the Forest – directed by Moises Kaufman. He is a proud member of New Dramatists and an Adjunct Professor at Columbia University.

His first children’s book based on his poem Knock Knock was released in late 2013. Daniel has also written a Spoken World Ballet Far But Close that will premiere in the Dance Theater of Harlem. In early 2014, Daniel released Transforming Pain to Power, telling his story of growing up in a household impacted by addiction and incarceration. It is full of poems, personal stories, and exercises he’s used as a teacher for over a decade.

A highly requested keynote speaker, Beaty has inspired audiences throughout the U.S., Europe, and Africa. Beaty has spoken at organizational staff retreats and led leadership training for a myriad non-profits and corporations.  Daniel’s signature keynote TRANSFORMING PAIN TO POWER explores his journey growing up with a father who was a heroine addict and dealer and a brother who was addicted to crack cocaine to discovering his purpose by watching Dr. King, graduating from Yale University, and his current career at the intersection of the arts and social justice.  This non-traditional keynote includes spoken word poetry (including KNOCK KNOCK) and character excerpts from his various plays. The speech can be crafted for a variety of age groups and events.

I Dream
In 2012, Daniel Beaty created I Dream, a nationally recognized social justice initiative that uses the tools of the arts, immersive group exercises, and trauma recovery to support young people to rewrite the story of race and class inequity in America, and create social justice projects to make that new story reality. I Dream has reached over 2000 young people in three cities across the nation, Watts, CA; Omaha, NE; and Boston, MA.