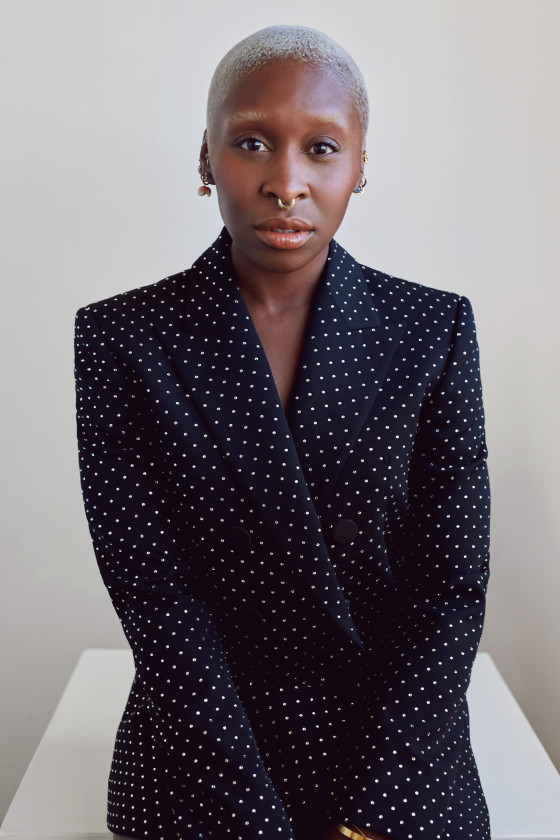 Cynthia Erivo is a multihyphenate tour deforce, captivating audiences with her award-winning music and acting, both on the stage and the screen. Erivo has an uncanny ability to shape and drive narratives across entertainment, while continuously evolving her body of work with poignant, breakthrough characters that hit emotional cores and transcend race, gender and cultural…

Cynthia Erivo is a multihyphenate tour deforce, captivating audiences with her award-winning music and acting, both on the stage and the screen. Erivo has an uncanny ability to shape and drive narratives across entertainment, while continuously evolving her body of work with poignant, breakthrough characters that hit emotional cores and transcend race, gender and cultural boundaries.

Currently, Erivo can be seen as “Holly Gibney” in the chilling HBO miniseries adaptation of Stephen King’s, The Outsider, which garnered a record 19 million viewers in the first four episodes. Next up, Erivo is set to portray Aretha Franklin in the third season of National Geographic’s Emmy® Award-winning global anthology series, Genius, with her episode titled “Genius: Aretha.”

In 2019, Erivo received two Oscar® nominations—one for her role as Harriet Tubman in the Focus Features biopic Harriet, and the other for the film’s title track “Stand Up,” which she co-wrote. Her prolific performance as the American hero abolitionist also garnered nominations from the Golden Globes®, Screen Actors Guild and NAACP Image Awards. Erivo enthralled audiences in 2016 with her revelatory and star-making turn as “Celie” in the hit Broadway revival of The Color Purple, for which she won a Tony®, Emmy® and Grammy®.

Beyond her influential and critically acclaimed performances, Erivo is a fearless voice for women and people of color, raising awareness and setting new standards for diversity across the arts. As Erivo looks ahead, she is passionate about producing the stories that people need to hear—ensuring underrepresented groups have a presence at every step in the production process.

Cynthia Erivo brings a graceful yet powerful presence to every project she takes on and her voice, perspective and style speak to audiences and the industry today more than ever.

Cynthia Erivo pushes the boundaries of a versatile and evergreen career. The classically trained award-winning artist masters every domain she enters.

An innovator, Erivo stars in John Cameron Mitchell’s musically-driven podcast anthology Anthem: Homunculus, which combines music, drama, and theater to create a dense and masterful journey in the style of a radio play, produced by Topic. Erivo also leads the voice cast and co-produced the QCode scripted thriller podcast Carrier. The podcast premiered in the summer of 2019.

Erivo will star alongside Daisy Ridley and David Oyelowo in the highly-anticipated sci-fi thriller Chaos Walking, from director Doug Liman. She will also star in John Ridley’s Needle in a Timestack alongside Orlando Bloom, Freida Pinto, and Leslie Odom Jr. She is also set to executive produce and star in Warner Brothers’ musical take on the American folk tale of Rip Van Winkle.

Erivo made her Broadway debut reprising her starring role as ‘Celie’ in the critically acclaimed revival of The Color Purple. She first played the role in 2013 at London’s Menier Chocolate Factory, earning rave reviews and an Evening Standard Theatre Award® nomination for Best Musical Performance and a WhatsOnStage Award® nomination for Best Actress in a Musical. Her performance on Broadway earned her several awards, including the Tony® Award for “Best Performance by an Actress in a Leading Role in a Musical,” a Grammy® award as a principal soloist on the original cast recording of The Color Purple (“Best Musical Theater Album”), a Daytime Emmy® Award for “Outstanding Musical Performance in a Daytime Program,” a Drama Desk Award, a Theatre World Award, and an Outer Critics Circle Award.

Erivo is also an accomplished songwriter, having written “Fly Before You Fall,” for the 2014 feature film Beyond the Lights. In March 2015, she made her solo concert debut with a show entitled Hear My Soul at Kings Place in London. In September 2016, Erivo co-starred with Joshua Henry in a one-night benefit concert performance of Jason Robert Brown’s The Last Five Years, with proceeds going to the Brady Center to Prevent Gun Violence. In February 2017, Erivo performed alongside John Legend at the 59th Annual Grammy Awards. She also performed at the Governors Ball, the official post-Oscars celebration on February 26, 2017, at the Ray Dolby Ballroom in Los Angeles.

In 2018, Erivo made her film debut in Drew Goddard’s Bad Times at the El Royale, which also stars Jeff Bridges, Chris Hemsworth, and Jon Hamm, among others. Erivo also starred in Steve McQueen’s drama, Widows, opposite Viola Davis, Michelle Rodriguez, and Elizabeth Debicki. Erivo rounded out the year with a 2019 BAFTA EE Rising Star Award nomination for her exceptional work in film and on stage.

A UK native, Erivo graduated from the famed Royal Academy of Dramatic Art (RADA) in 2010.

Are You Ready for Yes?

Find Your Power. Know Your Strength.

An Evening with Cynthia Erivo