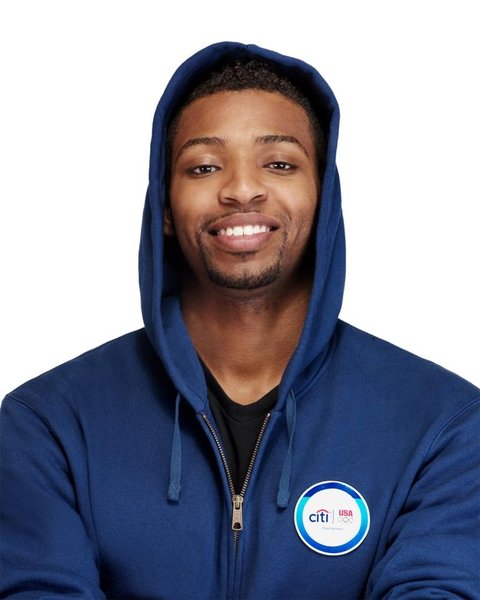 Cullen Jones proved that he is one of the fastest swimmers on the planet in 2008 when he became the second African-American in history to win an Olympic Gold medal in swimming. Cullen added to his medal count at the 2012 London Olympic Games with a Silver medal in the Men’s 4x100m Freestyle Relay, as…

Cullen Jones proved that he is one of the fastest swimmers on the planet in 2008 when he became the second African-American in history to win an Olympic Gold medal in swimming. Cullen added to his medal count at the 2012 London Olympic Games with a Silver medal in the Men’s 4x100m Freestyle Relay, as well as a Silver in the individual 50m Freestyle.

An ambassador for African-American swimmers, Jones aims to shatter stereotypes one lap at a time, eager to spread his message that black kids can swim, too. Jones accomplished just that by helping the Men’s 4×100 Freestyle Relay Team in 2008 win the Gold medal in a comeback for the ages. In a race soaked with drama and subplots, the Americans shattered the world record they had just set hours prior during prelims, blistering through the water in 3 minutes, 8.24 seconds. Jones went on to break the 50m Freestyle American record and won Gold in the Men’s 4x100m Freestyle relay at the 2009 World Championships.

Jones started making history when he became the first African-American to break a swimming World Record and to win a Gold Medal at the World University Games. Today, he continues to make history by giving back to the community through motivational speaking, youth clinics, and private lessons. Working with USA Swimming Foundation’s Make a Splash Program, Jones is dedicated to traveling coast to coast to promote the importance of minorities learning to swim.

A talented and dynamic speaker, Jones has spoken to universities, corporations and non-profits regarding his Olympic experiences and overcoming the odds.

Drown Prevention & the Importance of Learning to Swim