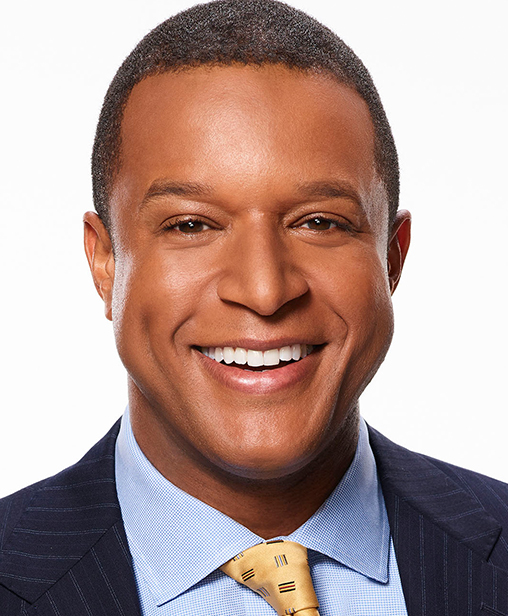 Craig Melvin is an MSNBC Anchor and NBC News Correspondent. He currently anchors “MSNBC Live” on Saturdays and Sundays, contributes reports for “TODAY,” and fills in as host for Lester Holt on “Weekend TODAY.” Prior to joining MSNBC in July 2011, Melvin was a weekend anchor for WRC, NBC’s owned-and-operated station in Washington, DC. Before…

Craig Melvin is an MSNBC Anchor and NBC News Correspondent. He currently anchors “MSNBC Live” on Saturdays and Sundays, contributes reports for “TODAY,” and fills in as host for Lester Holt on “Weekend TODAY.”

Prior to joining MSNBC in July 2011, Melvin was a weekend anchor for WRC, NBC’s owned-and-operated station in Washington, DC. Before joining WRC, Melvin earned acclaim as an evening news anchor for WIS in Columbia, South Carolina.

Melvin is widely recognized for his reporting on topical issues that matter most.  He’s covered a wide range of events, including the Republican and Democratic National Conventions, Election Night coverage for TVOne in partnership with NBC News, the Asiana Airlines 214 crash in July 2013, the George Zimmerman trial, Moore, Oklahoma’s deadly tornado, the Sandy Hook school shooting, and a series on the future of Historically Black Colleges and Universities (HBCUs).  Melvin received two Emmy Awards for his reporting at WIS and was also named “Best Anchor” by the South Carolina Broadcaster’s Association.

Melvin’s journalism career began during high school, when he served as an “Our Generation” reporter for WIS. In that role, Melvin became one of the youngest recipients of an Associated Press award for a report on innovative teaching.

Melvin received a Bachelor of Arts in Government from Wofford College in Spartanburg, South Carolina, his home state. In his spare time, Melvin enjoys running, cooking and spending time with his family.

A Conversation With Craig Melvin