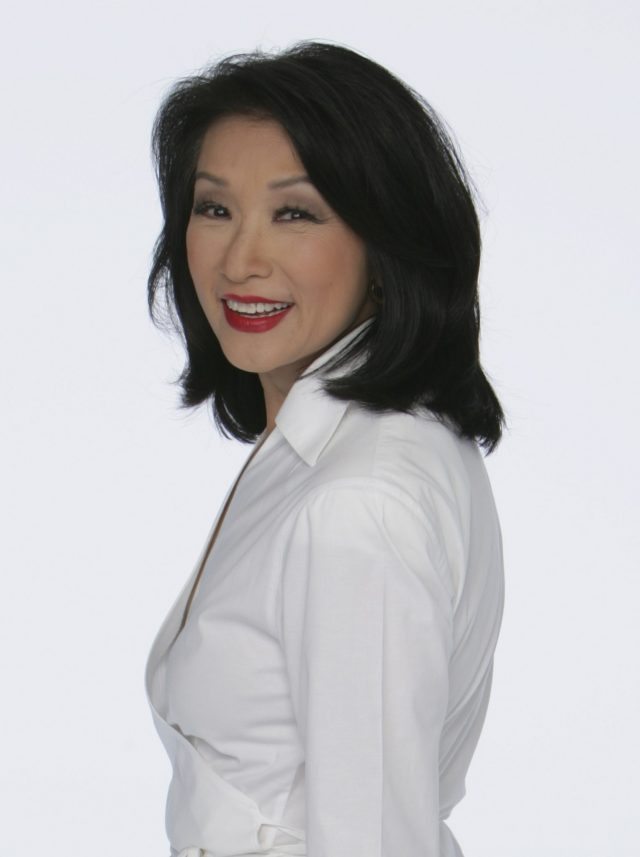 Three-time Emmy Award-winner Connie Chung started her television journalism career in 1969 at a local station in her hometown, Washington, D.C. She worked for all the major networks, starting in 1971 with CBS News, covering politics and world news for the CBS Evening News with Walter Cronkite. She reported on presidential campaigns, the SALT I…

Three-time Emmy Award-winner Connie Chung started her television journalism career in 1969 at a local station in her hometown, Washington, D.C.

She worked for all the major networks, starting in 1971 with CBS News, covering politics and world news for the CBS Evening News with Walter Cronkite. She reported on presidential campaigns, the SALT I talks between Nixon and Brezhnev, and Watergate.  Later, in 1993, she was the first woman to co-anchor the network’s national flagship news broadcast, the CBS Evening News.

She has covered conventions and elections since 1972, anchored several prime-time network magazine programs and conducted a series of exclusive interviews: PRC leader Li Peng on the five-year anniversary of Tiananmen Square; the first and only interview with Joseph Hazelwood, captain of the Exxon Valdez; the first interview with Los Angeles Lakers star Magic Johnson after he announced he was HIV positive; and Congressman Gary Condit (D-CA) concerning the disappearance of his intern Chandra Levy.

Ms. Chung has received numerous awards, including the George Foster Peabody Award, 3 Emmy awards, the Amnesty International Human Rights Award and several awards for an investigative hour on a 1966 civil-rights case. The report resulted in the indictment, trial and conviction of a murderer more than three decades later.

In 1997, she was a Harvard fellow at the Joan Shorenstein Center on the Press, Politics and Public Policy at the John F. Kennedy School of Government at Harvard University.  She serves on the Board of Trustees of the University of Maryland, Journalism Board of Visitors of the Philip Merrill College at University of Maryland, the Advisory Board of the CUNY Graduate School of Journalism and the Flathead Beacon Foundation in Montana.

She and her husband, Maury Povich, live with their son, Matthew, in Manhattan.

Washington and the Media

The Microphone as Sword: Journalism, the Search for Truth and the Fight Against Injustice

The Education of Connie Chung

Juggling Act: My Life as a Working Mom