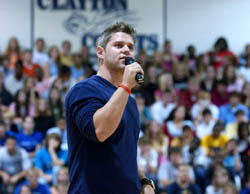 One of the bright new stars of MTV's top rated Road Rules: S

Chris Graebe is one of the bright stars of MTV’s top rated extreme sports reality programs, Road Rules: South Pacific & Battle of the Sexes 2. Chris will also be finished filming & hosting a new reality series entitled “Reality Trip” With the platform of MTV and his unique stance of being a positive role…

With the platform of MTV and his unique stance of being a positive role model on shows that typically depict everything but a positive example, Chris is clearly a light in a very dark place.

Being blessed as a cast member on these highly popular shows, Chris has had the opportunity to become a highly established and national recognized public speaker. His purpose is to inspire today’s youth with positive messages of sexual abstinence, drug & alcohol awareness and his love of Jesus Christ. Chris has spoken at many events from high school assemblies at our nation’s capitol to college rallies, youth conventions and at numerous churches across the United States.

Chris brought an element of reason and stability to Road Rules and Battle of the Sexes 2 and was often the peace keeper and arbitrator among the cast. This unique ability, coupled with his unfailing sense of humor, enables him to ingratiate himself to his audience quickly.

Chris’s passion is to strengthen youth by encouraging them to grasp and believe the idea that they do not have to partake in drugs and alcohol to fit in or be cool. Ask anyone who has witnessed one of his speaking appearances and they will attest that his pop culture celebrity keeps the youthful crowds tuned in to his every word.

An Evening With Chris Graebe