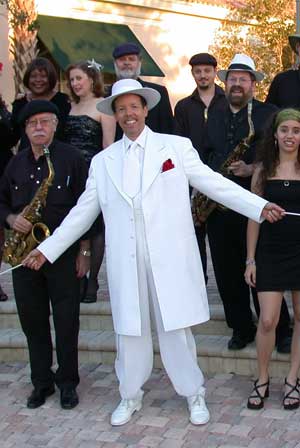 The Calloway family has been dazzling audience since the roaring 1920s.  Jazz legend the late Cab Calloway started the family tradition and led one of the best African-American big bands during that era.  Now, his grandson, Calloway Brooks, has picked up the baton to deliver the authentic sound of a jazz orchestra coupled with a…

The Calloway family has been dazzling audience since the roaring 1920s.  Jazz legend the late Cab Calloway started the family tradition and led one of the best African-American big bands during that era.  Now, his grandson, Calloway Brooks, has picked up the baton to deliver the authentic sound of a jazz orchestra coupled with a snazzy stage style.

Brooks is a graduate of the prestigious New England Conservatory of Music and credits his years with Calloway as the bedrock of his musical enlightenment.    In the past, he has performed with the Duke Ellington Orchestra and the Lionel Hampton Orchestra and with countless other famous jazz musicians.  Brooks has played at such venues The Kennedy Center for Performing Arts, Lincoln Center and the Rome Opera House.

An Evening With Cab Calloway Orchestra