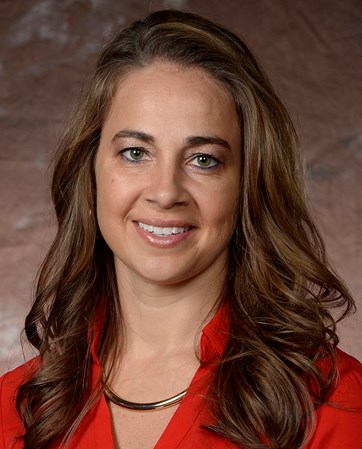 After an outstanding college and professional basketball career, including two Olympic appearances, Becky made history in 2014 when she became the first woman to coach full-time in the NBA when the San Antonio Spurs brought her into a leadership role as assistant coach. She made history again as the the first woman head coach to…

A seven-time WNBA All-Star, Hammon retired from the San Antonio Stars at age 37 and made an historic leap across town to the Spurs, becoming the first paid, full-time female assistant coach in NBA history.

The major colleges, however, thought she was too small, too slow and too South Dakota. Colorado State took a chance, and the 5-foot-6 point guard broke all of the Rams records too, earning All-American recognition, winning the Frances Pomeroy Naismith Award as the best senior player under 5-foot-8, and passing 11-year NBA veteran Keith Van Horn as the leading scorer—male or female—in Western Athletic Conference history.

In spite of all that, Hammon was not selected in the four-round 1999 WNBA draft. She signed with the New York Liberty, however, launching a 16-year career that earned her props as one of the top 15 players in WNBA history.

In 2008, Hammon made a hard decision and joined Russia’s national team and captured an Olympic bronze medal in the 2008 Olympics. She played again for Russia in 2012, and on the plane ride back from London struck up a conversation with the man next to her: Spurs head coach Gregg Popovich.

In 2013, Hammon played just one WNBA game and tore her ACL. While injured, she unofficially interned with the Spurs, sitting behind the bench during home games, watching practices and attending film sessions.

One thing that hasn’t changed for Hammon is her South Dakota roots. Ron Riherd, Becky’s high school coach, went to see her play in the WNBA multiple times and remembers Hammon being endlessly accommodating to fans and admirers after games.

“I certainly never forget where I come from,” Hammon said. “There’s not a professional team in South Dakota anywhere, so I think the fact that they get a chance to interact with these professional athletes in unique situations, to be able to impact those young lives, hopefully that’s something they never forget. Hopefully I gave them a piece of knowledge or encouragement or something that will help them later on in life.”

That hospitality has still been present in Hammon’s career as an assistant coach. When Riherd got the boys head coaching job at Stevens High School two years ago, he called Hammon and asked her if he could come to San Antonio and watch a Spurs practice. When Riherd was down at a practice, Spurs head coach Greg Popovich came over to introduce himself and exchange some banter, which led to the subject of Hammon.

She made history as the the first woman head coach to lead an NBA team in a regular season game when head coach Gregg Popovich was ejected in the second quarter of a Spurs game.

An Evening With Becky Hammon