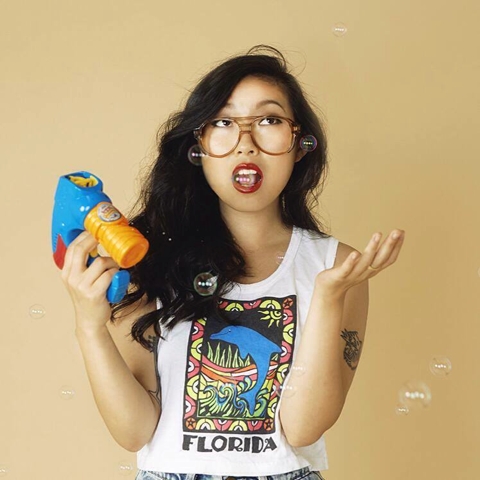 Awkwafina is an award-winning Asian-American writer, actress and rapper. Her “government name” is Nora Lum. Most recently, Lum earned rave reviews for her performance in Lulu Wang’s The Farewell. Before that, she was seen in Warner Brothers features Ocean’s 8, directed by Gary Ross, opposite Sandra Bullock and Cate Blanchett and Crazy Rich Asians, directed…

Awkwafina is an award-winning Asian-American writer, actress and rapper. Her “government name” is Nora Lum. Most recently, Lum earned rave reviews for her performance in Lulu Wang’s The Farewell. Before that, she was seen in Warner Brothers features Ocean’s 8, directed by Gary Ross, opposite Sandra Bullock and Cate Blanchett and Crazy Rich Asians, directed by Jon Chu, opposite Constance Wu and Michelle Yeoh. Lum can be seen in the Universal film Neighbors 2 opposite Seth Rogen, Zac Efron, and Rose Byrne. She also starred as Rebecca in the independent comedy Dude, written and directed by Olivia Milch. She was the voice of Quail in the Warner Bros. animated feature Storks (2016). In television, Comedy Central ordered ten episodes of Awkwafina is Nora from Queens, a series which Lum created and stars in. Her other TV credits include: Hulu’s Future Man as well as MTV’s Mary + Jane and Girl Code. She is self-noted for her extensive satire and comical appeal in her music. Lum sold her first book, a travel guide to New York entitled Awkwafina’s NYC published by Penguin Random House. She hosts a talk show on YouTube for Astronauts Wanted entitled TAWK. Lum is a cast member on MTV’s show Girl Code and Girl Code Live. On October 2, 2018, Lum hosted Saturday Night Live. She has been featured in The New York Times, Cosmopolitan, New York, The Daily Beast, Gothamist, Jezebel, Gawker, Hairpin, HelloGiggles.com, and Bust.

NORA LUM, BETTER KNOWN AS “AWKWAFINA,” IS AN ASIAN-AMERICAN RAPPER, WRITER AND ACTRESS FROM QUEENS, NEW YORK. IN 2018, SHE CO-STARRED IN THE ALL FEMALE CAST OF THE WARNER BROS. FEATURE, OCEAN’S 8, AND THE #1 BOX OFFICE MOVIE, CRAZY RICH ASIANS. SHE ALSO HOSTED ‘SNL’ MAKING HER THE FIRST ASIAN WOMAN TO DO SO IN 18 YEARS. LOOK FOR HER IN THE UPCOMING ‘JUMANJI’ SEQUEL, SET TO RELEASE THIS DECEMBER.

SHE IS CURRENTLY WORKING ON RELEASING NEW MUSIC IN 2019.

An Evening With Awkwafina
Awkwafina shares her life experiences and lyrical inspiration, and for a live performance followed by an exclusive meet-and-greet. Her lecture involves how to make it as a artist, women in entertainment, being a minority/Asian in entertainment