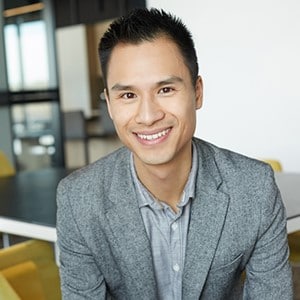 Andrew Chau successfully co-founded SkipTheDishes in 2012, which from its early beginnings in Saskatoon grew to over 130 markets and a network of over 4 million Canadians and 25,000 restaurant partners. Andrew, along with the founding team, led Skip to one of Western Canada’s largest exits in 2016 to Just Eat, a publicly traded company…

Andrew Chau successfully co-founded SkipTheDishes in 2012, which from its early beginnings in Saskatoon grew to over 130 markets and a network of over 4 million Canadians and 25,000 restaurant partners. Andrew, along with the founding team, led Skip to one of Western Canada’s largest exits in 2016 to Just Eat, a publicly traded company based in the UK.

Chris remained CEO of SkipTheDishes as they continued to expand to over 2,500 employees and a valuation of over $2BN dollars, before founding Prairie venture builder, Harvest Builders. Headquartered in Calgary, Harvest Builders is developing the infrastructure across the Prairie regions for startups to access talent, funds and expertise needed to de-risk and successfully scale new ventures in their local markets.

Following Skip, Andrew founded the Calgary based fintech venture, Neo Financial, Canada’s first integrated rewards and consumer banking solution, that is designed specifically to support local businesses while providing Canadians a better way to grow and manage their money. Founded in 2018, Neo Financial has expanded to over 130 employees and has begun rolling out across Western Canada.

Conversation with Andrew Chau
Entrepreneurs in the food industry, the challenges they faced, and their thoughts on how the AAPI community and allies can support local restaurants and businesses.