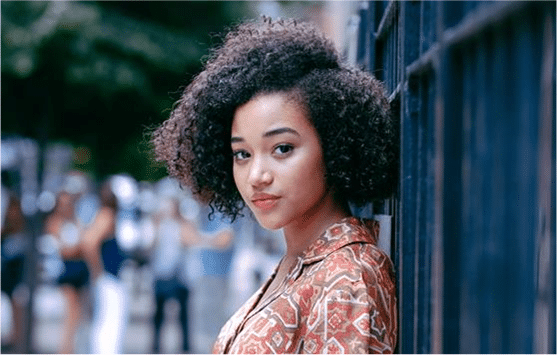 Named for the Zulu word for power, Amandla Stenberg has made a name for herself as an actress and as activist. Her activism was launched when her video history project “Don’t Cash Crop My Cornrows” went viral with nearly 2 million views. Since then Amandla has been credited with bringing the cultural appropriation conversation to…

In April 2011, Amandla landed the coveted role of Rue in the screen adaptation of Suzanne Collins’ The Hunger Games. For her heart-breaking performance, Amandla earned an NAACP Image Award nomination for Outstanding Supporting Actress in a Motion Picture and a Black Reel nomination for Best Breakthrough Performance. She also won (with Jennifer Lawrence) a Teen Choice Award for Choice Movie Chemistry and a Black Reel Award.

​Amandla began her feature film career with the 2010 film, Colombiana. In 2018 she can be seen as the lead in the upcoming, highly anticipated Fox 2000 film adaptation of Angela Thomas’ debut novel, The Hate U Give; the Amma Asante World War II vehicle, Where Hands Touch and the sci-fi thriller The Darkest Minds. Recently the actress appeared in the YA adaptation Everything, Everything (2017). Amandla also appears in the visual album “Beyoncé: Lemonade” (2016).

Amandla began her career when she was four years old. She shot numerous commercials, most notably for BuildTheDream.org, a moving Boeing-sponsored PSA, which raised funds for a national memorial in Washington, D.C., honoring Martin Luther King, Jr. It premiered during the weekend of President Obama’s inauguration. Amandla was invited by the MLK Memorial Foundation, along with such luminaries as Jesse Jackson, Tommy Hilfiger, Dan Rather, Stevie Wonder and Nikki Giovanni, to participate in the memorial’s dedication ceremony. After an introduction by actress Cicely Tyson, Amandla paid tribute to the four little girls who were killed in the Birmingham church bombing.

Her television credits include a guest-starring role on the first season of Fox’s Sleepy Hollow and as a series regular on NBCUniversal’s Mr. Robinson. In January 2016 she traveled to Park City, Utah, to attend the premiere of her film, As You Are, which won a Special Jury at the Sundance Film Festival. In addition to on-camera jobs, Amandla has put her sensitive ear to work in ADR gigs for both film and television. Amandla lent her voice to Rio 2 (2014) playing a high-flying, feathery spawn of Anne Hathaway and Jesse Eisenberg.

When she’s not making music, Amandla is making noise on social media. Declared “one of the most incendiary voices of her generation” by Dazed magazine, which featured Amandla on the cover of its Autumn 2015 issue, the social activist helped catapult the topic of cultural appropriation into public discourse when she posted her school project video, “Don’t Cash Crop My Cornrows” on her Tumblr. Time Magazine named her one of The 30 Most Influential Teens of 2015 and 2016. Amandla appeared on the cover of Teen Vogue’s February 2016 issue, for which she was interviewed by Solange Knowles. ELLE UK dubbed her an “icon of change” on its September 2016 cover while Interview called her “a new progressive” on its cover. Amandla interviewed (and danced with!) Gloria Steinem for Teen Vogue’s September 2016 issue. She landed the cover of Dazed a second time with its Spring 2017 issue.

Oprah Winfrey has taken note of Amandla’s activism and invited her to give a talk (“My Authenticity Is My Activism”) for SuperSoul Sessions Series 2 at UCLA’s Royce Hall in April 2016. Blacks Girls Rock! honored Amandla with the Young, Gifted and Black award. She is also the winner of the BET Awards’ YoungStars award. The Ms. Foundation named Amandla (along with Roward Blanchard) “Feminist Celebrity of the Year ” for 2016. Highlights were featured on the OWN Network’s SuperSoul Sunday.

Amandla is co-author, with Stranger Comics’ Sebastian Jones, of the comic book series Niobe: She is Life. She is a youth ambassador for No Kid Hungry, and supports the Ubuntu Education Fund, which nurtures children “from cradle to career” in Port Elizabeth, South Africa.

My Authenticity is My Activisim

You Are Here: Amandla Stenberg on Self-Care 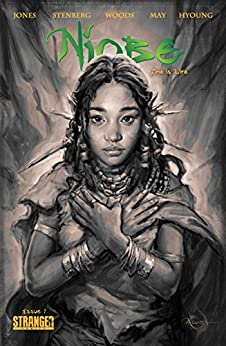 Niobe: She Is Life