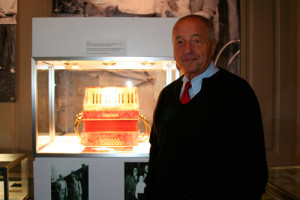 Alex Rosner, a child survivor of the Holocaust whose family was rescued by Oskar Schindler. Born in Warsaw, Poland, in 1935, Rosner spent the years between 1940 and 1945 in various German concentration camps, where his father’s musical talents were chiefly responsible for their survival. He and his parents immigrated to the United States in…

Alex Rosner, a child survivor of the Holocaust whose family was rescued by Oskar Schindler. Born in Warsaw, Poland, in 1935, Rosner spent the years between 1940 and 1945 in various German concentration camps, where his father’s musical talents were chiefly responsible for their survival. He and his parents immigrated to the United States in 1946.

Unable to read or write in any language, he began his formal education at age 11, graduated from Brooklyn Technical High School in 1953 and from Rensselaer Polytechnic Institute with a degree in electrical engineering in 1957, as well as an ensign’s commission in the U.S. Naval Reserve.

He served on active duty aboard the USS Shasta for two years and worked in the defense industry for eight years. In 1967, he founded Rosner Custom Sound Inc., which he still heads.

Steven Spielberg invited Rosner, his parents and other family members to appear in the epilogue scenes of “Schindler’s List” filmed in Jerusalem. The Rosners, along with the actors who portray them in the film, place stones on Oskar Schindler’s grave and are identified by name. Rosner’s late father’s violin is on permanent display at the Holocaust Museum in Washington, D.C.

“By listening to those who lived as well as remembering those who perished, we absolutely deny victory to those who tried to exterminate us,” said Rabbi Serena Fujita, Jewish Chaplain at Bucknell. “It is in this context that we have invited Alex Rosner, to share the story of his childhood.”

Testimony of a Survivor

A Conversation With Alex Rosner

Mr. Rosner’s moving presentation to our students at Bucknell University made such an important difference in their understanding of the human dimension of the Holocaust. Mr. Rosner’s shared his and his family’s pain, but he also helped students understand their responsibility to always do the right thing–a message that resonated strongly with them. I am so grateful to Mr. Roser for his willingness to share his experiences for making it possible for my students and others to learn first hand about this terrible period in history.