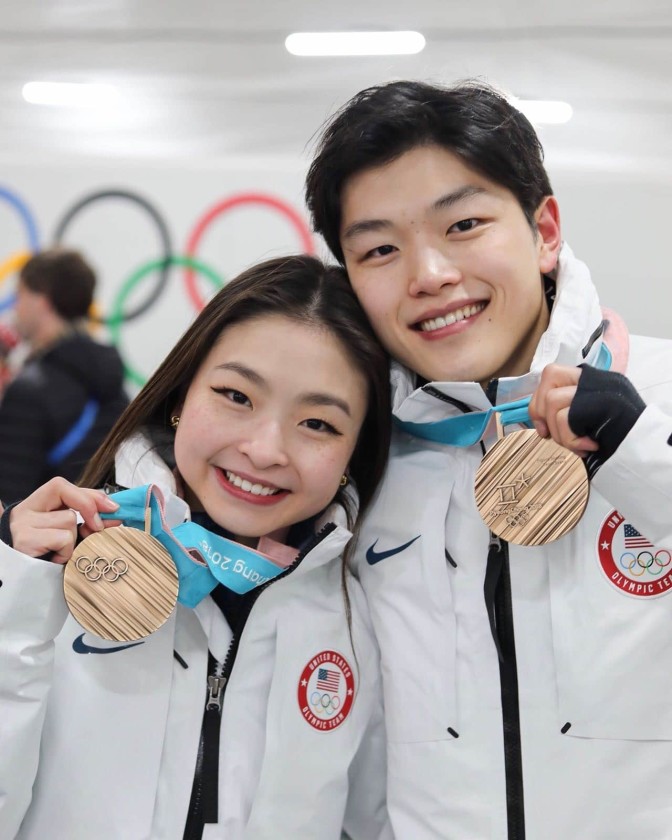 Although Maia and Alex Shibutani made Olympic history at the 2018 Winter Games, their story begins long before then. The sister and brother, affectionately known as the “ShibSibs”, share memories of working together as a team that dates back to their early childhood. While their familial ties and trust formed the basis for their teamwork,…

Ice dancers Maia and Alex Shibutani are two-time Olympic Bronze Medalists, three-time World Medalists, Four Continents Champions, and two-time U.S. National Champions. They have medaled at the U.S. Championships for 14 consecutive years – standing on the podium at every competitive level every year that they have competed. They have also won six titles on the Grand Prix series and are two-time Grand Prix Final medalists. They are two-time members of the U.S. Olympic teams, competing at the 2014 Winter Olympics in Sochi, Russia, and the 2018 Winter Olympics in Pyeongchang, South Korea. Maia was 4 and Alex was 7 when they had their first recreational group skating lesson. Although Maia was immediately entranced and asked for private lessons, Alex decided to continue skating only after he saw how much fun Maia was having. Once they began ice dancing together at the ages of 9 and 12, the two swiftly climbed through the ranks becoming U.S. Champions at the Intermediate (2006), Novice (2007) and Junior (2010) levels. In order to pursue their training at an elite center, the Shibutanis, along with their mother, moved to Colorado Springs in 2005 while their father remained in New York taking the red-eye back and forth for the weekends. Once again in 2007, Maia and Alex, along with their mother, moved to Ann Arbor, MI in order to continue their training with Marina Zoueva. As difficult as the separations were for the family, it paid off. At their first senior World Figure Skating Championships in 2011, Maia and Alex finished on the podium, earning a bronze medal, an unprecedented achievement for a team making their international debut at the senior level. Despite their initial success at the senior level and their continued strong placements at international competitions, the duo did not land on the podium again at the World Championships for the next five years. Restricted by the sport’s traditional choreographic themes centered around romance and classical music, the duo began to forge their own unique path to success. This involved choosing contemporary music, as well as conceptualizing, developing, and producing the music for their programs. Office, the Shibutanis worked with dancers from hip-hop, ballroom, and modern dance to develop their own style of movement and choreography. Rather than becoming characters from traditionally romantic stories, the Shibutanis took the bold risk of choosing to tell their own personal story through their programs. Their genuine respect and appreciation for each other, combined with their shared trust in their process, helped them to realize even greater success when they won their first U.S. National title at the senior level in 2016 followed by a World silver medal that same year. At their first Olympics in 2014 in Sochi, the ShibSibs were the second youngest team in the ice dance field and placed ninth in the overall competition. In 2018, they became the first ice dancers Asian descent to medal at the Olympics and are only the second sibling duo in the history of the sport to share an Ice Dancing Medal. Off the ice, Maia and Alex have been active as ambassadors and supporters of various organizations. As Athlete Ambassadors for the U.S. State Department, they have traveled to Japan, Korea, and Singapore, connecting with young people at cultural and goodwill events. They have twice been guests of U.S. Secretaries of State, Hillary Clinton and John Kerry, at U.S. State Department functions honoring visits by the Prime Minister of Japan. They were members of the Athletes’ Advisory Commission for the successful LA 2028 Summer Olympics bid organization. Alex and Maia are also Athlete Ambassadors for Right to Play and Figure Skating in Harlem and lend their support to various causes including The Jimmy Fund, and charity: water.

The Shibutanis have received a range of honors and awards. In 2016, they won the U.S. Figure Skating Readers’ Choice Skater of the Year Award (Michelle Kwan Trophy). In 2018, the Shibutanis were finalists for the AAU James E. Sullivan Award, given to the nation’s best amateur athletes. Maia is a two-time recipient of the Women’s Sports Foundation’s Travel and Training Grant and was a finalist for 2018 Team Sportswoman of the Year. Maia and Alex have been named several times, by the combined nomination of sports journalists and the support of fan votes, as Team USA Athletes of the Month. Most recently in 2019, they were named to the prestigious A100 List, which honors the most impactful Asians and Asian America & Pacific Islanders across a wide range of professions. When not on the ice, Maia and Alex can be found on social media. Their ShibSibs YouTube channel, launched in July 2012, has over 100 original content videos which have garnered over 11 million views and has over 168,000 subscribers. They were finalists for the 2019 Shorty Awards, celebrating the Best in Sports in Social Media. The Shibutanis are known for using their platform on social media to bring new audiences to their sport, as well as sharing their interests in fashion, food, travel, and entertainment. The Shibutanis’ ability to connect with people around the world has built them a passionate and loyal community of fans and supporters.

An Evening with Alex and Maia Shibutani