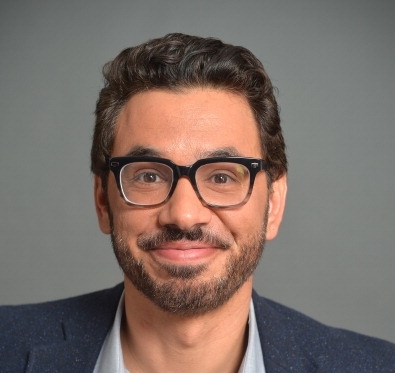 Comedian and Correspondent on "The Daily Show". Madrigal is a series regular in the Showtime dark comedy I'm Dying Up Here

A correspondent on The Daily Show since 2011, Al Madrigal has been named Best Stand-Up Comedian by the HBO/U.S. Comedy Arts Festival and his material dubbed “dynamic” by The New York Times. His unique, spontaneous and fast-paced lyrical storytelling style has made him a regular on television with numerous appearances on Comedy Central including his…

A correspondent on The Daily Show since 2011, Al Madrigal has been named Best Stand-Up Comedian by the HBO/U.S. Comedy Arts Festival and his material dubbed “dynamic” by The New York Times.

His unique, spontaneous and fast-paced lyrical storytelling style has made him a regular on television with numerous appearances on Comedy Central including his own half-hour Comedy Central Presents Special and appearances on John Oliver’s New York Stand-up Show and Pretend Time with Nick Swardson. Al has also appeared with Conan O’Brien (as one of the first 20 guests during his stint as host of The Tonight Show, and on Conan on TBS) as well as multiple appearances on Lopez Tonight, The Late Late Show with Craig Ferguson and Jimmy Kimmel Live.

Al also has his share of acting credits. He has appeared on CBS’s Welcome to the Captain with Jeffrey Tambor and Gary, Unmarried with Jay Mohr. Cheech Marin (Cheech and Chong) played his father on a sitcom, The Ortegas, that was set to debut on Fox in 2003 in the time slot after The Simpsons before it was shelved at the last minute. He was most recently seen on the NBC sitcom About A Boy, alongside David Walton and Minnie Driver.

This Is Not Happening - Al Madrigal - Becoming a Latino Comic