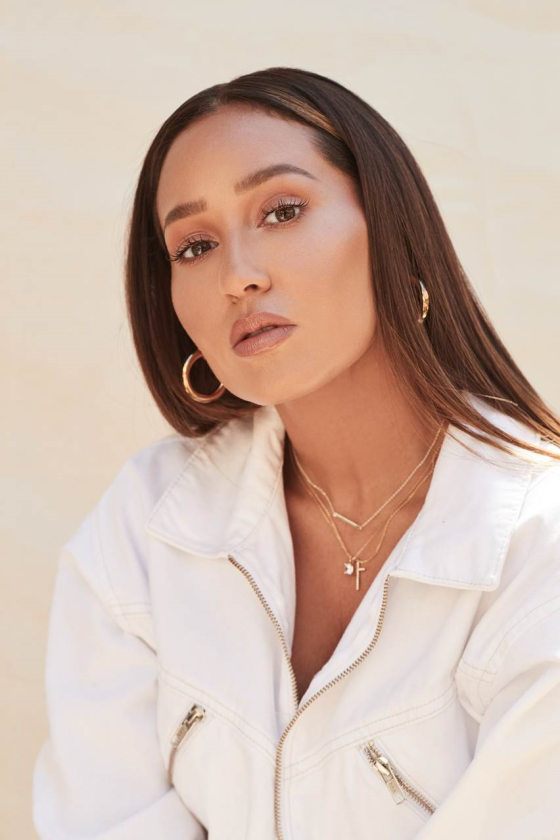 Adrienne Bailon Houghton co-hosts the The Real, a one-hour, daily talk show on Fox Television Stations which premiered in 2013 and made Houghton the first Latina daytime talk show host on English language television. Throughout its five seasons, Houghton has offered the show’s engaged audience fresh points of view, youthful energy and passion. Along with her bold, diverse and outspoken co-hosts, Houghton won a 2018 Daytime Emmy® Award as “Outstanding Entertainment Talk Show Host” and a 2018 NAACP Image Award for “Outstanding Talk Series”.

Houghton launched her weekly YouTube series “All Things Adrienne” in April 2018, serving as executive producer and fearlessly bringing viewers into her daily life through real conversations centered around her core values and relatable, everyday topics — from fashion and beauty to cooking and home decor to family and faith. Since its launch, the channel has grown to 850K subscribers and has generated more than 50 million total views. Building on her success in the digital space, Adrienne launched Wear It Well on Facebook Watch in October 2019 — the series challenges Adrienne to style and dress a group of friends with diverse body types with the goal of empower women of all shapes and sizes to embrace their bodies and find confidence in fashion.

In November 2018, Houghton released XIXI, an affordable luxury jewelry brand inspired by signature pieces from her personal jewelry collection that have been passed down through generations of her family. Rooted in heritage and faith, XIXI has launched and sold-out seven collections. The company maintains steady growth, averaging 120% in revenue increase month over month since its launch.

Born in the heart of New York City’s Lower East Side, Houghton was a household name by the time she was just 14 years old. She first stepped into the spotlight in 1999, when she rose to fame as the lead singer of multi-platinum R&B girl group, 3LW. The group released a total of three studio albums, and toured globally with Destiny’s Child and NSYNC. In 2003, Houghton became a founding member of the pop-group The Cheetah Girls and released the Disney Channel movie of the same name, which drew 84 million viewers worldwide. With the colossal success of their first film and multiple lucrative merchandising deals, the group would go on to release two sequel films, The Cheetah Girls 2 and The Cheetah Girls: One World. In 2009, Houghton served as the face of the MTV network and hosted the afternoon block of their programming, in addition to hosting specials and celebrity interviews.

As an actress, Houghton’s credits include roles in several television hits, including the Disney Channel series’ That’s So Raven (2003) and Buffalo Dreams (2005), the MTV television movie All You’ve Got (2006), the feature film Coach Carter (2005), the ABC Family television movie Lovestruck (2013) and the independent motion picture I’m in Love with a Church Girl (2013), among others.

In addition to hosting the red carpet at the 2013 BET Awards, Houghton was frequently featured as a BET co-host on the popular countdown show 106 and Park, as well as on VH1’s Morning Buzz. In 2012, Houghton debuted her Style Network show, Empire Girls, with model and television personality Julissa Bermudez. Houghton also hosted the Oxygen network series Nail’d It!, a reality show that focuses on nail- art competition and also launched her own “Fingertip Fetish” nail polish line.

As a Latina woman with multiple platforms, Houghton has always focused on giving back and has strived to empower and inspire through her work. She founded the nonprofit foundation Besos Care Packages to provide people in need with basic living essentials and specialty items. Through the foundation, Houghton has partnered with non-profit organizations including the Salvation Army and Minnies Food Pantry to expand its reach and diversify the way in which they support the community. She continues to be an advocate for girls, and an active volunteer for a number of major causes and charities, including the Girls Scouts of America, the Boys & Girls Clubs of America, Make-A-Wish, Arthur Ashe Kids’ Day and City of Hope.

Coquito but make it QUICK