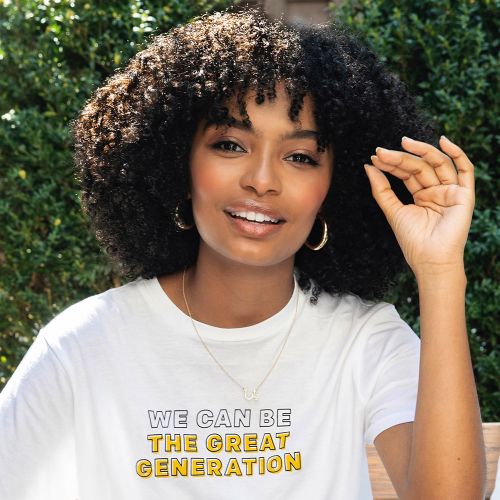 Yara Shahidi is an award-winning actress, producer, change agent and breakout star of ABC’s Emmy-and Golden Globe-nominated series black-ish. Shahidi is now the executive producer and lead of its Freeform spinoff series, grown-ish, where she plays Zoey Johnson, an ambitious, fashion-forward college student, on her journey of figuring out adulthood. When the series first premiered in 2018, it became the cable net’s best comedy series launch in 5 1/2 years, drawing 4.5 million viewers in its first three days. As Shahidi focuses on utilizing her platform to empower and inspire others, she continues to be one of Hollywood’s most heralded talents.

Shahidi’s film career spans from childhood favorites such as, Imagine That (2009), opposite Eddie Murphy, to the timely socio-political romance, Sun is Also a Star (2019), centering around immigration and inclusion. Other film credits include Unthinkable (2010), Salt (2010), Butter (2011), and Alex Cross (2012). Shahidi has recently been tapped for the iconic role of Tinkerbell for the 2022 Disney live-action reimagination of Peter Pan & Wendy. In 2019, Shahidi expanded her relationship with ABC by signing a multi-year producing deal with her business partner and mother, Keri Shahidi, under the moniker: 7th Sun Productions.

Off-screen, Yara is a full-time student at Harvard University where she is earning a B.A. in Social Studies and African American studies. She is a champion for inclusive media programming, and an advocate for equity. Shahidi is a sought-after public speaker, in conversation with university peers and thought leaders such as: Dr. Angela Davis, President Obama, Harry Belafonte Jr., former Secretary of State Hillary Clinton, Dr. Cornell West, Senator Cory Booker, and Senator Rev. Raphael Warnock. Inspired by her extensive work with President and First Lady Obama, Shahidi founded Eighteen x 18 in 2016, now called WeVoteNext, to shine a light on Gen Z and BIPOC inclusion in the political process.

Labeled as one of the stand-out voices of her generation and identified as a leader of the New Hollywood guard, Shahidi has received numerous accolades for her work outside of entertainment, such as TIME Magazine’s 30 Most Influential Teens, Forbes 30 Under 30, British Vogue Forces for Change, Glamour Magazine’s Women of the Year and Essence Magazine’s Black Women in Hollywood to name a few.