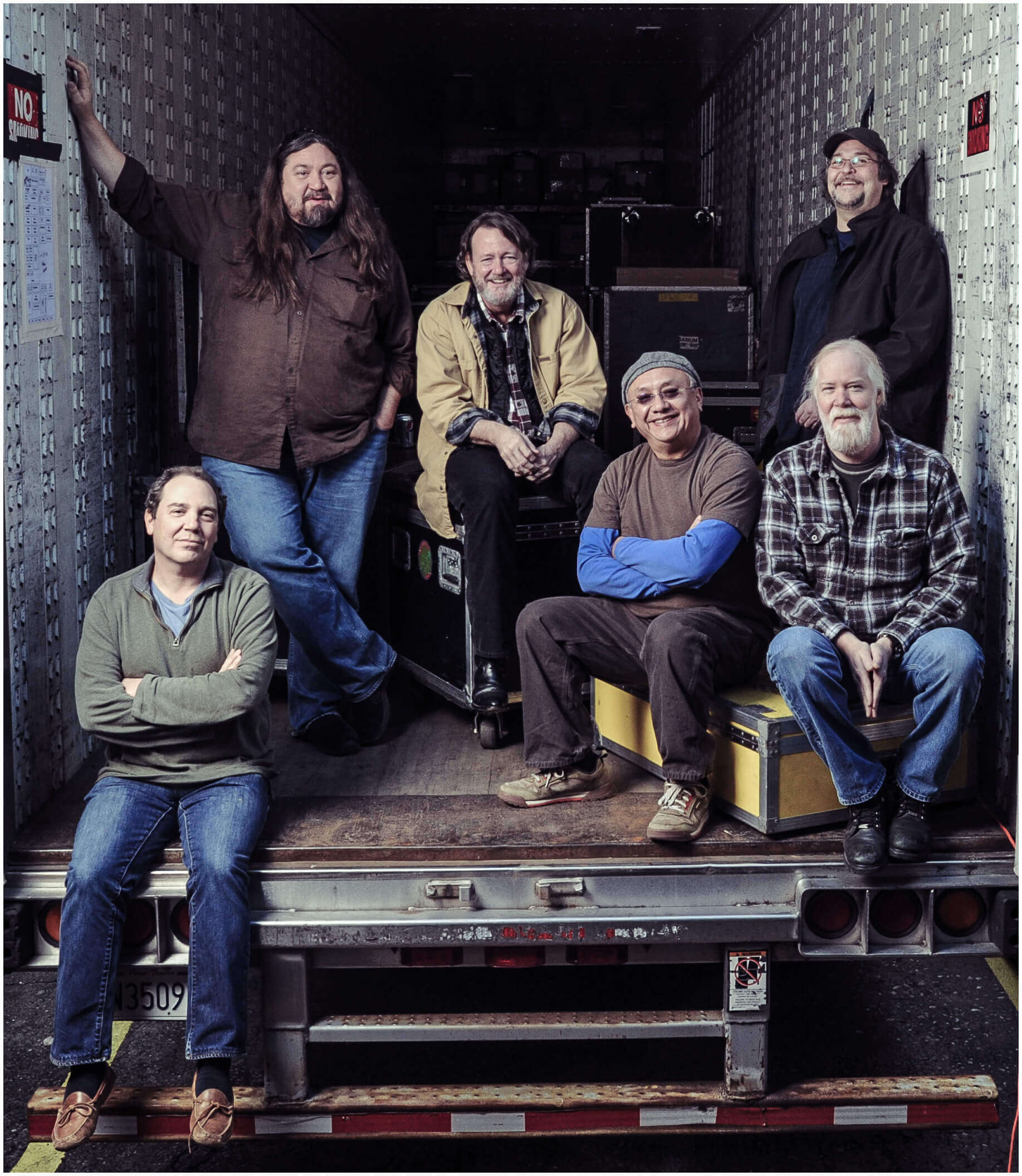 Widespread Panic has been together going on 30 years. Formed by original members vocalist/guitarist John “JB” Bell, bassist Dave Schools and late guitarist Michael Houser, who lived together in a suburban house in Athens, GA, where they met as students not far from the University of Georgia campus, later to be joined by drummer Todd…

Widespread Panic has been together going on 30 years. Formed by original members vocalist/guitarist John “JB” Bell, bassist Dave Schools and late guitarist Michael Houser, who lived together in a suburban house in Athens, GA, where they met as students not far from the University of Georgia campus, later to be joined by drummer Todd Nance. Shortly after that, the band’s line-up was solidified with the addition of percussionist Domingo “Sunny” Ortiz and keyboard player John “JoJo” Hermann.

Formed in the tradition of the great southern guitar blues bands, with an improvisatory ethos, Widespread Panic continue to explore a sound all its own on the band’s 12th album, Street Dogs, their first studio effort since 2010’s Dirty Side Down. When asked to describe Street Dogs, Widespread Panic’s debut album on Vanguard Records, JB references the way Dr. John describes the music scene in New Orleans as “a gumbo of musical influences.” JB cites Van Morrison and George Carlin as influences while Dave (Grateful Dead/Miles Davis), Mike (Emerson Lake and Palmer), Todd (Steely Dan), Sunny (Tito Puente), JoJo (classically trained with a love for Professor Longhair) and Jimmy (Beatles/ Mahavishnu Orchestra) all bring something different to the table. “Above all, after nearly thirty years together, we are arguably each other’s greatest influence,” JB concludes.

That eclectic approach includes the funky New Orleans flavor of “Sell Sell,” their cover of The Animals keyboardist Alan Price’s song from the soundtrack of the 1973 Malcolm McDowell film O Lucky Man!, and the playful nod to a missing feline in the gentle progrock of “Steven’s Cat,” written and recorded in a single day in the studio. Guitarist Jimmy Herring – who joined the band eight years and three albums ago — makes his presence felt with the jazzy feel set against a psychedelic mellotron and the ethereal choir in “Angels Don’t Sing the Blues.” Sunny Ortiz’ and Duane Truck’s percussive interplay on the track creates a driving foundation that seamlessly shifts to a shuffle feel, then six/four time, allowing the song to land gently back to Earth. Herring also coaxes a bluesy harp sound in the honky-tonk barrelhouse of Hermann’s “Poorhouse of Positive Thinking,” the keyboardist’s tongue-in-cheek paean to the pleasures and pitfalls of alcohol. “Jamais Vu (The World Has Changed),” a song dedicated to the memory of a crew member’s passing, finds JB exuding a soulful growl, while the band pays its debts to the delta blues with a rollicking cover of Canadian singer-songwriter Murray McLauchlan’s “Honky Red,” a song Dave’s father once recorded and shared with the band and an outsized take on Howlin’ Wolf’s “Tail Dragger.”

“We tried to keep the songs as live as possible, with a minimum of overdubs,” explained JB about the sessions with longtime producer John Keane at Asheville, NC’s Echo Mountain Studios. “That gave us some of that grit and spontaneity. We recorded as a band, playing together, rather than individual parts. They might not all be first takes, but most were done in a single take. We approached it in an anti-factory way, looking to create our own fun, to have our own unique experience. It’s not homogenized.”

That can be heard on the closing “Street Dogs for Breakfast,” a shaggy-dog countryblues that has a laid back sing-along, quality while “Cease Fire,” with its tribal percussion and bluesy guitars, addresses not only external warfare but the conflicts within, as the closing majestic Herring guitar solo embodies the smooth transition from words to a calming spirit of reconciliation.

JB says the band, true road warriors, continue to explore those happy accidents in the studio. “We wanted to capture that on-stage spontaneity,” says JB, the band having released a pair of live acoustic albums since their last studio release. “We tried to find that place where everybody is familiar with the material, but loose enough to have that element of discovery. The entire band was together in the studio every day, which was a first for us. The songs are created among us, individually and collectively, based on what’s going through our subconscious at the time. Every song is a different experience. We try to sequence those tracks in a way that lets the album flow.”

With next year marking three decades since forming their original line-up in 1986, Widespread Panic is still hungry to be the best band they can be, every single night, for their loyal fan base. Their accomplishments over that time are well-documented. During their impressive, now 30-year run, the band has released 12 studio albums (including Street Dogs) and 43 live albums, selling more than 3 million copies as one of the most successful touring acts in the world. Widespread Panic has broken attendance records at major venues throughout the country, including a staggering 48 sold-out shows at Red Rocks Amphitheatre in Morrison, Colorado. A banner hangs in the rafters at Philips Arena in Atlanta where the band has 18 sellouts, with records also set at Lakefront Arena in New Orleans, Oak Mountain Amphitheater near Birmingham, AL and the New Orleans Jazz and Heritage Festival where Panic has headlined eight times, breaking the single day attendance record with 63,000. The band has headlined most of the major U.S. festivals, including Bonnaroo (eight times), Lollapalooza, Austin City Limits, Lockn’ Music Festival, Outside Lands Music Festival, Forecastle Festival, Phases of the Moon, Rothbury Festival, All Good Music Festival, Gathering of the Vibes and many more. To commemorate Widespread Panic’s 25th anniversary in 2011, the State of Georgia’s Senate and House of Representatives passed resolutions honoring the group for their music, service, charity and longevity, while they were also inducted into the Georgia Music Hall of Fame.

“We acknowledge this is a milestone few groups get to achieve,” admits JB about their remarkable longevity. “It’s like Hemingway’s Old Man and the Sea. Every time we go out there, we learn more tricks, bring that knowledge with us, and then apply it. We’re way more experienced, focused and to the point, but still willing to stretch out without wandering too much.”

Street Dogs represents just that… a blend of veteran musicianship and the ability to keep things sounding fresh at the same time. “Doing this right, you’re more a reporter, a conduit, than a creator,” says JB. “We’re really just discovering something that’s already there. Our creative bank is still open, and they’re handing out free money.” JB says the band is energized by having been in the studio, and are “…excited to play these new songs live and see where they take us… and the audience.”

“Crack yourself open and stuff will keep coming out of you,” he says, concluding with one of his patented JB-isms, even if this one is from his grandfather, another JB. “He told me, ‘Remember to keep an open mind, but not so open that your brains fall out.’” That’s as good a description of the way to approach Widespread Panic’s latest album as any.

An Evening With Widespread Panic