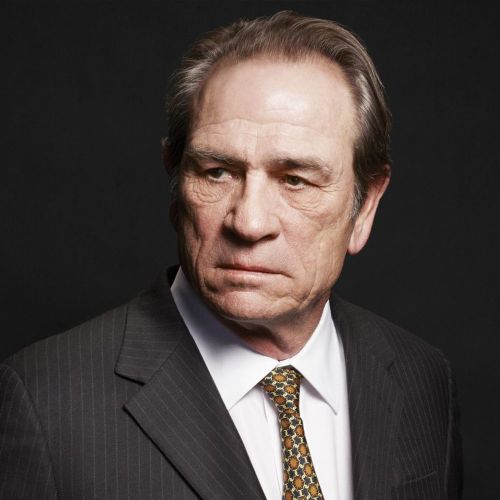 An eighth-generation Texan, actor Tommy Lee Jones, born September 15th, 1946, attended Harvard University, where he roomed with future U.S. Vice President Al Gore. Though several of his less-knowledgeable fans have tended to dismiss Jones as a roughhewn redneck, the actor was equally at home on the polo fields (he’s a champion player) as the oil…

After graduating cum laude from Harvard in 1969, Jones made his stage debut that same year in A Patriot for Me; in 1970, he appeared in his first film, Love Story (listed way, way down the cast list as one of Ryan O’Neal’s fraternity buddies). Interestingly enough, while Jones was at Harvard, he and roommate Gore provided the models for author Erich Segal while he was writing the character of Oliver, the book’s (and film’s) protagonist. After this supporting role, Jones got his first film lead in the obscure Canadian film Eliza’s Horoscope (1975). Following a spell on the daytime soap opera One Life to Live, he gained national attention in 1977 when he was cast in the title role in the TV miniseries The Amazing Howard Hughes, his resemblance to the title character — both vocally and visually — positively uncanny. Five years later, Jones won further acclaim and an Emmy for his startling performance as murderer Gary Gilmore in The Executioner’s Song.

Jones spent the rest of the ’80s working in both television and film, doing his most notable work on such TV miniseries as Lonesome Dove (1989), for which he earned another Emmy nomination. It was not until the early ’90s that the actor became a substantial figure in Hollywood, a position catalyzed by a Best Supporting Actor Oscar nomination for his role in Oliver Stone’s JFK. In 1993, Jones won both that award and a Golden Globe for his driven, starkly funny portrayal of U.S. Marshal Sam Gerard in The Fugitive. His subsequent work during the decade was prolific and enormously varied. In 1994 alone, he could be seen as an insane prison warden in Natural Born Killers; titular baseball hero Ty Cobb in Cobb; a troubled army captain in Blue Sky; a wily federal attorney in The Client; and a psychotic bomber in Blown Away.

Jones was also attached to a number of big-budget action movies, hamming it up as the crazed Two-Face in Batman Forever (1995); donning sunglasses and an attitude to play a special agent in Men in Black (1997); and reprising his Fugitive role for the film’s 1998 sequel, U.S. Marshals. The following year, he continued this trend, playing Ashley Judd’s parole officer in the psychological thriller Double Jeopardy. The late ’90s and millennial turnover found Jones’ popularity soaring, and the distinguished actor continued to develop a successful comic screen persona (Space Cowboys [2000] and Men in Black II [2002]), in addition to maintaining his dramatic clout with roles in such thrillers as The Rules of Engagement (2000) and The Hunted (2003).

2005 brought a comedic turn for the actor, who starred in the madcap comedy Man of the House as a grizzled police officer in tasked to protect a house full of cheerleaders who witnessed a murder. Jones also took a stab at directing that year, helming and starring in the western crime drama The Three Burials of Melquiades Estrada. In 2006, Jones appeared in Robert Altman’s film adaptation of A Prairie Home Companion, based on Garrison Keillor’s long running radio show. The movie’s legendary director, much loved source material and all-star cast made the film a safe bet for the actor, who hadn’t done much in the way of musical comedy. Jones played the consumate corporate bad guy with his trademark grit.

2007 brought two major roles for the actor. He headlined the Iraq war drama In the Valley of Elah for director Paul Haggis. His work as the veteran father of a son who died in the war earned him strong reviews and an Academy Award nomination for Best Actor. However more people saw Jones’ other film from that year, the Coen brothers adaptation of No Country for Old Men. His work as a middle-aged Texas sheriff haunted by the acts of the evil man he hunts earned him a Screen Actors Guild nomination for Best Supporting Actor. The actor co-starred with Stanley Tucci and Neal McDonough for 2011’s blockbuster Captain America: The First Avenger, and reprised his role as a secret agent in Men in Black 3 (2011). In 2012 he played a Congressman fighting to help Abraham Lincoln end slavery in Steven Spielberg’s Lincoln, a role that led to an Oscar nomination for Best Supporting Actor.

An Evening With  Tommy Lee Jones