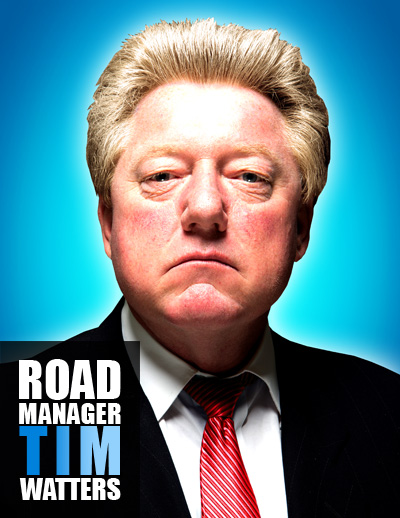 Political Comedian, and Bill Clinton Impersonator. Tim Watters has appeared on The Tonight Show with Jay Leno over 200 times

With over 200 appearances on NBC’s The Tonight Show with Jay Leno, Tim Watters spent more than two decades as the preeminent impersonator of President Bill Clinton. Widely known as the man who popularized the art of political impersonation and its intersection with political comedy, Tim Watters is a true professional and an industry expert.…

With over 200 appearances on NBC’s The Tonight Show with Jay Leno, Tim Watters spent more than two decades as the preeminent impersonator of President Bill Clinton. Widely known as the man who popularized the art of political impersonation and its intersection with political comedy, Tim Watters is a true professional and an industry expert.

Aside from appearing in dozens of television shows and major motion pictures, Tim Watters has worked with major brands such as General Electric, Ford, KPMG, IBM, McDonald’s, Pfizer, Sony, among hundreds of others.

Tim Watters now pursues the role of Bill Clinton and “Mr. President” on a full time basis for television, film and special events. To prepare, he wets his hair, applies a grey mousse, and then blows it dry using white hair spray for highlights. The final look is extremely believable, but it doesn’t stop there. Watters is accompanied by four or five people as Secret Service agents, complete with earpieces and sunglasses, and occasionally has a limousine decked out with American flags with the stereo blasting Hail to the Chief.

The likeness to Bill Clinton as “Mr. President” has garnered Tim Watters national recognition on such shows as The Tonight Show, Entertainment Tonight, CBS Morning News, CNN, Larry King Live and Dateline NBC. Tim Watters has also been a celebrity guest on television shows from Japan to Germany, AND he has even learned to play the saxophone.

Tim Watters is a Road Manager for Politicos Comedy Brigade, where he uses his expertise in entertainment to ensure that major engagements and live political comedy shows go on without a hitch.

Having Tim Watters perform was an executive treat. Once you have gone presidential, everything else is inconsequential.

They were still talking about you the next day!

He was the highlight of the convention. He was absolutely fantastic.

Tim was just terrific! The audience was shocked.

There is no question that you were the highlight of our meeting. I was particularly impressed with ability to take our industry specific information and create some great jokes from it.

The audience was rolling in the aisles.

Tim was the best speaker we have ever had.