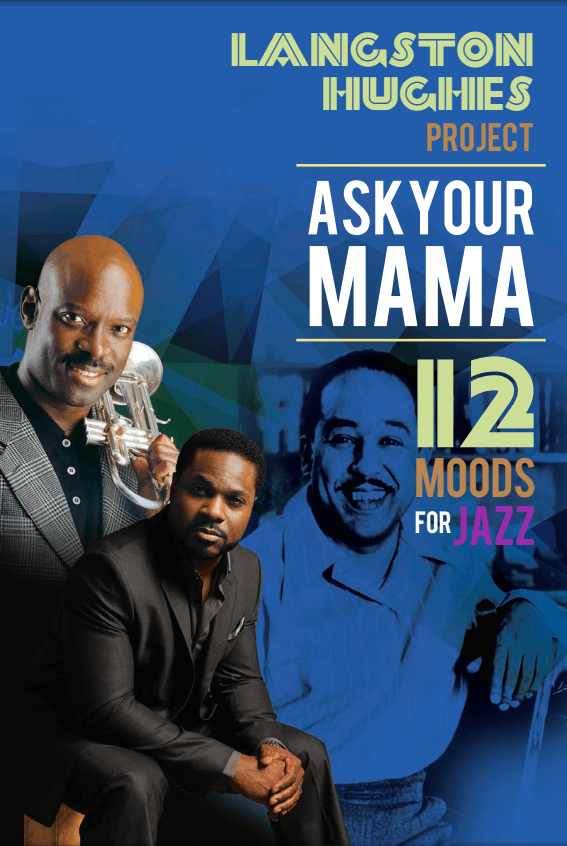 With Malcolm-Jamal Warner and the Ron McCurdy Quartet

The Langston Hughes Project is a multimedia concert performance of Langston Hughes’s kaleidoscopic jazz poem suite. Ask Your Mama is Hughes’s homage in verse and music to the struggle for artistic and social freedom at home and abroad at the beginning of the 1960s. It is a twelve-part epic poem which Hughes scored with musical…

The Langston Hughes Project is a multimedia concert performance of Langston Hughes’s kaleidoscopic jazz poem suite. Ask Your Mama is Hughes’s homage in verse and music to the struggle for artistic and social freedom at home and abroad at the beginning of the 1960s.

Jazz was a cosmopolitan metaphor for Langston Hughes, a force for cultural convergence beyond the reach of words, or the limits of any one language. It called up visual analogues for him as well, most pointedly the surrealistic techniques of painterly collage and of the film editing developed in this country in the 1930s and 40s, which condensed time and space, conveyed to the viewer a great array of information in short compass, and which offered the possibility of suggesting expanded states of consciousness, chaotic remembrances of past events or dreams — through montage. “To me,” Hughes wrote, “jazz is a montage of a dream deferred. A great big dream — yet to come — and always yet to become ultimately and finally true.”

By way of videography, this concert performance links the words and music of Hughes’ poetry to topical images of Ask Your Mama’s people, places, and events, and to the works of the visual artists Langston Hughes admired or collaborated with most closely over the course of his career — the African-inspired mural designs and cubist geometries of Aaron Douglas, the blues and jazz-inspired collages of Romare Bearden, the macabre grotesques of Meta Warrick Fuller and the rhythmic sculptural figurines and heads and bas reliefs of Richmond Barthe, the color blocked cityscapes and black history series of Palmer Hayden and Jacob Lawrence. Together the words, sounds, and images recreate a magical moment in our cultural history, which bridges the Harlem Renaissance, the post World War II Beat writers’ coffeehouse jazz poetry world, and the looming Black Arts performance explosion of the 1960s.

Ask Your Mama was dedicated to Louis Armstrong, “the greatest horn blower of them all,” and to those of whatever hue or culture of origin who welcomed being immersed in the mysteries, rituals, names, and nuances of black life not just in America but in the Caribbean, in Latin America, in Europe and Africa during the years of anti-colonial upheaval abroad and the rising Freedom Movement here at home. Not only the youthful Martin Luther King, Jr. but the independence leaders of Guinea and Nigeria and Ghana and Kenya and the Congo fill the chants and refrains of Hughes’s epic poem.

Originally, Langston Hughes created Ask Your Mama in the aftermath of his participation as an official for the five-day Newport Jazz Festival of July 1960, where he shared the stage with such luminaries as Louis Armstrong, Dizzy Gillespie, Horace Silver, Dakota Staton, Oscar Peterson, Lambert, Hendricks, & Ross, Otis Spann, Ray Charles, and Muddy Waters. The musical scoring of the poem was designed to serve not as mere background for the words but to forge a conversation and a commentary with the music. Though Hughes originally intended to collaborate with Charles Mingus, and then Randy Weston, on the full performance of his masterwork, it remained only in the planning stages when Langston Hughes died in 1967. Its recovery now in word, music, and image provides a galvanizing experience for audiences everywhere.

Malcolm-Jamal Warner is a well-respected actor and director who first rose to national prominence starring on the celebrated and long-running classic television series “The Cosby Show.” He has continued to achieve success as an actor, but also has received accolades as a poet and bass player. Warner along with his jazz-funk band Miles Long has performed in several major jazz festivals including the Playboy Jazz Festival and has opened for such high profile acts as Earl Klugh and the late Luther Vandross as well as his recent appearance at the historic Apollo Theater.

Warner made his feature film debut in Drop Zone and can be seen in the comedy-adventure Fools Gold starring Matthew McConaughey, Kate Hudson and Donald Sutherland. Malcolm also co-starred in the independent films, Restaurant with Adreinne Brody, A Fare to Remember and The List with Wayne Brady.

On stage, Warner has starred in the off-Broadway play Three Ways Home, Cryin’ Shame, for which he received the NAACP Theater Award for best supporting actor, Freefall at the Victory Garden Theatre in Chicago and in A Midsummer Nights’ Dream at the La Jolla Playhouse in California. Most recently Warner received critical acclaim for his West Coast debut of his one-man theatrical production of Love and Other Social Issues.

A seasoned director, Warner was one of the regular directors on the comedy series Malcolm & Eddie and also directed several episodes of The Cosby Show, All That, Keenan & Kel, as well as a host of music videos. His short film, This Old Man, received critical acclaim on the theater festival circuit. Additional directing credits include The Fresh Prince of Bel-Air, Sesame Street, and the AIDS awareness video Timeout: The Truth About HIV, AIDS and YOU. The video starred Magic Johnson and Arsenio Hall, earned Warner the NAACP Key of Life Image Award.

For four seasons Warner was heard as the voice of the “Producer” on PBS’s The Magic School Bus. Currently he can be heard on the audio book version of The Marvelous Effect published by Berkley Trade as well as Simon & Schuster’s Fatherhood by Bill Cosby. Born in Jersey City, New Jersey, Warner currently lives in Los Angeles, California.

The Life Of Langston Hughes

The Langston Hughes Project was a tremendous success at Clemson University. Dr. Ron McCurdy and colleagues have created an amazing multi-media performance of Langston Hughes: Ask Your Mama: 12 Moods for Jazz. The use of the spoken word, visually stimulating images from the Harlem Renaissance, and great music performed by their jazz quartet, made for a fantastic celebration of life and creativity. Dr. McCurdy’s masterclass for Clemson’s jazz ensemble was definitely a highlight of the students’ musical experiences this year, for he is an experienced educator who knows how to communicate with students. I highly recommend this project to anyone who wants an intellectually stimulating and musically electrifying performance.

The Langston Hughes Project is a truly magnificent event. It combines quality entertainment, with key educational information. It is uplifting and truly special, and is attractive and valued by all segments of the community. A wonderful event that we definitely plan on bringing back to our Cal Poly community.

The Langston Hughes Project attracted the most diverse audience I have ever seen on our campus. Young and old, black and white, students and teachers, university administrators and community members all enjoyed the celebration of the artistic accomplishments and contributions of black Americans. In addition to being a fine musical performance and an exquisite display of African-American art and poetry, the Langston Hughes Project fosters an atmosphere of racial reconciliation and understanding.