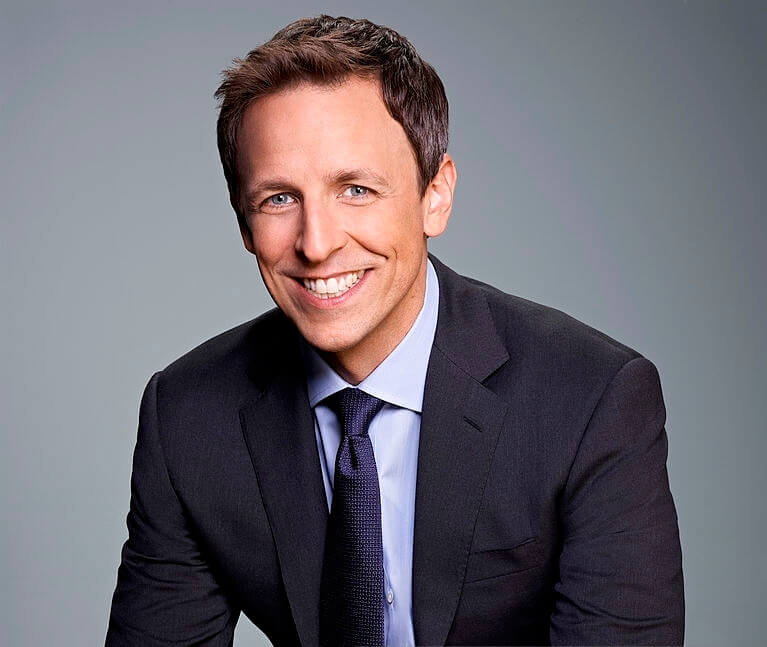 Seth Meyers is an Emmy Award-winning writer and current host of “Late Night with Seth Meyers.” Meyers was named one of the 2014 “Time 100,” Time magazine’s 100 most influential people. Meyers also hosted the 66th Primetime Emmy Awards. Meyers began his TV career with “Saturday Night Live” in 2001, where he was a cast…

Seth Meyers is an Emmy Award-winning writer and current host of “Late Night with Seth Meyers.” Meyers was named one of the 2014 “Time 100,” Time magazine’s 100 most influential people. Meyers also hosted the 66th Primetime Emmy Awards.

Meyers began his TV career with “Saturday Night Live” in 2001, where he was a cast member for 13 seasons. Meyers acted as head writer for nine seasons and “Weekend Update” anchor for eight seasons. In 2011, Meyers won the Emmy for Outstanding Original Music and Lyrics for host Justin Timberlake’s musical monologue. Meyers also garnered 10 additional Emmy nominations for his work as a writer in television.

A graduate of Northwestern University, he studied and performed at iO Theatre before moving on to the Boom Chicago Theater in Amsterdam, Holland. His acclaimed show “Pick-ups and Hiccups” with partner Jill Benjamin toured Europe and eventually caught the eye of “SNL.”

Meyers also executive produces and lends his voice to Hulu’s animated superhero show “The Awesomes,” currently in its third season. In addition, Meyers has joined forces with SNL alums Fred Armisen and Bill Hader to create a series of documentaries and biopics, each about a completely fictitious subject, for IFC named “Documentary Now!”

Additionally, Meyers hosted the 2010 and 2011 ESPY Awards on ESPN and headlined the 2011 White House Correspondents’ Association Dinner to rave reviews.

A Conversation With Seth Meyers

He was FABULOUS! I may say this every year, but I can honestly say that I and everyone who I’ve spoken to believe that this was the funniest show we have ever had on our stage. Seth was simply hilarious. From start to finish. People were in stitches. On top of that, he is the nicest, kindest, most down-to-earth talent we may have ever had – so unassuming and so sweet.