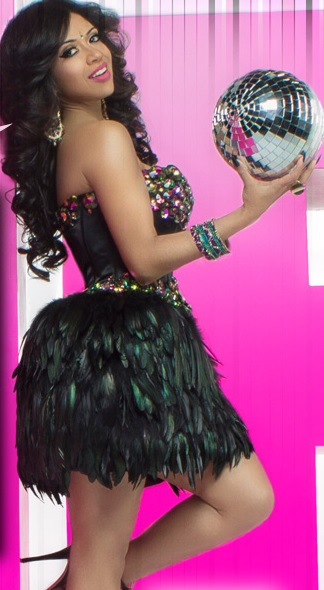 She’s been featured on mainstream hits like Jay Z’s multi platinum album Blueprint 2’s “The Bounce”, Charlie’s Angels Full Throttle Soundtrack’s “The Flyest” with Nas & Pharrell, and of course, Timbaland & Magoo’s instant runaway hit “Indian Flute”, which remains the crowd favorite worldwide in many underground hip hop and desi clubs to this day, with clever lyrics written by the hitmaker Timbaland himself that he says were inspired by Rajé’s unique “sexy sound, feminine shape and exotic persona”.

Since then, she has been credited as the early pioneer who, having been born and raised in the United States, emerged as the most perfectly groomed vocal ambassador to seamlessly bridge the sonic gap between the eastern and western music scene on a global scale.

Coming up through the coveted ranks of the illustrious American hip hop music scene, Rajé managed to bring her Indian flavor to a string of hit releases for many of hip hop’s biggest stars, and by 2005, in less than a 2 year span, suddenly mainstream radio listeners found themselves hypnotized by her sultry Hindi refrains time and again, though she remained relatively unknown as a recording artist herself.

And although many artists and producers, including Timbaland himself, continued their own efforts to pick up where she had left off, her sound was never quite replicated.