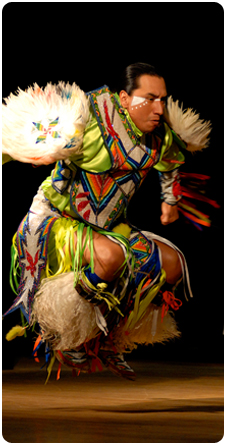 Two-time World Champion Fancy Dancer, a Eagle Dancer, and is from the Meskwaki Nation

Native Pride Dancers are an internationally known high-energy show featuring an innovative blend of modern and traditional Native American dance styles. Our performers’ regalia are adorned with vivid assortments of brightly-colored ribbons, feathers, and beads, and furs; all of which honor our nations’ elders and the legacy of our traditional arts. Our dance is contemporary,…

Native Pride Dancers are an internationally known high-energy show featuring an innovative blend of modern and traditional Native American dance styles. Our performers’ regalia are adorned with vivid assortments of brightly-colored ribbons, feathers, and beads, and furs; all of which honor our nations’ elders and the legacy of our traditional arts. Our dance is contemporary, yet primal, as we use every muscle and breath to express our rich, cultural heritage.

They offer a variety of dance types from solo to large ensemble productions designed for classrooms as well as theaters. Our programs are customized to support and enhance curriculum standards for History, Social Studies, Performing Arts, Physical Education, and Social Behaviors. Based in Minnesota, the Native Pride Dancers represent a proud and vibrant tradition for local, national and international audiences.

As a solo singer, eagle dancer and mens fancy dancer, Larry has performed throughout the world including Japan, Australia, France, Ireland, Brazil, Guatemala, Republic of Moldova, and the Kingdom of Jordon. His captivating energy and enthusiasm inspires others.

We honor our elders through many beautiful forms like music, dance and storytelling to reflect our rich cultural history and customs passed down from generation to generation. We share the true history of bravery, fortitude, generosity and wisdom.

We are passionately devoted to keeping our traditions alive. Our mission is to educate, inspire, motivate and empower diverse communities to bridge cultural gaps through Indigenous traditions.

Larry Yazzie
Two-time World Champion Fancy Dancer and member of The Sac & Fox Tribe of the Mississippi in Iowa/Meskwaki. Larry Yazzie is the founder and Artistic Director for Native Pride Arts. His repertoire includes performances at the Olympics, The Kennedy Center, and the Smithsonian Institute. Larry has performed all over the world and won many awards for his dancing. As an international lecturer, dancer, and educator, he has earned the reputation for being one of the nation’s leading experts on Native American dance. In May, 2010 he and his son Jessup were the sole U.S. performers invited for performances and workshops throughout northern France.

He founded Native Pride Arts to give back to his community and to the world. By sharing life stories through music, dance and storytelling, we nurture meaningful communication among all people. Larry’s goal is to share cultural traditions through artist-in-residency performances, workshops, lectures, classroom instruction and performances enhancing access to diverse, multicultural artists for people of all ages and backgrounds. His warm, enthusiastic spirit truly reflects the beauty of Indigenous people. Following the tradition of his elders, he is giving back enriching the lives of First Nations for generations to come.

Jessup Yazzie
Jessup dances the Teen Boy’s and Adult Men’s Northern-style Fancy Dance and has been dancing since he could walk. He is from the Lakota/Meskwaki and Dine (Navajo) Nations and has been growing up in the Twin Cities in Minnesota and in South Dakota. Jessup’s dancing career started when he won his first trophy in Roseau Canada at the age of 2 and then again at the world’s largest Powwow, The Gathering of Nations, held in Albuquerque, New Mexico when he was 3 years old. Jessup has been competing in Powwows ever since and continues to take top honors.

Aside from Powwows Jessup has performed in theatres across the nation with such acts as The Kevin Locke Trio, Keith Secola and the Wild Band of Indians and at the ages of five and six, Jessup toured with “Spirit the Seventh Fire”.

In addition to participating in the 2005 and 2013 Macy’s Thanksgiving Day Parade in New York City, Jessup travelled with The Native Pride Dancers to Japan and Jordan in 2006 and 2012, respectively.

Jessup has been traveling and doing shows with his dad, Larry Yazzie, founder of Native Pride Dancers, since he was a young boy doing educational presentations at schools and performances for festivals and corporate events. Jessup was among the Native Pride Dancers troupe that performed at the Kennedy Center in Washington DC in 2008.

Jessup enjoys playing basketball and other sports and as a 15 year old young man, he is looked up to by his peers and audiences across the world who are mesmerized by his passion and talent.

“I enjoy helping other people feel good through my dance and inspiring other kids to be open minded and learn about other cultures”, he adds.

Thomas Cain
Thomas Cain is a member of the Ojibwe tribe in Lac Courte Oreilles Wisconsin. Thomas is a northern style singer for Native Pride and joined Native Pride in 2008 on the road to performances in Chariton Iowa and the Sheldon Theatre in Red Wing Minnesota.

Thomas toured with a major traveling production called “Spirit the Seventh Fire” in 2005. Thomas has sang with the drum group “Pipestone”, out of Wisconsin for most of his career and has recently started his own drum group called, “War Thunder”.

Thomas has sung with many top drum groups in U.S. and Canada. In 2007, Thomas won Album of the Year in the the Native American Music Awards as a member of  Pipestone. The album is called Good Old Fashion Lovin’.

In his travels Thomas has met such people as Mohammed Ali, Wes Studi and Irene Bedard.

Wendall Powless
A proud Dakota/Ojibwe from Odanah, Wisconsin, Wendall dances the Men’s Northern Traditional style, and has been dancing and singing for seven years. As well as his experience as a Native Pride Dancer, Wendall has also been a member of Anoli Dance Troupe in 2007-2008. Wendall has been able to share his gift of dance and song across the country and the world, including the honor of performing at the Kennedy Center in Washington, D.C., in 2008, as well as Japan, and Canada.

A world champion dancer, Wendall holds numerous titles including the Schemitzun World Champion Traditional dancer in 2007, as well as the Men’s Northern Traditional Title in 2008 at the Gathering of Nations Powwow in Albuquerque, New Mexico.

Along with dancing, Wendall is also a gifted singer and composer. Wendall sings with many of the top Powwow drum groups, and has won many singing titles across the country. As a composer, Wendall specializes in combining contemporary and traditional Native music.

In 2005, Wendall was part of a major traveling production called “Spirit: The Seventh Fire”. Wendall currently is traveling to schools across the nation, promoting and educating people on Native American culture, music, and dance with Native Pride Productions.

Lowery Begay
Lowery is from the Dine (Navajo) Nations and was raised on the Navajo Reservation in New Mexico and Arizona. Lowery grew up learning the traditional Navajo ways, by his grandparents. Lowery has been dancing as a hoop dancer and Northern Style Fancy dancer for most of his life, and has been dancing, storytelling and playing the Native Flute professionally for thirteen years.

Lowery competed at the World Hoop Dance contest every year at the Heard Museum in Phoenix, Arizona, and is currently ranked third in the world as a hoop dancer. Lowery holds the 2004 Schemitzun Hoop Dance Champion. In 2005, Lowery was part of a major production as a hoop dancer and fancy dancer called “Spirit: The Seventh Fire”.

Lowery has had the opportunity to share his gift around the world traveling and performing in Japan, Norway, Switzerland, Iceland, Belgium, Germany, Italy, England, and the Grand Opening of the Native American Museum in Washington, D.C.

Lee Goodman Jr.
Lee is an Ojibwe and Menominee, and dances the Northern Traditional, as well as the Prairie Chicken Dance. Lee has been dancing professionally for twelve years, and currently lives in Minneapolis.

Arlan Whitebreast
Arlan is from the Meskwaki Nation, and lives in Tama, Iowa. Arlan is a talented and award winning Grass Dancer. He is an educator, a father, a husband and has had the opportunity to dance with the Native Pride Dancers at the Kennedy Center in Washington, D.C., The Minnesota State Fair, Las Vegas, New York City, and in various schools, universities, festivals, corporate events, and in Theatres.

An Evening With Native Pride Dancers