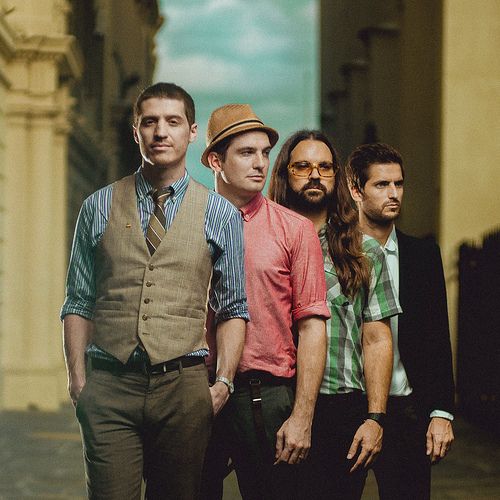 Alternative Rock Band From New Orleans that formed in 2003

Born in the dust-laden family garage with archaic samplers, Radio Shack mics, and broken record players, Mute Math have been noisily calculating their notes for the past few years. This electro-alt rock collaboration between longtime friends Paul Meany (vocals/keys), Darren King (drums), Greg Hill (guitar), and Roy Mitchell-Cardenas (bass) has crept up on the music…

Born in the dust-laden family garage with archaic samplers, Radio Shack mics, and broken record players, Mute Math have been noisily calculating their notes for the past few years. This electro-alt rock collaboration between longtime friends Paul Meany (vocals/keys), Darren King (drums), Greg Hill (guitar), and Roy Mitchell-Cardenas (bass) has crept up on the music scene with the onslaught of a worldwide fan-base driven to their website from countless video blogs and non-stop touring.

The four piece (originating from New Orleans) has scattered influences that are apparent without being obvious, and touch on everything from DJ shadow styled beats, moments of beauty and grandeur a la Bjork, and vocals that pay legitimate homage to Police-era Sting. When asked about this vast expanse of musical territory that we are asked to find them dwelling within, Meany replied, “I blame it on the past forty years of music”. They act on the idea that their magic is to be found in the mixture of countless thoughts. Their live show thrives on this random energy too involving homemade instruments, live sampling, a junked-out keytar, and the kind of freak-outs that keep any given performance worth the price of admission.

An Evening With Mutemath