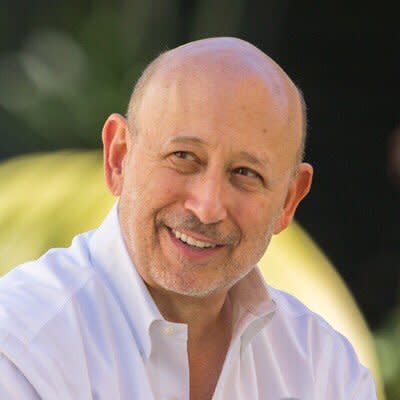 As the former chairman and chief executive officer of The Goldman Sachs Group, Inc. for more than 12 years, Lloyd Blankfein is a highly distinguished authority on global markets, risk management, corporate culture, and leadership.

As the former chairman and chief executive officer of The Goldman Sachs Group, Inc. for more than 12 years, Lloyd Blankfein is a highly distinguished authority on global markets, risk management, corporate culture, and leadership. Only a year into his tenure, Blankfein was faced with the task of guiding one of the world’s most respected, widely recognized financial institutions—as well as its tens of thousands of employees around the world—through a period of unprecedented volatility that included the global financial crisis and subsequent economic recovery. He managed the company deftly through a complicated (and not always friendly) regulatory and media environment — on top of an already fiercely competitive landscape — to high profitability and renewed prestige.

Blankfein was also noted for his strong emphasis on a robust corporate culture. He prioritized forward thinking on social issues ranging from marriage equality and pay parity to immigration and diversity—all while fostering a workforce keenly attuned to the challenges of competing in a globalized economy, balancing risk management with an eye toward opportunity. Goldman Sachs was and remains an employer of choice for top graduates around the world, and alumni of the firm occupy top positions in industry, government and nonprofits throughout the world.

Blankfein offers organizations an entertaining tale of robust, principled, modern corporate leadership, complete with the lessons they’ll need to transform themselves to meet the challenges of tomorrow and delivered with signature wit.

Blankfein began his career as an attorney, and joined Goldman Sachs’ J. Aron Currency and Commodities division in 1982. He was named partner six years later. He was made co-head of J. Aron in 1994 and became co-head of the Fixed Income, Currency and Commodities division as of its formation in 1997. Blankfein served as vice chairman of Goldman Sachs from 2002 through 2003, with management responsibility for the trading divisions, and as Goldman’s president and chief operating officer from 2003 to 2006. In 2006, he became Chairman and Chief Executive and served through 2018.

Blankfein has twice been named one of the most influential people in the world by TIME magazine, and was the Financial Times’ Person of the Year in 2009. He has served on the boards of a number of nonprofits, including the New York Historical Society and the Robin Hood Foundation.

Following his retirement, Blankfein has also been noted for his incisive commentary on Twitter, where he has over 120,000 followers. You can follow him @lloydblankfein.