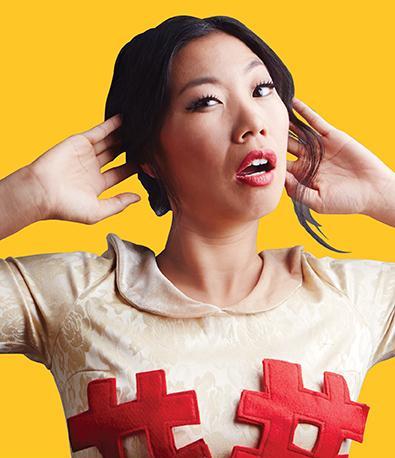 Comedian featured on late night shows on Comedy Central and FX, known primarily for her work as an artist, actress, and solo theater performer

Kristina Wong is a nationally presented solo performer, writer, actor, educator, culture jammer, and filmmaker. She is a commentator on American Public Media’s Marketplace and a contributor to the blog xoJane. Her body of work includes short and full-length solo performance works, outrageous street theater stunts and pranks, subversive internet installations, and plays and sketch…

Kristina Wong is a nationally presented solo performer, writer, actor, educator, culture jammer, and filmmaker. She is a commentator on American Public Media’s Marketplace and a contributor to the blog xoJane. Her body of work includes short and full-length solo performance works, outrageous street theater stunts and pranks, subversive internet installations, and plays and sketch comedy. She was awarded the Creative Capital Award in Performance and a Creation Fund from the National Performance Network to create Wong Flew Over the Cuckoo’s Nest exploring the incidence of suicide among Asian American women, currently available for touring. A DVD of the production is also for sale on Amazon.com for both institutional and private use.

With Houston’s Diverseworks and San Francisco’s ODC Theater, Circuit Network recently co-commissioned and presented Kristina’s Cat Lady, a darkly comic ensemble work. This multi-media theater piece incorporates the psychology behind hoarding (animals and humans), pick-up artist techniques, anecdotes from unmarried women who live alone with cats (“cat ladies”), and Kristina Wong’s attempts to simultaneously end racism and get her cat to stop spraying. Kristina and her Greek chorus of three pick-up artists cast fishing rods across the stage (baited with a host of social lures) as a metaphor for how humans “perform and manipulate” nature. Kristina’s latest solo show, Going Green the Wong Way, was produced by Miami’s Mad Cat Theatre Company in November 2010 and by Circuit Network in San Francisco in July 2011. A one-month run of the production is slated for Los Angeles’ Bootleg Theater in July 2012, followed by a 20-performance run as part of CalArts Festival Theater at Venue 13 during the 2012 Edinburgh Fringe Festival, Scotland, August 2012.

An Evening With Kristina Wong