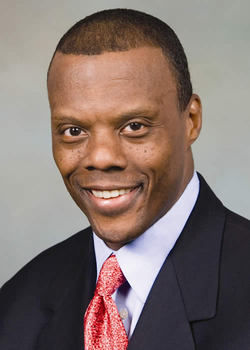 J.C. Watts is chairman of the J.C. Watts Companies, a multi-industry holding company headquartered in Washington, DC, with operations in Texas and Oklahoma. As chairman, Watts provides strategic focus and program leadership to the firm’s business engagements, alliances and initiatives. Watts has built a diverse business organization that includes Mustang Equipment (John Deere dealerships in…

Watts works with clients to implement business development, communications and public affairs strategies. He advises numerous Fortune 500 companies and serves on the Board of Directors of Dillard’s Department Stores. In addition, Watts has successfully worked on major civil rights issues to ensure voting rights and alleviate global poverty and HIV/AIDS in Africa and elsewhere. He is a frequent guest on national and international news shows and has been widely quoted in major newspaper articles, both in the United States and abroad.

Watts was elected to the U.S. Congress from the fourth district of Oklahoma in 1994. In 1998, he was elected by his peers to serve as chairman of the Republican Conference, the fourth-ranking leadership position in the majority party in the U.S. House of Representatives, a position once held by Dick Cheney, Jack Kemp and Gerald Ford. In this capacity, Watts provided daily counsel to the Speaker of the House and participated in bi-weekly meetings with the President of the United States. As a member of Congress representing the fourth district of Oklahoma, Watts served for eight years on the House Armed Services Committee. He authored legislation to create and then he later served on, the House Select Committee on Homeland Security. He also served on the House Transportation and Infrastructure Committee, as well as the House Banking Committee. He led two congressional trade missions to Africa. He co-authored the American Community Renewal and New Markets Act, which President Clinton signed into law in 2000. He was the author of President Bush’s faith-based initiative, the Community Solutions Act of 2001. He also developed legislation with Congressman John Lewis to establish a Smithsonian museum of African American history.

Watts was born on in Eufaula, Oklahoma. He graduated from Eufaula High School in 1976 and attended the University of Oklahoma until his graduation in 1981. Watts earned a Bachelor of Arts degree in Journalism. While at the University of Oklahoma, Watts quarterbacked for the Sooners, leading them to two consecutive Big Eight Championships and Orange Bowl victories. He was voted the “Most Valuable Player” in the 1980 and 1981 Orange Bowls. From 1981 to 1986, he started for Ottawa and Toronto in the Canadian Football League and was voted the “Most Valuable Player” of the Grey Cup, the CFL’s Super Bowl his rookie season. After returning to Oklahoma, Watts served as a youth minister at Sunnylane Baptist Church in Del City, Oklahoma from January 1987 until December 1994, when he became associate pastor. In 1990, he was elected to the Oklahoma State Corporation Commission (the state agency that regulates public utilities and the oil and gas industry) and became chairman before running for Congress in 1994.

Watts has continued his public service by leading a U.S. delegation to Vienna, Austria, at the request of President George W. Bush and Secretary of State Colin Powell, to the Organization for Security and Cooperation in Europe Conference on Racism, Discrimination and Xenophobia. He joined President Bush on his historic trip to Africa in 2003. He co-founded and co-chairs the Coalition on AIDS Relief in Africa. He serves on the board of the Boys Scouts of America. He also created the J.C. and Frankie Watts Foundation to focus on urban renewal and other charitable initiatives.

A Look at Politics in America Today

In this penetrating look at today’s political climate, J.C. Watts discusses the issues facing America, providing audiences with a view of the political world through the eyes of a citizen and four-term congressman. He explores such hot-button issues as the implementation of health care reform, education, fiscal discipline, domestic policy issues, restoring national values, maintaining our national defense and other key topics of interest to your organization. This presentation is uplifting as well as informative bringing to life the headlines and issues that most affect your audience.

Leadership Lessons from the Sidelines and the Aisles of Congress

J.C. Watts shows audiences that no matter what their particular situation, they too can be a leader. Replete with anecdotes and personal stories, Watts’ powerful message of self-determination and teamwork takes audiences to the next level of awareness. Drawing from his experiences as congressman and chairman of the House Republican Conference, quarterback of the Oklahoma Sooners and ordained minister, Watts explores everyday leadership practices and tactical steps that anyone can use to achieve their goals and dreams.