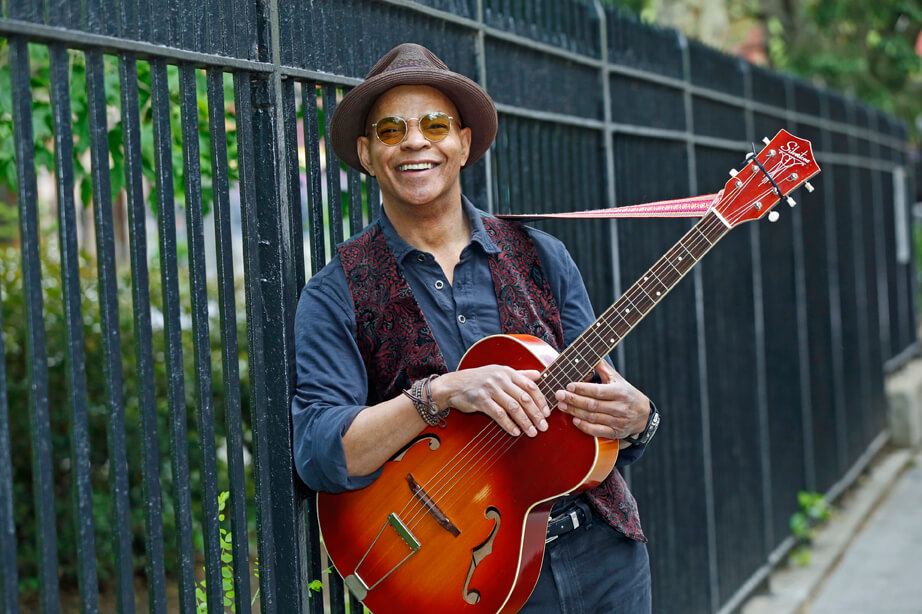 Whether Guy Davis is appearing on “Late Night With Conan O’Brien” or nationally syndicated radio programs such as Garrison Keillor’s, “A Prairie Home Campanion”, “Mountain Stage” or David Dye’s,“World Café”., in front of 15,000 people on the Main Stage of a major festival, or teaching an intimate gathering of students at a Music Camp, Guy…

Whether Guy Davis is appearing on “Late Night With Conan O’Brien” or nationally syndicated radio programs such as Garrison Keillor’s, “A Prairie Home Campanion”, “Mountain Stage” or David Dye’s,“World Café”., in front of 15,000 people on the Main Stage of a major festival, or teaching an intimate gathering of students at a Music Camp, Guy feels the instinctive desire to give each listener his ‘all’.

The routes, and roots, of his blues are as diverse as the music form itself.  It can be soulful, moaning out a people’s cry, or playful and bouncy as a hay-ride.

Guy can tell you stories of his great-grandparents and his grandparents, they’re days as track linemen, and of their interactions with the infamous KKK.  He can also tell you that as a child raised in middle-class New York suburbs, the only cotton he’s picked is his underwear up off the floor.

He’s a musician, composer, actor, director, and writer.  But most importantly, Guy Davis is a bluesman.  The blues permeates every corner of Davis’ creativity.

Throughout his career, he has dedicated himself to reviving the traditions of acoustic blues and bringing them to as many ears as possible through the material of the great blues masters, African American stories, and his own original songs, stories and performance pieces.

His influences are as varied as the days.  Musically, he enjoyed such great blues musicians as Blind Willie McTell (and his way of story telling), Skip James, Manse Lipscomb, Mississippi John Hurt, Elizabeth Cotton, and Buddy Guy, among others.  It was through Taj Mahal that he found his way to the old time blues.  He also loved such diverse musicians as Fats Waller and Harry Belafonte.

His writing and storytelling have been influenced by Zora Neale Hurston, Garrison Keillor, and by the late Laura Davis (his one hundred and five year-old grandmother).

Davis’ creative roots run deep.   Though raised in the New York City area, he grew up hearing accounts of life in the rural south from his parents and especially his grandparents, and they made their way into his own stories and songs.  Davis taught himself the guitar (never having the patience to take formal lessons) and learned by listening to and watching other musicians.  One night on a train from Boston to New York he picked up finger picking from a nine-fingered guitar player.

Throughout his life, Davis has had overlapping interests in music and acting.  Early acting roles included a lead role in the film “Beat Street” opposite Rae Dawn Chong and on television as ‘Dr. Josh Hall’ on “One Life to Live”.   Eventually, Davis had the opportunity to combine music and acting on the stage.   He made his Broadway musical debut in 1991 in the Zora Neale Hurston/Langston Hughes collaboration “Mulebone”, which featured the music of Taj Mahal.

In 1993 he performed Off-Broadway as legendary blues player Robert Johnson in “Robert Johnson: Trick the Devil”.  He received rave reviews and became the 1993 winner of the Blues Foundation’s “Keeping the Blues Alive Award” presented to him by Robert Cray at the W.C. Handy Awards ceremony.

Looking for more ways to combine his love of blues, music, and acting, Davis created material for himself.  He wrote “In Bed with the Blues: The Adventures of Fishy Waters” — an engaging and moving one-man show.  The Off-Broadway debut in 1994 received critical praise from the New York Times and the Village Voice.

Davis’ writing projects have also included a variety of theatre pieces and plays.  “Mudsurfing”, a collection of three short stories, received the 1991 Brio Award from the Bronx Council of the Arts.  The Trial”, (later renamed, “The Trial: Judgement of the People”), an anti-drug abuse, one-act play that toured throughout the New York City shelter system, was produced Off-Broadway in 1990, at the McGinn Cazale Theater.  Davis also arranged, performed and co-wrote the music for an Emmy award winning film, “To Be a Man”.   In the fall of 1995, his music was used in the national PBS series, “The American Promise”.

Davis also performed in a theater piece with his parents, actors/writers Ruby Dee and the late Ossie Davis, entitled “Two Hah Hahs and a Homeboy”, staged at the Crossroads Theatre in New Brunswick, NJ in the spring of 1995.  The show combined material written by Davis and his parents, with music, African American Folklore and history, as well as performance pieces by Hurston and Hughes.  Of Davis’ performance, one reviewer observed that his style and writing “sounds so deeply drenched in lost black traditions that you feel that they must predate him.  But no, they don’t.  He created them.”

For the past decade, Davis has concentrated much of his efforts on writing, recording, and performing music.  In the fall of 1995, he released his Red House records debut “Stomp Down Rider”, an album that captured Davis in a stunning live performance.  The album landed on top lists all over the country, including in the Boston Globe and Pulse magazine.

Davis’ next album, “Call Down the Thunder”, paid tribute to the blues masters, but leaned more heavily towards his own powerful originals.  The electrifying album solidified Davis’ position as one of the most important blues artists of our time.  It too was named a top ten album of the year in the Boston Globe and Pulse, and Acoustic Guitar magazine called it one of the “thirty essential CDs from a new generation of performers”.

Davis’ third Red House disc, “You Don’t Know My Mind”, which includes backing vocals by Olu Dara, explodes with passion and rhythm, and displays Davis’ breadth as a composer and powerhouse performer.  It was chosen as ‘Blues Album of the Year’ by the Association For Independent Music (formerly NAIRD)The San Francisco Chronicle gave the CD four stars, adding, “Davis’ tough, timeless vocals blow through your brain like a Mississippi dust devil.”

Charles M. Young summed up Davis’ own take on the blues best when he wrote his review in Playboy magazine, “Davis reminds you that the blues started as dance music.  This is blues made for humming along, stomping your foot, feeling righteous in the face of oppression and expressing gratitude to your baby for greasing your skillet.”

Guy’s fourth album was, “Butt Naked Free”, the first of all of the albums since that have been produced by John Platania, former guitarist for Van Morrison.  In addition to John on electric guitar, it includes musician friends such as Levon Helm (The Band), multi-instrumentalist, Tommy “T-Bone” Wolk (Hall & Oates, Carly Simon, ‘Saturday Night Live’ Band), drummer Gary Burke (Joe Jackson), and acoustic bassist, Mark Murphy (Walt Michael & Co., Vanaver Caravan).  The musicians all performed “Waitin’ On the Cards to Fall” from this album on the Conan O’Brien show.

A Conversation With Guy Davis