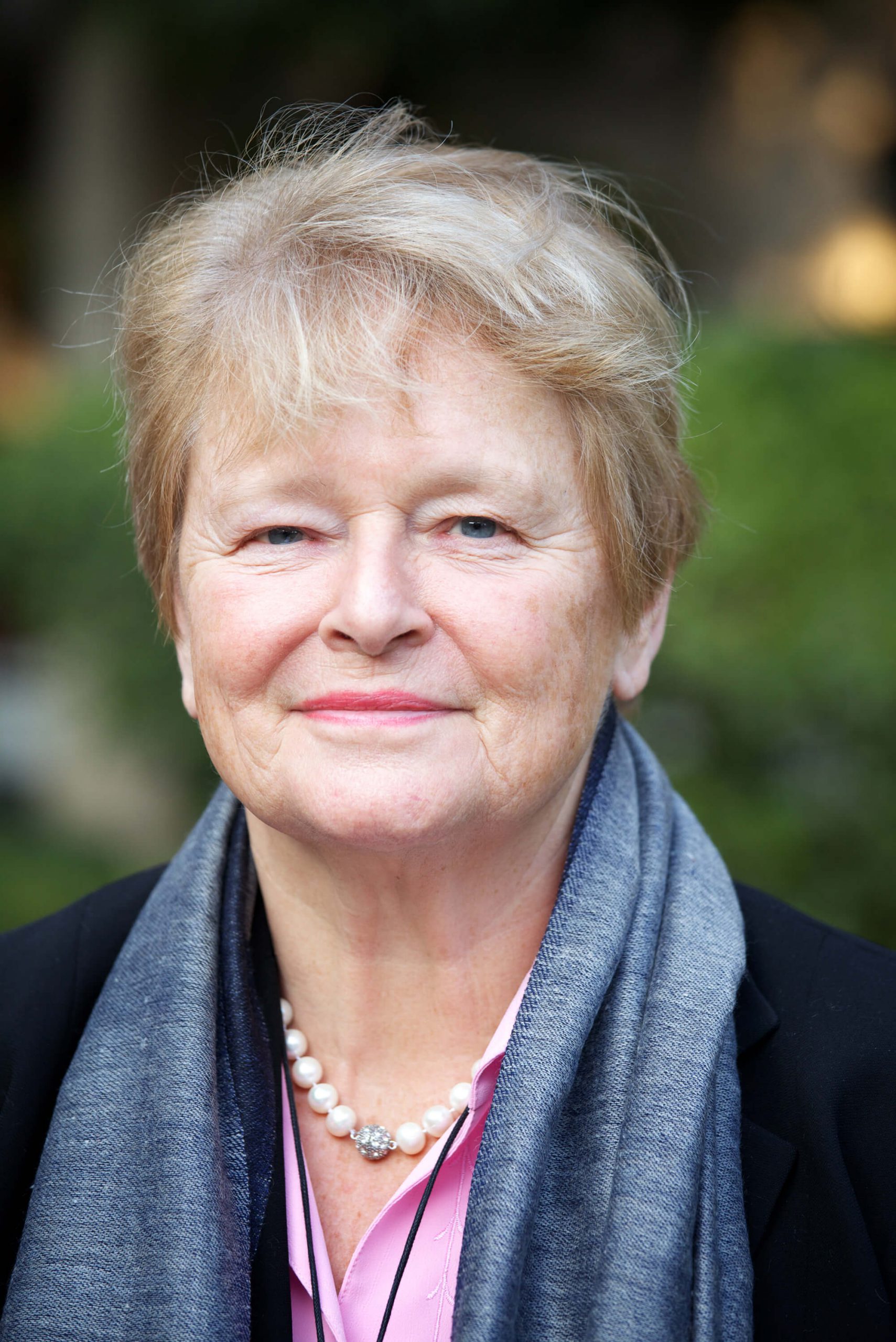 Considered the “mother” of sustainable development, Dr. Gro Harlem Brundtland attributes her passions for public health, the environment, and politic al activism to her father, a doctor and cabinet minister. At the tender age of seven, Dr. Brundtland joined the children’s organization of Norway’s Labour Party, and has been a member ever since. The early…

Considered the “mother” of sustainable development, Dr. Gro Harlem Brundtland attributes her passions for public health, the environment, and politic al activism to her father, a doctor and cabinet minister.

At the tender age of seven, Dr. Brundtland joined the children’s organization of Norway’s Labour Party, and has been a member ever since. The early seeds of internationalism inspired by her family t ook deeper roots during her experience at Harvard, working with distinguished medical experts from around the world. As an environment minister, Prime Minister, and party leader, she gained international recognition as a leader on key global challenges, th e environment, human rights, sustainable development, and global security issues.

Dr. Brundtland completed her medical studies at Oslo University. As a young mother and newly qualified doctor, she won a scholarship to the Harvard School of Public Health wh ere her vision of extending health beyond the confines of the medical world into environmental issues and human development began to take shape. Later employed with the Ministry of Health in Oslo, Dr. Brundtland focused on children’s health issues.

In 1974 she was asked to serve as Norway’s Minister of the Environment focusing on the links between public health and the environment. During the 1970s, Dr. Brundtland lobbied for women’s rights and progressive family policies, and gained a political reputatio n at home, as well as international recognition in environmental circles. At age 41, Dr. Brundtland became the first woman Prime Minister of Norway — and the youngest person ever appointed. Her cabinet of eight women and nine men represented the highest leve l of gender equality in history as Dr. Brundtland continued to lead her country for more than a decade.

Dr. Brundtland chaired the World Commission on Environment and Development, the Brundtland Commission, which popularized the concept of sustainable dev elopment in its landmark report, “Our Common Future.” Their recommendations provided the momentum for the United Nations Earth Summit in Rio de Janeiro in 1992.

She returned to her roots in medicine serving as Director – General of the World Health Organiza tion (WHO) — a position utilizing her considerable skills as a physician, environmentalist, politician, and activist. Under her forward – thinking leadership, WHO confronted the global threat of the SARS virus and her rapid response and information networking are largely credited with helping prevent the widespread growth of the disease.

Dr. Brundtland also intensified the debate on global health as key to economic development, and began programs to curb malaria, tobacco use, tuberculosis, and AIDS, as well as a new focus on chronic diseases, diet, and nutrition. Dr. Brundtland left WHO in 2003 after succeeding in getting support for the first ever negotiated agreement on a major public health issue: The Tobacco Convention.

That same year she was recognized as Scientific American’s Policy Leader of the Year for initiating and coordinating a rapid worldwide response to SARS. “There is a very close connection between being a doctor and a politician,” she has said. “The doctor tries to prevent illness, then tries to treat it if it comes. It’s exactly the same as what you try to do as a politician, but with regard to society.”

Dr. Brundtland served as a member of the United Nations “High – level Panel on Threats, Challenges, and Change.” The panel’s 2004 report, “A Mo re Secure World: Our Shared Responsibility,” includes sustainable development as an integral part of a new vision of collective security, and the proposal for “Responsibility to Protect,” the principle applied in 2011 in the cases of Libya and Cote d’Ivoire.

In May 2007, the UN Secretary General, Ban Ki – moon, named Dr. Brundtland, as well as Ricardo Lagos, the former President of Chile, and Han Seung – Soo, the former foreign minister of South Korea, to serve as UN Special Envoys for Climate Change. Also in 2007, she became a founding member of the “Elders,” a group of 11 leaders called together by Nelson Mandela and chaired by Archbishop Desmond Tutu, who contribute their wisdom, independent leadership, and integrity to tackling the world’s toughest problems with the goal of conflict resolution and making the world a better place.

She is a member of the Board of the “United Nations Foundation,” initiated by Ted Turner and his generous gift of $1 billion to the UN and its causes. She also served as a member of “The Independent Commission on Nuclear Non – Proliferation and Disarmament.” In 2010 the UN Secretary General appointed her a member of his “High Level Global Sustainability Panel.”

Dr. Brundtland travels and lectures extensively as a leading voice on clima te change, for a healthier and better educated world, and a champion of sustainable development, which she defines as “meeting the demands of the present generations while preserving the rights of future generations to meet their own needs.”

Her numerous awards include the 1988 Third World Prize for leadership on sustainable development, the Indira Gandhi Prize 1989, and der Internationaler Karlspreis zu Achen 1994. She also received the International Environment Prize from the City of Göteborg in Sweden, and in 2004 the Blue Planet Prize from the Asahi Glass Foundation, Japan.

She holds numerous honorary degrees from major universities, including Oxford, Harvard, and Yale, as well as Cape Town and the All India Institute. But, perhaps her most prized awa rd is her unofficial title in her native Norway, where she is affectionately known as “Landsmoderen,” or “mother of the nation.”

Our Common Future: Sustainable Development in a Deteriorating World
As the emerging effects of climate change are becoming ever more evident, we find ourselves not only facing a financial crisis, but an increasing pattern of worsening scenarios due to global warming.

To combat potential deterioration, poverty reduction must happen in parallel with emissions reduction, two of the most important challenges facing us today. We must simultaneously succeed on both fronts. This is what sustainable development is all about.

In this keynote, Dr. Brundtland explores potential solutions. She stresses the importance of taking the right steps across both the private and public sector to safeguard the planet on which we all depend, and move towards a future of sustainable development – a future that is better, more just, and more secure.

How Women’s Rights Can Save the World
In this keynote presentation, Dr. Brundtland explains the importance that women, their rights, and their great impact on children, families and communities, has on global policy, economies, societies, and humanity – a fundamental issue across the world and across all religions.

The Health of a Nation, the Health of an Economy
One of Dr. Brundtland’s enduring goals – advancing the status of health on the political agenda, and into the minds of government leaders and not only health ministers – still persists today.

During her time at the World Health Organization, Dr. Brundtland took the initiative, based on her experience linked to environment and development, to have a broad analysis made on the true relationship between human health and human development, and between health and the economy.

The results yielded core concepts on human nature, supporting Dr. Brundtland’s mandate that when we invest in the health and education of all people, and in a clean environment, progress will follow and poverty can be overcome.

The Triple-Bottom Line
Global Health Security: Putting a Stop on the Next Pandemic

WHO & the Battle Against SARS: How We Confronted & Contained the Global Expansion of SARS

A Woman’s Perspective in Leadership 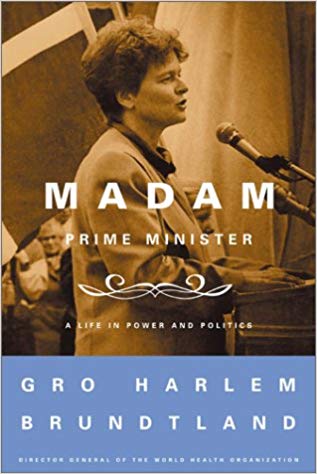 Madam Prime Minister: A Life in Power and Politics

Our event was wonderful last night and Gro was in fine form. She really rose to the task of trying to integrate many themes, which came naturally from her global perspective.

What wonderful and tireless human beings Gro and Arne Brundtland are. We were greatly honored to have them with us for two days. The excitement and energy generated by Dr. Brundtland can still be felt throughout the school and across campus.