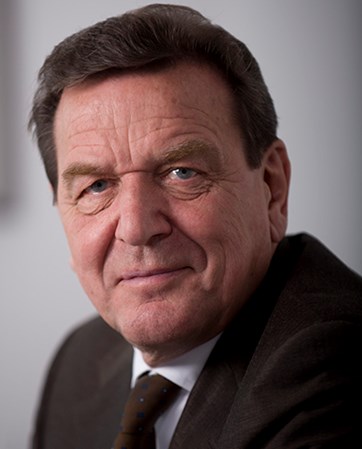 When companies invite Former Chancellor of Germany Gerhard Schröder to speak at an event, they know their audiences are going to be informed about geopolitics on a level beyond what they read in the papers or hear in the news cycle.

The twice-elected leader of Germany, Chancellor Gerhard Schröder has been a major force on the world’s political stage for nearly a decade. Known for his charismatic delivery and unparalleled insights, Chancellor Schröder is a leading world statesman and internationally recognized authority on global relations, economic development and social change.

Gerhard Schröder is the first of a new generation of vibrant German leaders. He took on the newly reunited Germany and boldy ushered the world’s third largest economy into the 21st century.

A charismatic and powerful national figure, Gerhard Schröder was elected Chancellor in 1998. In his seven years in office, Gerhard Schröder did more to modernize Germany’s economy than had been accomplished in decades. Elected to a second term in 2002, Chancellor Schröder increased his country’s influence on a global level by not only taking strong stands on global issues, but also sending German troops to hotspots around the world; this was an enormously bold act that required changing Germany´s Constitution.

Gerhard Schröder was born into poverty in Northwestern Germany in 1944. His widowed mother labored on farms and as a cleaning woman to support her two children. The family lived in a wooden shack, and sometimes had to beg for food. Shunned as a child for his poor, meager appearance, he attended high school at night while working as a sales clerk. At 19, he enrolled in a night program at the law school at the University of Göttingen while working days at an ironmonger’s shop.

Meanwhile, Chancellor Schröder was laying the groundwork for a career in politics. He joined the Social Democrats in 1963, and in 1978 became the federal chairman of the party´s Youth Organization. From there it was a short trip to the National Parliament, to which he was first elected in 1980.

Hailed by one German newspaper as the most charismatic German politician since Willy Brandt, Gerhard Schröder was young and optimistic, a breath of fresh air in the stodgy German Bundestag.

Moving swiftly on, Chancellor Schröder focused on Lower Saxony, his home and Germany´s largest federal state, in 1986 and quickly became the State´s Prime Minister. In 1998, he stood for national election and a tremendous victory catapulted him into the Chancellor’s seat.

An Evening with Gerhard Schröder