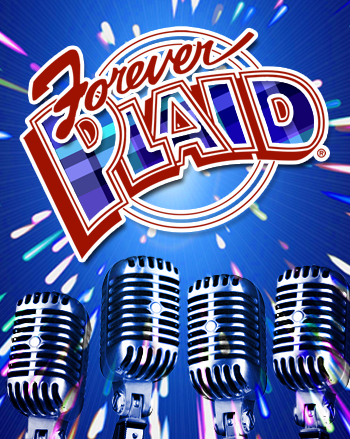 Relive an era when doo-wop was king, big hairdos were in, cars had enormous fins, and the harmonizing bands of the 50s were all the rage. This hallmark jukebox musical comedy by Stuart Ross centers on a quartet whose dream of recording an album ended in a bus collision while on their way to their…

Relive an era when doo-wop was king, big hairdos were in, cars had enormous fins, and the harmonizing bands of the 50s were all the rage. This hallmark jukebox musical comedy by Stuart Ross centers on a quartet whose dream of recording an album ended in a bus collision while on their way to their biggest gig. Now Forever Plaid has been miraculously revived for the show that never was.

You’ll be humming along with the great nostalgic pop hits of the 1950’s and rollin’ in the aisles from the delightful patter of the original clean-cut boy band – The Plaids.

Featuring such hits as Sixteen Tons, Chain Gang, Three Coins in the Fountain, Perfidia, Cry, Catch a Falling Star, Day-O, Gotta Be This or That, Matilda, and Heart and Soul.

The Plaids get a chance to look back at their lives, and they discover that they didn’t just have wonderful lives; their lives were wonderful, because they lived them together. Together they can achieve the unimaginable, the unexplainable.

Director Erik Stein said that he is thrilled to help four genuinely nice guys bring a little happiness and harmony to a world that’s full of discord, mean reality shows, and sensationalistic news.

The cast includes Jeff Parker as Frankie, Richie Ferris as Smudge, Kyle Smith as Sparky and Nick Tubbs as Jinx.

An Evening With Forever Plaid

The four part harmonies are beautiful and the group takes the audience on a trip down memory lane to some of the best close harmony songs of the 1950s.

Entirely enchanting, utterly entertaining, awesome! … will put a smile on your face, a hum in your throat and a tap to your feet.