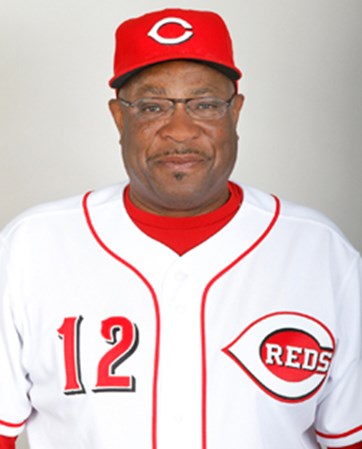 Dusty is an accomplished and versatile speaker. He easily connects with his audience by sharing candid stories of his life experiences. Dusty’s gift for relating his fascinating life experiences (both on and off the field) have been enjoyed by audiences all over the country.

In 2006, Dusty Baker completed his fourteenth season as a Major League Baseball manager with a winning record of 1,162-1,041 and a .527 winning percentage. Dusty finished his career as the Chicago Cubs manager winning 322 games. After leaving Chicago and providing expert baseball analysis for ESPN, he’s now the manager of the Cincinnati Reds.

Since 1930 only three other managers have more wins in a Chicago uniform. Dusty started his managerial career in 1993 with the San Francisco Giants and set the San Francisco franchise record for most wins. In the Giants franchise history dating back to 1883 Dusty Baker is second only to John McGraw in managerial wins!

Dusty’s hobbies include hunting and fishing. He speaks Spanish fluently. He was an active member of the United States Marine Corps Reserves from 1969 through 1975. He has co-authored You Can Teach Hitting and has produced numerous videos on hitting.

Dusty is very active in the community and supports many charitable organizations, including the Sacramento Children’s Home for Abused Youth, the American Sports Institute, the California Campaign for Libraries, Special Olympics, Swords Into Plowshares and the National Muscular Dystrophy Association. He and his wife Melissa served as honorary chairpersons for the Fourth Annual ALS Say It With Flowers caregivers recognition event.

As a prostate cancer survivor, Dusty has been active in encouraging early detection and treatment.

An Evening With Dusty Baker