Dr. Leana Wen is an outspoken leader among a new generation of physicians. A physician and public health advocate, she has traveled the world listening to patients’ stories. Inspired by struggles during her mother’s long illness, Dr. Wen emerged as change agent empowering patients and leading the charge against overdiagnosis, unnecessary testing and treatment.

Dr. Leana Wen is an outspoken leader among a new generation of physicians. A physician and public health advocate, she has traveled the world listening to patients’ stories. Inspired by struggles during her mother’s long illness, Dr. Wen emerged as change agent empowering patients and leading the charge against overdiagnosis, unnecessary testing and treatment. Dr. Wen pulls back to curtain on the mystique of medicine to meet the patients where they have the greatest needs, challenging the excesses of the U.S. healthcare system.

Dr. Leana Wen is an emergency physician, visiting professor of health policy and management at George Washington University, and a nonresident senior fellow at the Brookings Institution. She is also a contributing columnist for The Washington Post, a CNN medical analyst, and author of the critically-acclaimed book on patient advocacy, When Doctors Don’t Listen: How to Avoid Misdiagnoses and Unnecessary Tests (St. Martin’s Press, 2013) and a forthcoming memoir, Lifelines: A Doctor’s Journey in the Fight for Public Health (Metropolitan Books, July 2021).

Previously, she served as Baltimore’s Health Commissioner, where she led the nation’s oldest continuously operating health department in the U.S. to fight the opioid epidemic, treat violence and racism as public health issues, and improve maternal and child health.

Dr. Wen obtained her medical degree from Washington University School of Medicine and studied health policy at the University of Oxford, where she was a Rhodes Scholar. She completed her residency training at Brigham & Women’s Hospital & Massachusetts General Hospital, where she was a clinical fellow at Harvard Medical School.

A member of the Council on Foreign Relations, Dr. Wen has received recognition as one of Governing’s Public Officials of the Year, Modern Healthcare’s Top 50 Physician-Executives, World Economic Forum’s Young Global Leaders, and TIME magazine’s 100 Most Influential People.

Dr. Wen lives with her husband and their toddler and baby in Baltimore.

COVID-19 and the Future of Healthcare

A Conversation with Dr. Leana Wen 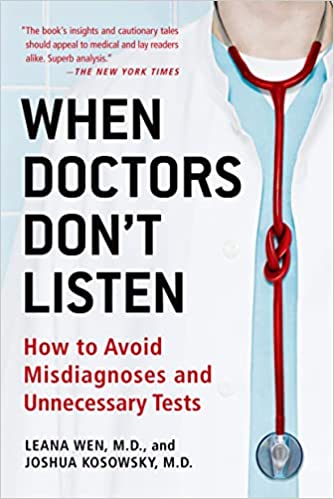 When Doctors Don't Listen: How to Avoid Misdiagnoses and Unnecessary Tests Lifelines: A Doctor's Journey in the Fight for Public Health