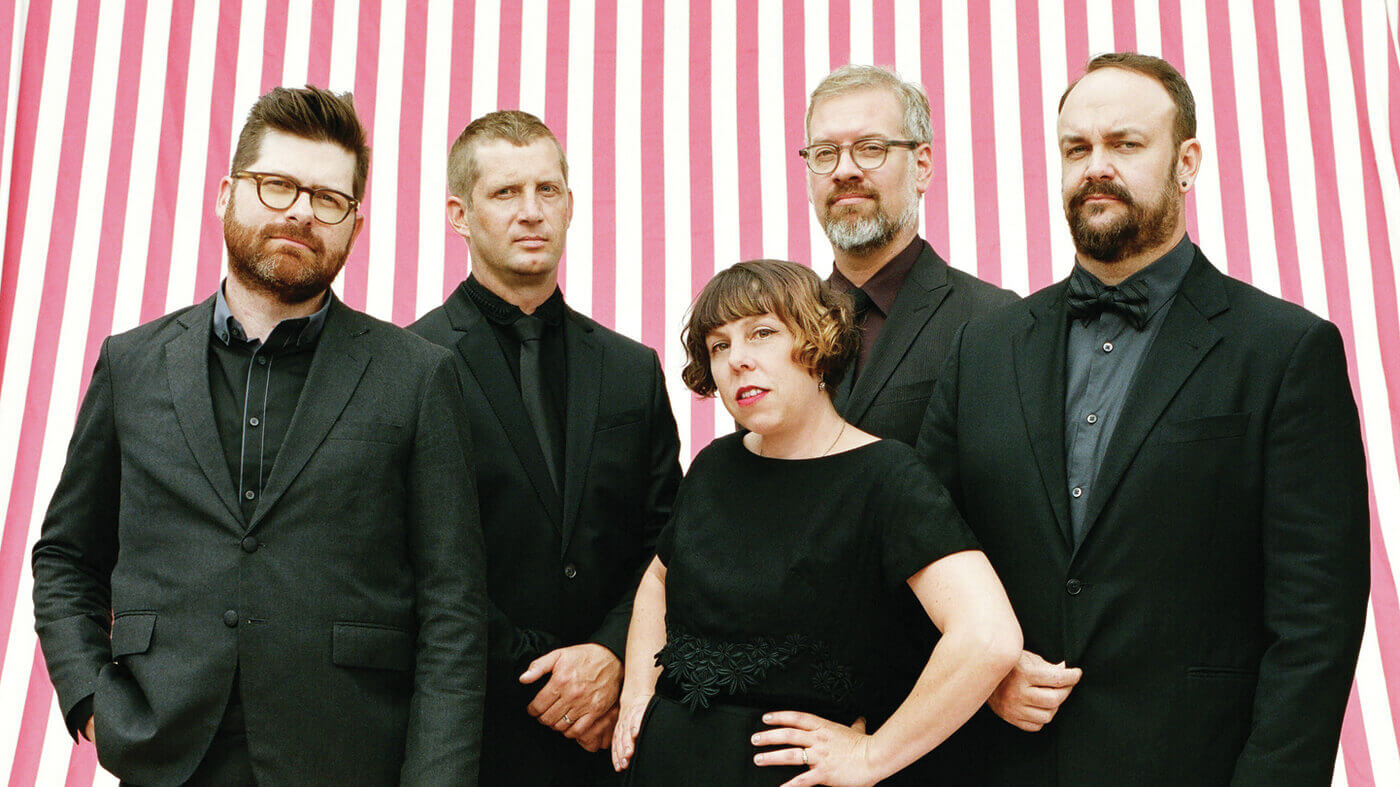 “In some ways, this album was four years in the making,” says Colin Meloy, frontman and primary songwriter of the Decemberists. “We were on hiatus, so we had all the time we could want, no schedule or tour, no expectations.” With the ability to work at their own pace, the resulting record, What a Terrible…

“In some ways, this album was four years in the making,” says Colin Meloy, frontman and primary songwriter of the Decemberists. “We were on hiatus, so we had all the time we could want, no schedule or tour, no expectations.”

With the ability to work at their own pace, the resulting record, What a Terrible World, What a Beautiful World, is the band’s most varied and dynamic work, both musically and emotionally. Since their earliest recordings more than a decade ago, the Decemberists have always been known for their sense of scope and daring—from “The Tain,” an eighteen-and-a-half minute 2004 single based on an Irish myth to their last two ambitious, thematic albums, The Hazards of Love and The King is Dead. This time, though, Meloy explains that they took a different approach: “Let’s make sure the songs are good, and eventually the record will present itself.”

The Decemberists—Meloy, Chris Funk (guitars), Jenny Conlee (keyboards), Nate Query (bass), and John Moen (drums)—had announced that they would be taking a break when their touring cycle finished following the release of 2011’s The King is Dead. Meloy wanted to spend time with his family and work on the children’s book series that became the acclaimed, best-selling Wildwood trilogy. To be sure, they had reached a new peak in their career: King entered the Billboard album charts at Number One, and the track “Down by the Water” was nominated for a Grammy in the “Best Rock Song” category.

Even during the hiatus, the group remained visible: they released an EP of outtakes from the album titled Long Live the King; contributed the song “One Engine” to the Hunger Games soundtrack; and put out We All Raise Our Voices to the Air, a live album documenting their ferocious intensity on stage. They even had the honor of appearing in animated form on The Simpsons, and performed on the season six finale of Parks and Recreation.

Mostly, however, Meloy was concentrating on the Wildwood series—the 1,500-page saga of two seventh-graders who are drawn into a hidden, magical forest, illustrated by his wife, Carson Ellis. So when the band reassembled in May 2013, the plan wasn’t to make an album in their usual way.

“Typically we book four or five weeks in the studio and bang out the whole record,” says Meloy. “This time, we started by just booking three days, and didn’t know what we would record. There was no direction or focus; we wanted to just see what would come out. We recorded ‘Lake Song’ on the first day, live, and then two more songs in those three days. And the spirit of that session informed everything that came after.”

They reconvened in the fall and added some more songs. Gradually, over the course of a year and a half, the album came into focus. What was initially apparent was a fuller, richer sound. “There was a grandiosity to the songs in different ways,” says Meloy, citing Leonard Cohen’s 1977 collaboration with Phil Spector, Death of a Ladies’ Man, as a reference point. “We were layering textures, adding strings and dedicated backing vocals—the early songs created the peaks of the record, and that started to dictate the overall tone and tenor.”

The first batch of songs, Meloy notes, represented the more personal side of his songwriting, a change from the strong narrative thrust that characterized much of the Decemberists’ work. “Writing books as this raw, fantastic narrator has been the outlet for that part of my brain,” he says. “Having a family, having kids, having this career, getting older—all of these things have made me look more inward. So some of these songs are among the more intimately personal songs I’ve ever written.”

Perhaps most notable is “12-17-12,” a song named for, and inspired by, the date that President Obama addressed the nation following the Newtown school shootings, and read the names of the victims. “I watched that speech and was profoundly moved,” says Meloy. “I was hit by a sense of helplessness, but also the message of ‘Hold your family close,’ and this was my way of marking that for myself.” This bewildering, conflicted feeling came out in a phrase near the end of the song—“what a terrible world, what a beautiful world”—that gave the album its title.

As the sessions continued, other elements of the writing and the sound surfaced and a more rounded picture emerged. “As soon as I finished the books, I immediately started writing more narrative songs,” Meloy says. “‘Cavalry Captain,’ ‘Carolina Low,’ those all started coming out. But there was a more subtle voice coming in; I wanted moments of levity, a little tongue-in-cheek. Also, we figured out that the big, pop sound we were making would also make the quieter moments more still, create more dynamic peaks and valleys.”

Without a deadline, the Decemberists were also able to explore every song to completion. “Usually you have to let some songs slide because of time constraints,” Meloy says, “but nothing was relegated to the b-side pile, everything was given a fair shake. Which is a blessing and a curse—we ended up with 18 songs, and each had champions and detractors. There were a multitude of albums you could potentially make—somber, over-the-top pop, folk—and I think every band member would have created a different record.”

Ultimately, What a Terrible World, What a Beautiful World found its final form, a distillation of the best things about this remarkable band. A new way of working led to a renewed excitement about the next chapter for the Decemberists. “I’ve never lived with a record for so long,” says Colin Meloy, “documenting my shifts and changes as a songwriter, with a real sense of time passing. And there’s something very freeing about working on music with absolutely no agenda, and just letting the songs become themselves.”

An Evening With Decemberists