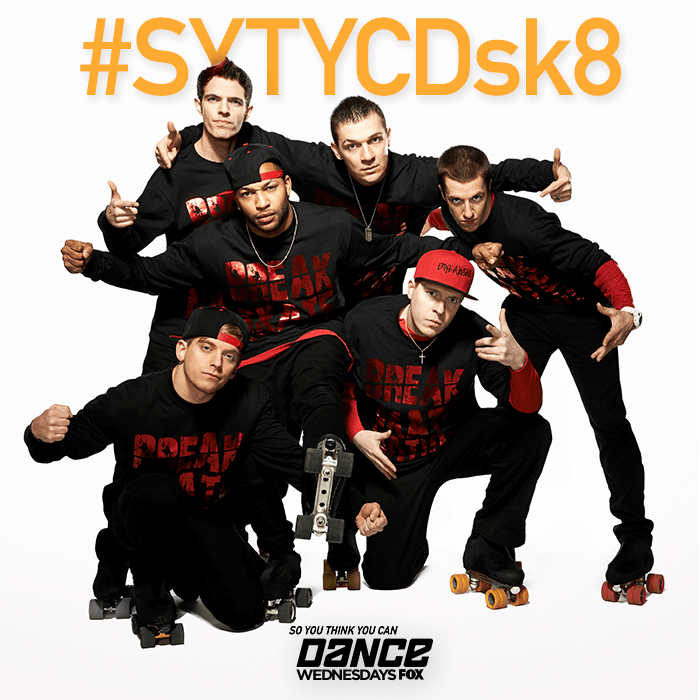 A professional aggressive jam skating team that attempts to push the limits of what can be done on quad skates. They travel across the United States

Breaksk8, based out of Kokomo Indiana was established in late 2000 and created by Shannon Anthony and Jessy Nice. By 2001 they had picked up Jordan McQuiston and Tyson Neal who were also session skaters at the local Kokomo roller rink. The four skaters quickly got bored of just skating at the same rink so…

Breaksk8, based out of Kokomo Indiana was established in late 2000 and created by Shannon Anthony and Jessy Nice. By 2001 they had picked up Jordan McQuiston and Tyson Neal who were also session skaters at the local Kokomo roller rink.

The four skaters quickly got bored of just skating at the same rink so over the next several months they traveled to over 200 rinks throughout the Midwest, during this time they became extremely popular among session skaters all over the country. In late 2001 Breaksk8 got their first show in Orangeburg, SC where they were paid nothing but travel expenses to come teach at the local skating rink. After traveling and performing at several rinks Breaksk8 got a call from the AND1 basketball team wanting them to perform half-time at a game in Breaksk8’s home town of Kokomo. Shannon then called on fellow skater Tony Zane from Lansing, IL to come perform with them and that’s when the 2003 BEC “Breaksk8 Entertainment Crew” was formed.

After the AND1 performance word spread quickly and Breaksk8 started performing for several local High Schools and was then called in by Ball State University in Muncie, IN to perform at an NCAA mens game. In late 2003 Breaksk8 got a call from the Indiana Pacers NBA team and the skaters started performing during home games at Conseco Fieldhouse throughout the 2003/2004 season. Shortly after Breaksk8 became the Official skate team for the NBA, NCAA & WNBA and started entertaining at basketball games all over the country.

In 2005 the motion picture “Roll Bounce” was being filmed at Tony’s home rink in Lansing, IL and Tony was asked to become a stunt skater for the movie. Before the Movie release Fox Searchlight Productions created a nationwide skate competition called “The Roll Bounce Skate Off” to advertise for the movie. The competition was held in 25 major cities and over 200 skate crews shows up to compete. Breaksk8 eliminated several crews in Round 1 made it to the semi finals where they eliminated several more. Breaksk8 had made it to the finals which were held September 19th in Chicago. Five of the best skate crews in the country made it to the finals but Breaksk8 was declared the winner !

After the Movie Breaksk8 continued to perform in the NBA and in 2007 the crew decided to add Diamond Walker who was also from the hometown of Kokomo, Indiana. November of 2007 Shannon received a call from MTV wanting them to be on a new show called “Americas Best Dance Crew” and in January of 2008 Breaksk8 flew to Los Angeles to be apart of the “Live Auditions” with 11 other crews. Out of the 11 Dance Crews competing to make the nine spots on the show Breaksk8 was the only crew on skates. During the “Live Auditions” 3 crews were eliminated and Breaksk8 had secured their spot on the show.

Over the next 10 weeks Breaksk8 lived in LA to film the show and became a fan favorite. ABDC judge Shane Sparks said “Breaksk8 is the most versatile group on this show” and during Michael Jackson Thriller week JC Chasez said “Michael Jackson was a superstar and Breaksk8 danced like superstars”. Breaksk8 had finally made it in the spotlight with over 95 Million people watching the show which made ABDC the highest rated show on cable television.

In September of 2008 Breaksk8 went on a nationwide MTV tour with ABDC heading to 25 major cities throughout the United States. Breaksk8 also performed with Mariah Carey during the 2008 Teen Choice Awards and in early 2009 Breaksk8 launched their own USA tour!

In 2010 the crew traveled to Changsha, China to film China’s version of “Americas Got Talent”.  Breaksk8 became a fan favorite in all of Asia as the TV show has 350 million viewers.

In 2011 Breaksk8 updated their roster by adding Detroit native Kyle Cumper, Florence, Kentucky native Jamie Jarman as well as Nick Antrim from Breaksk8’s home town of Kokomo, Indiana.  After the expansion Breaksk8 traveled to Doha, Qatar to perform at the grand opening of several malls throughout the region!