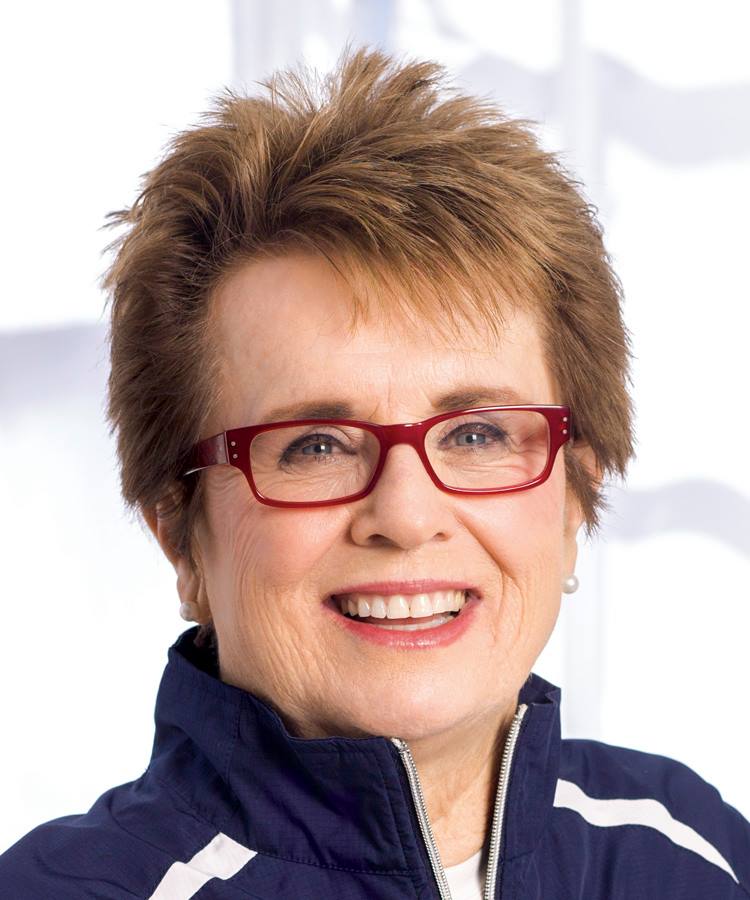 Billie Jean King is the founder of the Billie Jean King Leadership Initiative and the co-founder of World TeamTennis. She has long been a champion for social change and equality. King created new inroads for men and women in sports and beyond during her legendary career and she continues to make her mark today. Born…

Billie Jean King is the founder of the Billie Jean King Leadership Initiative and the co-founder of World TeamTennis. She has long been a champion for social change and equality. King created new inroads for men and women in sports and beyond during her legendary career and she continues to make her mark today.

Born in Long Beach, California, she first played tennis at the age of 11 in the public parks of southern California. King won her first of a record 20 Wimbledon titles when she captured the 1961 Wimbledon Ladies’ Doubles Championship with Karen Hantze in 1961. She went on to win 39 Grand Slam singles, doubles and mixed doubles titles during her career On September 20, 1973, she empowered women and educated men when she defeated Bobby Riggs in one of the greatest moments in sports history – the Battle of the Sexes. This match is remembered for its effect on society and its contribution to the women’s movement.

King was named one of the ‘100 Most Important Americans of the 20th Century’ by Life  Magazine and, in 2009, President Obama awarded her with the Presidential Medal of Freedom, the nation’s highest civilian honor.

In 2014, in partnership with Teneo, she launched the Billie Jean King Leadership Initiative to address inclusion and diversity issues in the workplace.

In 2006, her accomplishments both on and off the court were recognized when the home of the U. S. Open was renamed the USTA Billie Jean King National Tennis Center. In 2007, she co-founded GreenSlam, an organization dedicated to improving the greening of sports. In 2008 King released her first book in more than 20 years. Titled Pressure is a Privilege,  the book shares a collection of life lessons she has used throughout her life and career.

King continues her life mission to help the underserved, most notably through her efforts to provide programming and funding for those infected with, affected by or at risk of contracting HIV/AIDS through her work with the Elton John AIDS Foundation (EJAF). A member of the organization’s Board of Trustees, King has helped the organization raise more than $225 million in support of worthy programs in 55 countries around the world.

Since founding the Women’s Sports Foundation in 1974, Billie Jean has led the organization in its mission to advance the lives of girls and women through sports and physical activity. Since its inception, the Foundation has awarded more than $50 million in educational and cash grants to advance participation, research and leadership in sports and physical activity for girls and women.

In 2010 King was appointed to the President’s Council on Fitness, Sports and Nutrition and in 2013 she was named to the board of the Andy Roddick Foundation. In February 2014, King was named, by President Obama, to the Presidential Delegation to the Winter Olympics in Sochi, Russia.

Pressure is a Privilege and Other Lessons in Business and in Life
The true mark of a champion is having the ability to adjust to conditions and always maintain a focus on being the best you can be, even in the face of high pressure. Sports icon and social justice pioneer Billie Jean, who triumphed over Bobby Riggs in the “Battle of the Sexes,” the ultimate pressure-cooker event, shares the common sense and inspirational life lessons she learned leading up to and after the historic match-up that apply to elevating your game in sports, business, and life at large.

A Conversation with Billie Jean King
The living legend shares a lifetime of stories about equality, inclusion and the importance of connecting with others.

Lift, Learn, Lead
With the millennial generation expected to be 75% of the global workforce by 2025, King looks at the unique opportunity in the workplace for generations past, present and future to work together in an inclusive environment. 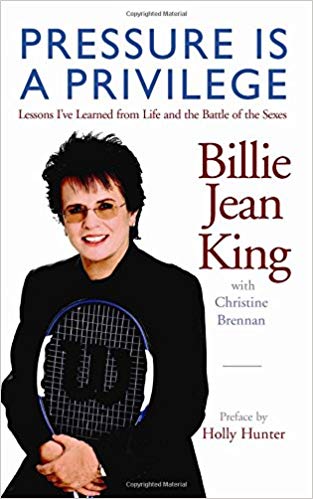 Pressure is a Privilege: Lessons I've Learned from Life and the Battle of the Sexes (Billie Jean King Library)