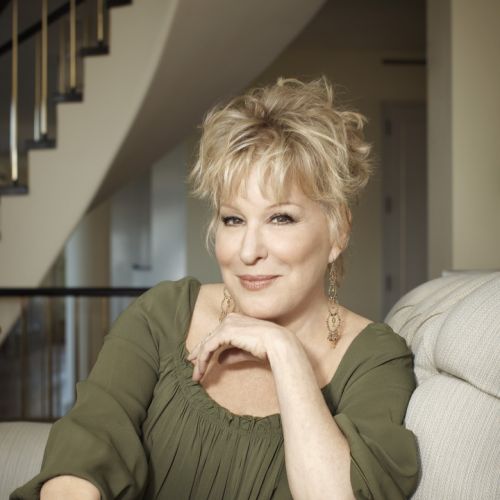 Bette Midler grew up in Honolulu, Hawaii, where she began singing at an early age. After appearing in the film, Hawaii, she finally earned enough money to move to New York City where she made her Broadway debut, playing ‘Tzeitel,’ the oldest daughter in the hit musical, Fiddler on the Roof.

Bette Midler grew up in Honolulu, Hawaii, where she began singing at an early age. After appearing in the film, Hawaii, she finally earned enough money to move to New York City where she made her Broadway debut, playing ‘Tzeitel,’ the oldest daughter in the hit musical, Fiddler on the Roof.

Once she began singing in clubs around town, word reached the owner of the famed Continental Baths, who immediately offered her a job. Performing at the baths, she developed the trademark act that would soon make her one of the most renowned talents of a generation. Her performances of songs like “Boogie Woogie Bugle Boy,” “Delta Dawn” and “Superstar” were unforgettable and caused audiences to fall in love with the self-anointed “Divine Miss M.”

After being discovered by Ahmet Ertegun, the legendary president of Atlantic Records, Bette recorded her debut album, The Divine Miss M, which hit #9 on Billboard’s Top 200 Chart, went platinum, and earned her a Grammy for Best New Artist. After successfully touring the world and returning to Broadway in the Tony winning, Clams On The Halfshell, Hollywood beckoned.

In 1979, Bette made her film debut in portraying a doomed and self destructive rock & roll singer in The Rose, which she earned the Golden Globe for Best Actress, Academy Award nomination, and Grammy Award for Best Pop Vocal performance.

In 1988 Bette starred in Beaches, and received her third Grammy Award, Record of the Year, for the film’s title song, “Wind Beneath My Wings.”  Midler garnered her second Best Actress Golden Globe and Academy Award nomination for Mark Rydell’s For The Boys.  Additional film credits include: Down and Out in Beverly Hills, Ruthless People, Big Business, Scene’s From a Mall, Hocus Pocus, The First Wives Club, The Stepford Wives, Then She Found Me, and The Women.

In addition to her work on stage and in films, Midler made her mark on television with the Emmy Award-winning CBS special Ol’ Red Hair is Back, and two HBO concerts, Live at Last and Art or Bust. HBO’s concert film Diva Las Vegas, won an Emmy Award for her performance.  In 1992, Bette won a Golden Globe and a National Board of Review award for her performance in the television adaptation of the musical Gypsy.

Outside of the spotlight, Midler takes great pride as the founder of the New York Restoration Project which she established in 1995. The organization works to uncover, reclaim and clean up neglected public spaces while nurturing community empowerment and fostering civic pride in local New York communities.

In January 2009 she concluded her critically acclaimed Vegas extravaganza The Showgirl Must Go On at the Colosseum at Caesars Palace, with over 200 performances that were seen by over half-million people in 2 years.

In March 2011, she produced the Tony Award-winning musical Priscilla: Queen of the Desert on Broadway. She recently starred in Parental Guidance and released her 25th overall album It’s the Girls! In April 2014, Midler reissued her 1980 memoir A View From A Broad with a new introduction.

An Evening With Bette Midler

Bette Midler - Wind Beneath My Wings

Bette Midler - From A Distance