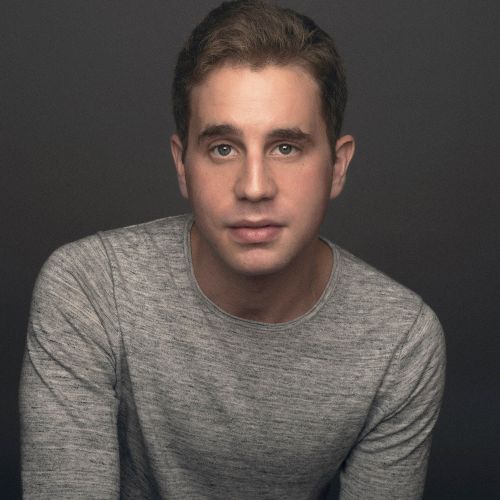 Ben Platt is an actor and singer who has been critically acclaimed for his starring role in the hit Broadway musical “Dear Evan Hansen,” which has garnered him a number of prestigious awards. He also played the role of Elder Arnold Cunningham in popular Broadway musical comedy “Book of Mormon.”

Ben Platt is an actor and singer who has been critically acclaimed for his starring role in the hit Broadway musical “Dear Evan Hansen,” which has garnered him a number of prestigious awards. He also played the role of Elder Arnold Cunningham in popular Broadway musical comedy “Book of Mormon.”

Off the stage, Ben is known for his supporting role as Benji Applebaum in Universal Pictures’ blockbuster musical comedy films “Pitch Perfect” and “Pitch Perfect 2.”

For his performance in “Dear Evan Hansen,” Ben won the 2017 Tony Award for Best Leading Actor in a Musical, as well as the Drama League Award for Distinguished Performance, a prestigious prize previously won by Neil Patrick Harris, Nathan Lane, and Lin-Manuel Miranda. At the age of 23, Ben is the youngest actor to have won the coveted award. Ben also won the Lucille Lortel Award for Outstanding Lead, the Obie Award for Distinguished Performance by an Actor, and was nominated for an Outer Critics Circle Award and Drama League Award during the off-Broadway run. Additionally, Ben was awarded a Grammy for Best Musical Theater Album.

The musical debuted at Arena Stages in Washington D.C. and premiered off-Broadway in New York at 2econdStage Theatre.  Of his performance, The New York Times declares, “…marvelous young actor Ben Platt is giving a performance that’s not likely to be bettered on Broadway this season.” Deadline applauds it as a “movingly sensitive, career-making performance.”

Ben was also seen alongside Meryl Streep in the film “Ricki and The Flash” and in Billy Lynn’s “Long Halftime Walk.” Ben will soon be seen with Salma Hayek and Alec Baldwin in “Drunk Parents.”

Ben made his Broadway debut as Elder Cunningham in Broadway’s famed production of “Book of Mormon,” in which the New York Times called his performance “sensational.” He first originated the role of Elder Cunningham to critical acclaim in the show’s Chicago production for which he won a Broadway World Chicago Award – Best Actor in a Touring Production. Ben sold out his first solo cabaret show at the popular New York City venue, 54 Below.

An Evening With Ben Platt

Ben Platt - Grow As We Go

Ben Platt - I wanna love you but I don’t