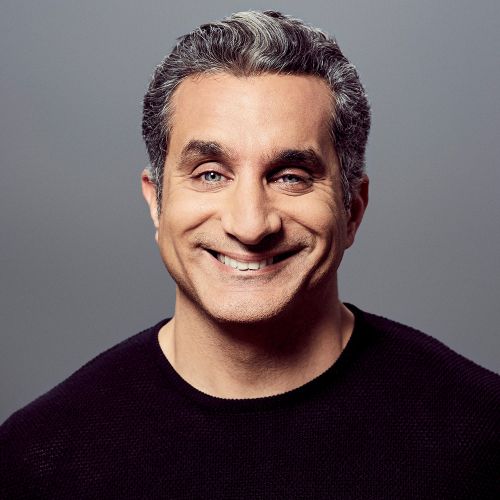 Bassem Youssef, dubbed the Jon Stewart of the Arab World, was the host of popular TV show Al-Bernameg – which was the first of its kind political satire show in the Middle East region. Originally an online 5-minute show, Al-Bernameg became the most watched show in the history of Egyptian TV with an average of…

Bassem Youssef, dubbed the Jon Stewart of the Arab World, was the host of popular TV show Al-Bernameg – which was the first of its kind political satire show in the Middle East region. Originally an online 5-minute show, Al-Bernameg became the most watched show in the history of Egyptian TV with an average of 40 million viewers every week, in addition to over 2 million subscribers on YouTube and 1.2 billion views on his own channel and other channels.

It all started in 2011 when Bassem, who was a heart surgeon ready to leave to Cleveland, started a 5-minute show on YouTube satirizing the state run media which was spreading lies and conspiracy theories in the wake of the Arab Spring. That developed fast into a full-blown TV show with millions of followers.

Al-Bernameg received wide acclaim around the world with coverage in some of the biggest media outlets, topping it off with Bassem’s appearance on the Daily Show with his idol Jon Stewart. Not once but four times. Stewart also made the trip to Cairo to support his prodigy and was a guest of his show.

Bassem was popular with the people but not so much with the different regimes. Under the Muslim Brotherhood regime, a warrant for his arrest was issued and Bassem went through a 6 hours interrogation after which he was released on bail. Bassem continued to poke fun of the people in power and he didn’t stop even after the popular military took over, costing him to be cancelled twice and pushed to terminate his show. Harassments and threats continued, pushing Bassem to flee to the United States where he now lives in Los Angeles.

Bassem is now reinventing his career as a satirist comedian and a story teller, but in a different country and a different language that is not his own. When he is not touring around doing his live performances he is hosting his podcast “Remade in America” or working online changing people’s eating habits through a plant based whole food diet. Bassem wrote the bestselling book “Revolution for Dummies” and is the subject of the critically acclaimed documentary “Tickling Giants.”

In recognition of his success, Bassem was named among Time Magazine’s most influential list for 2013. In November 2013, he was named one of four recipients by the Committee to Protect Journalists for the International Press Freedom Award. In February 2015, Bassem was a spring fellow at the Institute of Politics at the Kennedy School of Government at Harvard. In November 2015, Bassem hosted the International Emmy Awards in New York as the first non-American, non-European personality to ever host such an event.

An Evening With Bassem Youssef

The Daily Show - An Egyptian Satirist in America - Bassem Youssef