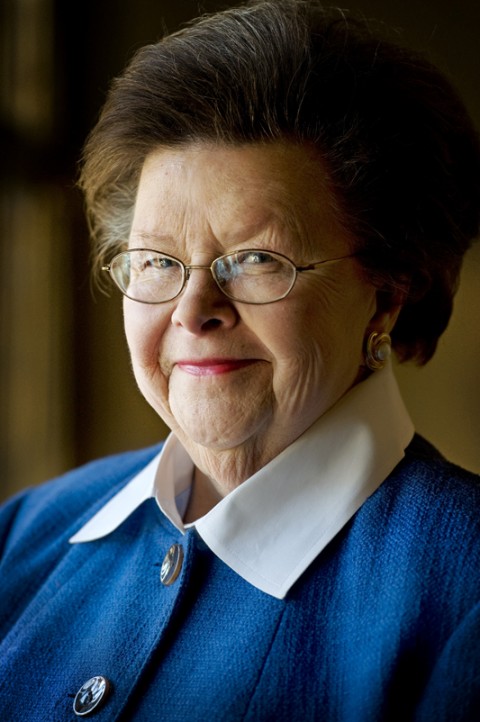 The people of Maryland elected Senator Barbara A. Mikulski to be their U.S. Senator because she’s a fighter – looking out for the day–to–day needs of Marylanders and the long–range needs of the nation. Determined to make a difference in her community, Mikulski became a social worker in Baltimore, helping at–risk children and educating seniors…

The people of Maryland elected Senator Barbara A. Mikulski to be their U.S. Senator because she’s a fighter – looking out for the day–to–day needs of Marylanders and the long–range needs of the nation.

Determined to make a difference in her community, Mikulski became a social worker in Baltimore, helping at–risk children and educating seniors about the Medicare program. Social work evolved into community activism when Mikulski successfully organized communities against a plan to build a 16–lane highway through Baltimore’s Fells Point neighborhood. She helped stop the road, saving Fells Point and Baltimore’s Inner Harbor, both thriving residential and commercial communities today.

Mikulski is a trailblazer. Her first election was a successful run for Baltimore City Council in 1971, where she served for five years. In 1976, she ran for Congress and won, representing Maryland’s 3rd district for 10 years. In 1986, she ran for Senate and won, becoming the first Democratic woman Senator elected in her own right. She was re–elected with large majorities in 1992, 1998, 2004 and 2010.

Mikulski focused on the issues of civil rights, national security, space exploration, education, jobs, research and innovation, women’s health, cybersecurity, seniors, and veterans. She was primary sponsor of the Lilly Ledbetter Fair Pay Act, addressing salary discrimination against women; it was the first bill signed into law in 2009 by President Obama, just days after his first inauguration.

A leader in the Senate, Mikulski was the Dean of the Women, serving as a mentor to other women Senators when they first take office. As the dean, she built coalitions – proving that the Senate women are not solo acts, but work together to get things done.

On December 20, 2012, Mikulski became the first woman and first Marylander to chair the Senate Appropriations Committee, on which she has served since she arrived in the Senate in 1987.

Senator Mikulski was inducted into the National Women’s Hall of Fame in 2011. She was awarded the Presidential Medal of Freedom by President Obama in 2015.

Senator Mikulski retired from the U.S. Senate on January 3, 2017. She accepted a position as Homewood Professor of Political Science at John Hopkins University, and she participates in national speaking engagements on the topics of leadership, innovation, and women’s empowerment.

A Conversation With Barbara Mikulski
She will speak about her career as the longest serving Congresswoman in U.S. history