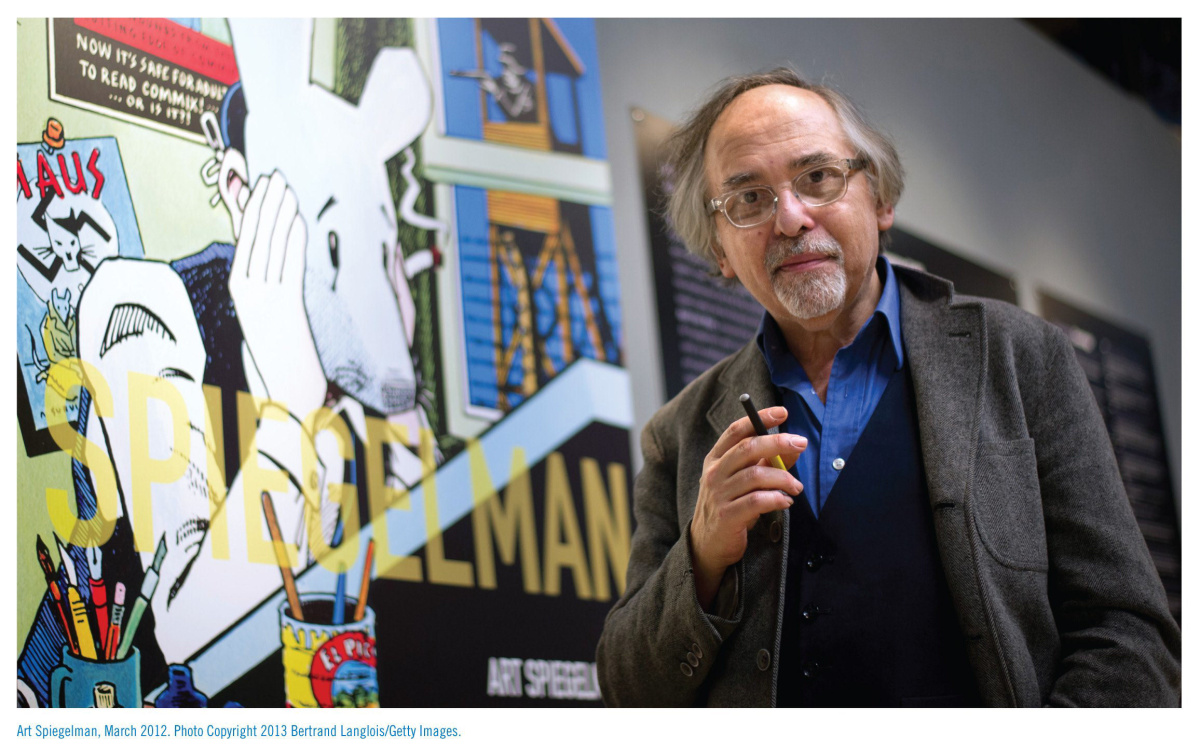 Pulitzer Prize-winning Artist/Illustrator, Author of MAUS, In the Shadow of No Towers, & Breakdowns

Art Spiegelman has almost single-handedly brought comic books out of the toy closet and onto the literature shelves. In 1992, he won the Pulitzer Prize for his masterful Holocaust narrative Maus— which portrayed Jews as mice and Nazis as cats. Maus II continued the remarkable story of his parents’ survival of the Nazi regime and…

Art Spiegelman has almost single-handedly brought comic books out of the toy closet and onto the literature shelves. In 1992, he won the Pulitzer Prize for his masterful Holocaust narrative Maus— which portrayed Jews as mice and Nazis as cats. Maus II continued the remarkable story of his parents’ survival of the Nazi regime and their lives later in America. His comics are best known for their shifting graphic styles, their formal complexity, and controversial content.

In his lecture, “What the %@&*! Happened to Comics?” Spiegelman takes his audience on a chronological tour of the evolution of comics, all the while explaining the value of this medium and why it should not be ignored. He believes that in our post-literate culture the importance of the comic is on the rise, for “comics echo the way the brain works. People think in iconographic images, not in holograms, and people think in bursts of language, not in paragraphs.”

Having rejected his parents’ aspirations for him to become a dentist, Art Spiegelman studied cartooning in high school and began drawing professionally at age 16. He went on to study art and philosophy at Harpur College before becoming part of the underground comix subculture of the 60s and 70s. As creative consultant for Topps Bubble Gum Co. from 1965-1987, Spiegelman created Wacky Packages, Garbage Pail Kids and other novelty items, and taught history and aesthetics of comics at the School for Visual Arts in New York from 1979-1986.

In 2007 he was a Heyman Fellow of the Humanities at Columbia University where he taught a Masters of the Comics seminar. In 1980, Spiegelman founded RAW, the acclaimed avant-garde comics magazine, with his wife, Françoise Mouly—Maus was originally serialized in the pages of RAW. Before being published by Pantheon, who have published many of his subsequent works including illustrated version of the 1928 lost classic, The Wild Party, by Joseph Moncure March.

He and Mouly more recently co-edited Little Lit, a series of three comics anthologies for children published by HarperCollins (“Comics-They’re not just for Grown-ups Anymore”) and Big Fat Little Lit, collecting the three comics into one volume. Currently, he and his wife publish a series of early readers called Toon Books—picture books in comics format. They have co-edited A Toon Treasury of Classic Children’s Comics (Fall 2009). His work has been published in many periodicals, including The New Yorker, where he was a staff artist and writer from 1993-2003.

In 2004 he completed a two-year cycle of broadsheet-sized color comics pages, In the Shadow of No Towers, first published in a number of European newspapers and magazines including Die Zeit and The London Review of Books. A book version of these highly political works was published by Pantheon in the United States, appeared on many national bestseller lists, and was selected by The New York Times Book Review as one of the 100 Notable Books of 2004.

Spiegelman’s work also includes a new edition of his 1978 anthology, Breakdowns (Fall 2008); it includes an autobiographical comix-format introduction almost as long as the book itself, entitled Portrait of the Artist as a Young %@&*!; as well as a children’s book (published with Toon Books), called Jack and the Box.  In 2009 Maus was chosen by the Young Adult Library Association as one of its recommended titles for all students (the list is revised every 5 years and used by educators and librarians across the country).  McSweeney’s has published a collection of three of his sketchbooks entitled Be a Nose.  A major exhibition of his work was arranged by Los Angeles Museum of Contemporary Art, as part of the “15 Masters of 20th Century Comics” exhibit (November 2005). In 2005, Art Spiegelman was named one of Time Magazine’s 100 Most Influential People and in 2006 he was named to the Art Director’s Club Hall of Fame.

He was made an Officier de l’Ordre des Arts et des Lettres in France in 2007 and—the American equivalent—played himself on an episode of “The Simpsons” in 2008.  In fall 2011, Pantheon published Meta Maus, a companion to The Complete Maus – it is the story of why he wrote Maus, why he chose mice, cats, frogs, and pigs, and how he got his father to open up (the new book includes a DVD of the transcripts of Art’s interviews with his father; it is not a graphic novel, but it is populated with illustrations, photos and other images). MetaMaus has been awarded the 2011 National Jewish Book Award in the Biography, Autobiography, and Memoir category.

His newest work is a book produced in collaboration with renowned French artist JR titled The Ghosts of Ellis Island.

In 2011, Art Spiegelman won the Grand Prix at the Angoulême International Comics Festival, marking only the third time an American has received the honor (the other two were Will Eisner and Robert Crumb). The honor also included a retrospective exhibition of his artwork, shown in the Pompidou Center and traveled to the Ludwig Museum in Cologne, the Vancouver Art Gallery, the Jewish Museum in NYC, and the last stop at the AGO Art Gallery of Ontario.

The accompanying book is CO-MIX: A Retrospective of Comics, Graphics, and Scraps. His project, WORDLESS!,a multimedia look at the history of the graphic novel, had its world premiere at the  Sydney Opera House in October 2013 and its US premiere at the Brooklyn Academy of Music in January 2014.

In 2015 he was elected a member of the American Academy of Arts and Letters.

What the %@&*! Happened to Comics?”
A Lecture with Images by Art Spiegelman
Art Spiegelman’s comics are best known for their scratch-board, illustrative style and controversial contents. In his talk “What the %@&*! Happened to Comics?” he takes his audience on a chronological tour of the evolution of comics, all the while explaining the value of this medium and why it should not be ignored. He believes that in our post-literate culture the importance of the comic is on the rise, for “comics echo the way the brain works. People think in iconographic images, not in holograms, and people think in bursts of language, not in paragraphs.” 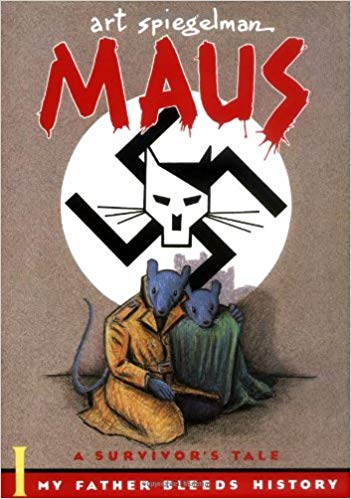 Maus I: A Survivor's Tale: My Father Bleeds History 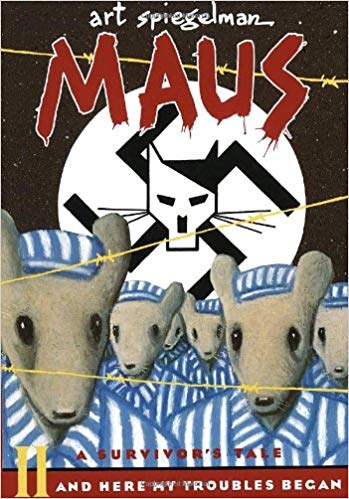 Maus II: A Survivor's Tale: And Here My Troubles Began 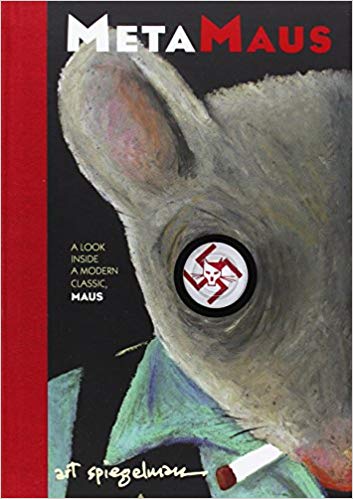 MetaMaus: A Look Inside a Modern Classic, Maus (Book + DVD-R) 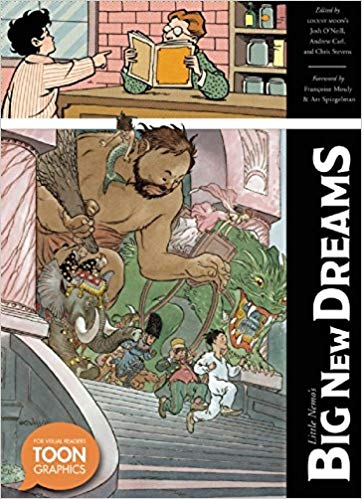 Spiegelman has become one of The New Yorker’s most sensational artists, in recent years drawing illustrations for covers that are meant not just to be plainly understood but also to reach up and tattoo your eyeballs with images once unimaginable in the magazine of old moneyed taste … From his Holocaust saga in which Jewish mice are exterminated by Nazi cats, to the The New Yorker covers guaranteed to offend, to a wild party that ends in murder: Art Spiegelman’s cartoons don’t fool around.