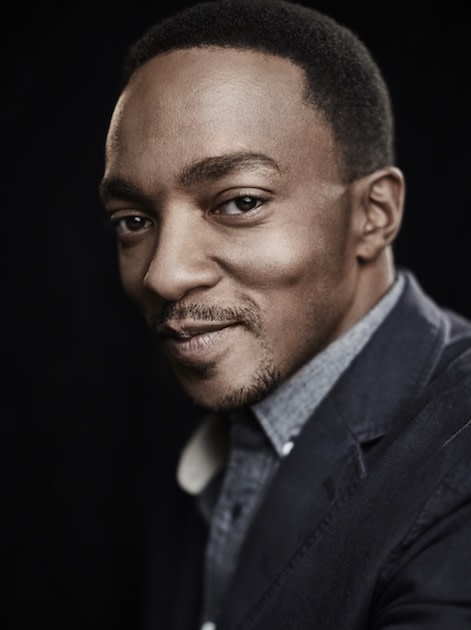 “It’s been an emotional experience, especially in the time in which we live in now. For Marvel to give me the opportunity as a black man from the south to become Captain America, I think, says a lot, not only about the work that I’ve put in to get to this point that they would…

Anthony Mackie was discovered after receiving rave reviews while playing Tupac Shakur in the off-Broadway production Up Against the Wind. Immediately following, Mackie made an auspicious film debut as Eminem’s nemesis, Papa Doc, in Curtis Hanson’s 8 Mile. His performance caught the attention of Spike Lee, who subsequently cast Mackie in the 2004 Toronto Film Festival Masters Program selection Sucker Free City and She Hate Me. He also appeared in Clint Eastwood’s Academy Award-winning Million Dollar Baby, opposite Hilary Swank, Morgan Freeman, and Eastwood, as well as in Jonathan Demme’s The Manchurian Candidate, alongside Denzel Washington and Liev Schreiber, and in the comedy The Man, starring Samuel L. Jackson.

He made his MARVEL debut, in April 2014, as Sam Wilson/The Falcon in Captain America: The Winter Soldier. Opening at #1, earning over 96 million dollars and breaking the record for an April release. Mackie also starred alongside Scarlett Johansson, Chris Evans, and Sebastian Stan in the franchise’s second installment. The Falcon character made appearances in Avengers: Age of Ultron, Ant-Man, and Captain America: Civil War, the third installment in the Captain America franchise, which also opened to rave reviews and record-box office numbers. He appeared as Falcon in Avengers: Infinity War. The film earned an estimated $258.2 million in its debut weekend. In Spring 2019, Mackie reprised his role in the Avengers: Endgame and another box office blowout at $2.751 billion. Most recently, Mackie appeared in the Disney+ miniseries The Falcon and the Winter Soldier.

Mackie’s screen roles are a true testament to his depth and range. In 2009 Mackie was seen as Sgt. JT Sanborn in the Academy Award-nominated film, The Hurt Locker, earning him an Independent Spirit Award nomination. 2009 also saw Mackie re-visit the role of Tupac Shakur in Fox Searchlight’s Notorious BIG biopic Notorious, and he also starred as Major William Bowman in the Dreamworks film Eagle Eye. He was also seen in FOX’s critically acclaimed film The Hate U Give.

In 2011 Mackie was seen in Universal Pictures The Adjustment Bureau and the Disney/Dreamworks feature Real Steel. You can also catch him in Man on a Ledge, Abraham Lincoln: Vampire Hunter, Ten Year, Gangster Squad, Black or White, and Playing it Cool. Mackie also appeared in Pain & Gain, starring alongside Mark Wahlberg and Dwayne “The Rock” Johnson. The film earned over 20 million in its first weekend.

On the small screen, Mackie appeared in the 5th season of NETFLIX’s hit series, Black Mirror, where he starred in the Striking Vapers episode. He also starred in the streamer’s action-thriller Point Blank.Mackie also wrapped production in Budapest on NETFLIX’s action-sci-fi movie Outside The Wire, where he is both producing and starring in the film. He also starred in the second season of the NETFLIX series Altered Carbon, as well as in APPLE TV+’s The Banker. He can also be seen in FOX’s crime drama The Woman in the Window with Julianne Moore and Amy Adams.

Intertwined throughout his film career, Mackie was seen in several theatrical performances both on and off-Broadway. He made his Broadway debut as the stuttering nephew, Sylvester, alongside Whoopi Goldberg in August Wilson’s Ma Rainey’s Black Bottom. Next, he was played the lead in Regina King’s modern retelling of Chekov’s The Seagull, He also starred in Roundabout Theatre Company productions McReele and the Pulitzer Prize-winning play Soldier’s Play. Mackie was part of the Kennedy Center’s presentation honoring August Wilson’s legacy with stage readings of all ten plays. Mackie performed in 3 of the ten shows. In 2010 Mackie returned to Broadway starring in Martin McDonough’s latest creation, A Behanding In Spokane. He also reunited with Kerry Washington in the drama Night Catches Us.

Mackie resides in New Orleans, where you can find him building houses from scratch.