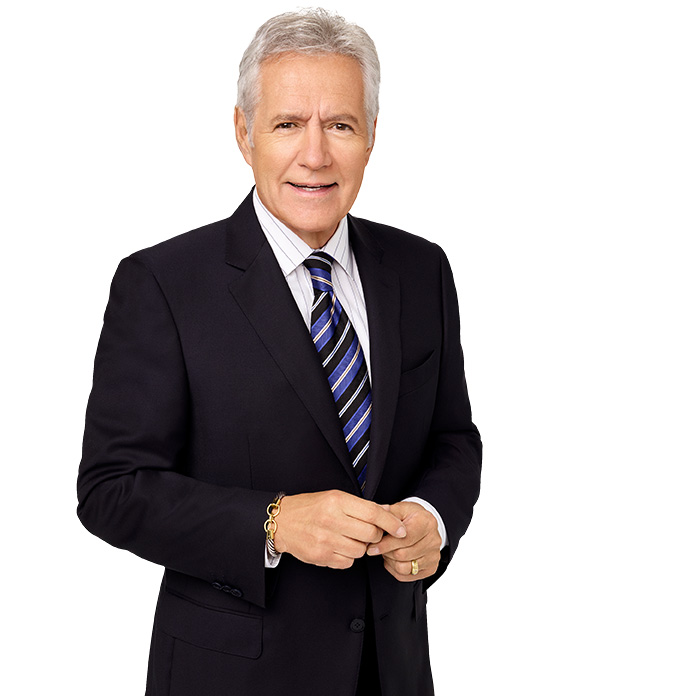 Alex Trebek has been the host of JEOPARDY! since America’s Favorite Quiz Show®’s syndicated debut in 1984. He has become one of television’s most enduring and iconic figures, engaging millions of viewers worldwide with his impeccable delivery of “answers and questions.” Trebek has won five Daytime Emmy awards for Outstanding Game Show Host as well…

Alex Trebek has been the host of JEOPARDY! since America’s Favorite Quiz Show®’s syndicated debut in 1984. He has become one of television’s most enduring and iconic figures, engaging millions of viewers worldwide with his impeccable delivery of “answers and questions.”

Trebek has won five Daytime Emmy awards for Outstanding Game Show Host as well as a Lifetime Achievement Award from the National Academy of Television Arts and Sciences. Trebek holds a Guinness World RecordsTM record for Most Game Show Episodes Hosted by the Same Presenter; he has hosted more than 7,300 episodes of JEOPARDY! (and counting).

In 2013, Trebek was inducted into the Broadcasting & Cable Hall of Fame, and in 2011, he and JEOPARDY! received the Peabody Award for “encouraging, celebrating and rewarding knowledge.” He is one of the few celebrities to have been honored with a coveted star on both the Hollywood Walk of Fame and the Canadian Walk of Fame.
“I think what makes Jeopardy! special is that, among all the quiz and game shows out there, ours tends to reward and encourage learning.”

Born in Sudbury, Ontario, Trebek attended the University of Ottawa, where he earned degrees in philosophy. After university, Trebek worked for the CBC, covering national news and special events for radio and television. He made his American television debut in 1973 as the host of NBC’s game show “Wizard of Odds,” and after several other hosting roles, he became the host of JEOPARDY!.

Trebek has maintained strong ties to the University of Ottawa: he has created scholarships, sponsored a Lecture Series, and supported the construction of Alumni Hall, which, in May 2015, was named in his honor. He was conferred an Honorary Doctorate and he received the Meritas Tabaret Award for Alumni Achievement, the top award bestowed on University of Ottawa alumni. He is a long-time supporter of World Vision and has travelled to many third-world countries on behalf of that organization.

Trebek lives in Los Angeles with his wife, Jean. They have two adult children: Emily, an event planner in Los Angeles, and Matthew, the owner of OSO, a Mexican restaurant in Harlem.

A Conversation With Alex Trebek