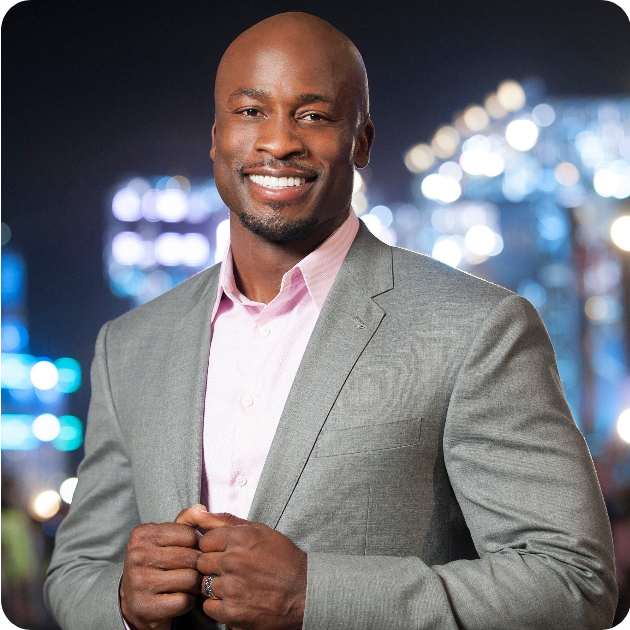 Akbar Gbajabiamila, a Southern California native, parlayed a five-year stint in the NFL into a career in television as a host and actor.

Akbar Gbajabiamila, a Southern California native, parlayed a five-year stint in the NFL into a career in television as a host and actor. He is currently the host of NBC’s hit show American Ninja Warrior, which follows competitors as they tackle a series of challenging obstacle courses in both city qualifying and city finals rounds across the country. Gbajabiamila also currently hosts NFL Networks’ highest rated show NFL Fantasy Live.

Gbajabiamila was also a fan-favorite on the 2009 ABC adventure series Expedition Impossible where he was hand-selected by producer Mark Burnett to compete in challenges across the globe.  Gbajabiamila has always lived an active lifestyle, one that combined social consciousness with athletic success.

An undrafted NFL free agent in 2003, Gbajabiamila played for the Oakland Raiders, San Diego Chargers and Miami Dolphins before retiring in 2008. During the duration of his professional football career, Akbar was looking for what’s next in his non-playing career and how he could use those skills and assets to help others.

In 2005, he was selected as one of the NFL’s first athletes to be in their Broadcast Boot Camp, held at NFL Films in Mount Laurel, New Jersey, that was designed to give 20 players a short and rigorous look into the skills needed to embark on a broadcast or journalism career after their playing days were over. With his playing career over, Akbar turned his focus to television, serving as an analyst for the NFL Network and hosting NBC’s American Ninja Warrior.

He recently made his feature acting debut in the 2015 short film The Sac Fly, and previously co-starred in the Funny or Die skit Internet Cops with Nnamdi Asomugha.

Akbar has a long history of volunteering and social consciousness. He currently serves as a board member for the Asomugha Foundation, an organization aimed at creating better educational opportunities for impoverished communities. As a collegiate undergrad, Akbar joined Athletes for Education, a youth education program where he was able to promote financial literacy for youth in the San Diego community.

An Evening with Akbar Gbajabiamila

How Do You Say My Name - Akbar Gbajabiamila