Convocation speaker tells new students to shake it up 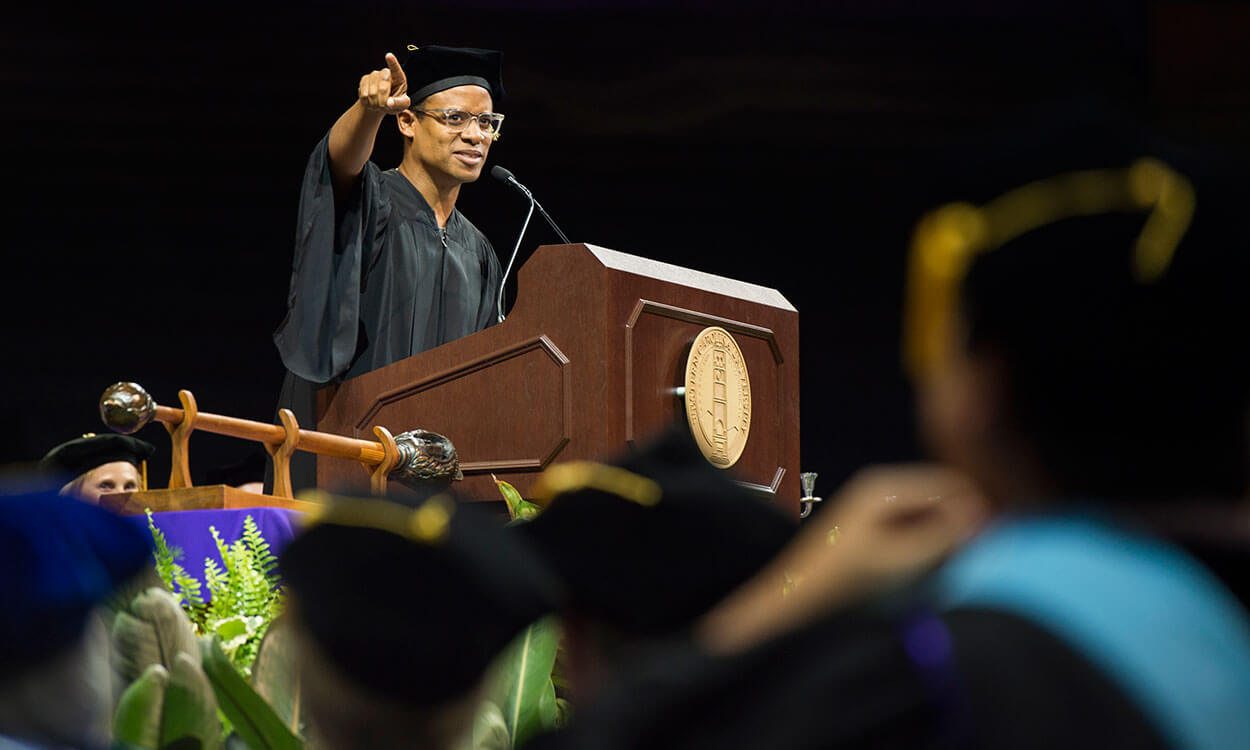 A stand-up comedian told Western Carolina University’s new students that they need to step outside their comfort zones and not be afraid to fail as he spoke to them during the university’s annual New Student Convocation.

Jordan Carlos, who is best known for his work as a TV writer and on-air contributor for “The Colbert Report” and “The Nightly Show with Larry Wilmore,” spoke to the newest Catamounts – including both freshmen and transfer students – on Friday, Aug. 18, at Ramsey Regional Activity Center. Many of the students were ending a day that included moving into their residence hall rooms with the help of their families and members of WCU’s Welcome Team of volunteers.

After the convocation, the students gathered on the football field at E.J. Whitmire Stadium for the taking of the Class of 2021 photo.

Carlos said the fact that he majored in economics and is now a comedian, and the question of how that happened, is something he hears about every Thanksgiving, but studying economics helped him learn what makes people tick.

“I’m not going to suggest that you become an economics major and then switch to comedy because I can’t take any more competition, but I will tell you that you’ve got to get out of your comfort zone, intellectually. Seriously, shake it up,” he said. “If you never fail at anything in college, then you have failed in college.”

In her welcome to the students, Provost Alison Morrison-Shetlar said the university received more than 19,500 applications for about 1,950 slots in the freshman class. “And you got them,” she said. “Because you made the cut, you will have the opportunity to work with an unbelievable faculty – national and international rock stars in chemistry, geosciences, recreational therapy, entrepreneurship, musical theatre, education, psychology, creative writing, art, history, marketing and sport management.

“They are here because they care about you,” Morrison-Shetlar said. “They love to teach and work with smart and motivated students.”

She gave the new students three suggestions for maximizing their experience at WCU – to be an “active agent” in making their success happen; to get involved in campus organizations and activities; and to graduate in four years.

“Work hard, study hard, play hard and make these four years everything they can be, and then graduate,” Morrison-Shetlar said.